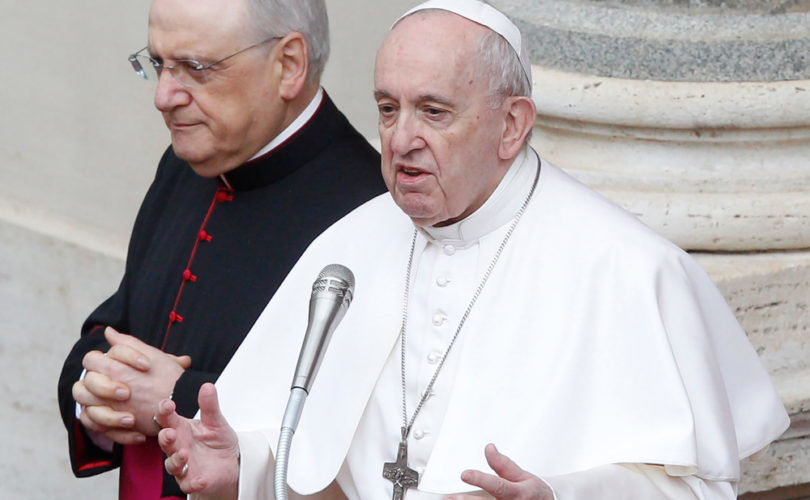 ROME, May 24, 2021 (LifeSiteNews) – Pope Francis promoted a vision of the Catholic Church less concerned with “combating paganism” or “inculcating rules” while once again ignoring the Chinese Uighur genocide in his public remarks on Pentecost.

“The Paraclete is telling the Church that today is the time for comforting,” the Pope said in his homily on Sunday. “It is more the time for joyfully proclaiming the Gospel than for combating paganism. It is the time for bringing the joy of the Risen Lord, not for lamenting the drama of secularization.”

“It is more the time for testifying to mercy than for inculcating rules and regulations,” he added.

“Today, if we listen to the Spirit, we will not be concerned with conservatives and progressives, traditionalists and innovators, right and left,” Pope Francis continued, condemning ideologies of “right and left.”

“When those become our criteria, then the Church has forgotten the Spirit. The Paraclete impels us to unity, to concord, to the harmony of diversity,” he said. “An ‘-ism’ is an ideology that divides and separates.”

Francis’ new stance on ideologies is a curious one for a pope who has come to be seen as an international leader of such leftist “isms” as environmentalism and humanitarianism, and who has previously endorsed communism.

“It has been said many times and my response has always been that, if anything, it is the communists who think like Christians,” Pope Francis told atheist journalist Eugenio Scalfari in 2016. “Christ spoke of a society where the poor, the weak and the marginalized have the right to decide. Not demagogues, not Barabbas, but the people, the poor, whether they have faith in a transcendent God or not,” he reportedly said.

In Pope Francis' Regina Caeli address for Pentecost, he offered some comments about the crisis of anti-Catholic persecution in China. The pontiff appeared to respond to the recent closure of a Marian shrine in Shanghai amid ongoing discrimination against Catholic sites during the COVID-19 crisis, as well as China’s ban on children in churches.

“The Mother of the Lord and of the Church is venerated with particular devotion in the Sheshan Shrine in Shanghai, and is invoked assiduously by Christian families, in the trials and hopes of daily life,” Francis said. “How good and how necessary it is that the members of a family and of a Christian community are ever more united in love and in faith!”

“In this way, parents and children, grandparents and grandchildren, pastors and faithful can follow the example of the first disciples,” he added. The pope then exhorted listeners “to accompany with fervid prayer the Christian faithful in China, our dearest brothers and sisters, whom I hold in the depth of my hearts.”

The day before, AsiaNews revealed that Chinese authorities detained Bishop Zhang Weizhu of Xinxiang last week, along with numerous priests and seminarians from the “underground” Catholic Church. “In the space of just two days, almost all the ecclesiastical personnel of the apostolic prefecture of Xinxiang were wiped out with an operation by the police forces of the province of Hebei,” the outlet reported.

The communist government of China has ramped up harassment of both Catholic clergy and laity despite last year’s reauthorization of the 2018 Vatican-China deal, which some activists have credited with aggravating attacks on Catholics.

“No clergy imprisoned before the deal have been released, and several have been arrested, detained, and disappeared since the deal was agreed,” Catholic human rights advocate Benedict Rogers wrote in Foreign Policy last summer. “Far from bringing the desired unity or protection for the church, it has caused greater division and more repression.”

Pope Francis’s Regina Caeli address also included no mention of China’s other egregious human rights abuses, like the mass detainment of the western Chinese Uighurs. The address, which invoked the “right to peaceful protest” in Columbia and a recent volcanic eruption in the Congo, continued the pope’s months-long pattern of silence on what the United States recognizes as a genocide.

Since 2016, the Chinese government has interned up to three million mostly Muslim Uighurs, killing some and systematically sterilizing or sexually abusing others. Francis briefly noted the “poor Uighurs” in a book in December, though he has ignored them in otherwise political sermons on Christmas and Easter.