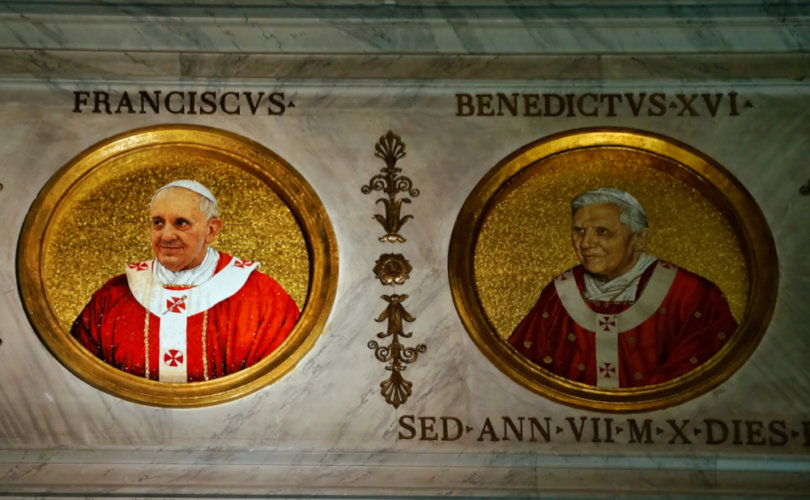 VATICAN CITY, January 13, 2021 (LifeSiteNews) — Pope Emeritus Benedict XVI is to become one of the first in the Vatican to receive an abortion-tainted COVID-19 vaccine, as part of the Vatican’s own vaccination roll-out commencing today.

Pope Benedict’s personal secretary Archbishop Georg Gänswein spoke to the German language edition of Catholic News Agency (CNA), saying that Benedict would receive it “as soon as the vaccine is available.” Gänswein noted that he would receive the jab along with Benedict, as would “the whole household of the Mater Ecclesiae Monastery” where Benedict is living.

In a television interview aired on Sunday night, Pope Francis also stated that he would receive the vaccine, calling it “an ethical choice,” adding that “I’ve signed up. One must do it.” Francis went further, adding that “ethically, everyone should take the vaccine.”

“I don’t understand why some say, ‘No. Vaccines are dangerous,’” the Pope said. “If it is presented by doctors as a thing that can go well, that has no special dangers, why not take it? There is a suicidal denial that I wouldn’t know how to explain.”

The 84-year-old pontiff became one of the first to receive his dose of Pfizer’s abortion-tainted vaccine this morning, and will have his second injection in three weeks. While there were no photos of the event, the Vatican press room confirmed the news to Argentine newspaper La Nacion.

The Vatican COVID vaccinations are beginning today in the Pope Paul VI Audience Hall, where a special fridge has been placed in order to accommodate the exceptionally low temperatures necessary for the storage of the Pfizer vaccine. The head of the Vatican health service, Dr. Andrea Arcangeli, said: “Priority will be given to health and public safety personnel, to the elderly and to personnel most frequently in contact with the public.”

Speaking to Vatican News in mid-December, Arcangeli announced how Vatican residents and employees would be receiving COVID vaccinations in January, mentioning it was “very important” that a “vaccination campaign” was started as soon as possible. He even referred to “our duty to offer all residents, employees and their families the opportunity to be immunized against this dreaded disease.”

At the time, Arcangeli said the Vatican would be using the Pfizer vaccine, but that others would be administered subject to approval. The first doses of the Pfizer jab in Italy were given shortly after Christmas, with the Moderna vaccine being approved last week, and deployed January 12. As of Tuesday, January 12, over 650,000 people in the country had been injected with COVID vaccines in apparent efforts to prevent the spread of the virus.

Both the Pfizer and Moderna vaccines, along with the Oxford/Astra Zeneca vaccine which is currently awaiting approval in the country, have connections to abortion.

Pro-life organization Children of God for Life notes that the Pfizer vaccine was tested using the HEK-293 cell line, which is derived from kidney tissue taken from a baby who was aborted in the Netherlands in the 1970s.

The group also compiled research showing that Moderna “extensively” uses the “aborted fetal cell line HEK-293” in the “fundamental design of mRNA technology, their Spike protein and in the research, development, production and testing.” The proteins used in the vaccine itself and the mRNA “were built on technology that extensively used aborted fetal cells, rendering the vaccine absolutely immoral from start to finish.”

Meanwhile, the Oxford/Astra Zeneca vaccine has been developed from the cell lines of an aborted baby, the cell line HEK-293, and also uses the fetal cell line in design and testing.

While the Vatican’s Congregation for the Doctrine of the Faith (CDF) issued a statement assuring Catholics they could take even an abortion-tainted COVID vaccine if there are no ethical alternatives available, many bishops and cardinals have spoken up against such a message.

In a paper released on December 12, Bishop Athanasius Schneider, along with co-signers Cardinal Janis Pujats, Bishop Joseph Strickland, and Archbishops Tomash Peta and Jan Pawel Lenga, expressed the strong conviction that any use of a vaccine tainted with the “unspeakable crime” of abortion “cannot be acceptable for Catholics” under any circumstances.

Cardinal Raymond Burke, former Prefect of the Supreme Tribunal of the Apostolic Signatura, has previously spoken out against vaccines using aborted babies, saying “it must be clear that it is never morally justified to develop a vaccine through the use of the cell lines of aborted fetuses. The thought of the introduction of such a vaccine into one’s body is rightly abhorrent.”

In addition to this, in a recent episode of the John-Henry Westen show, Catholic biologist and author Pamela Acker described how the babies involved in the abortion-tainted COVID vaccines were actually alive when they were extracted for their body parts.

“They will actually deliver these babies via cesarean section. The babies are still alive when the researchers start extracting the tissue; to the point where their heart is still beating, and they’re generally not given any anesthetic, because that would disrupt the cells that the researchers are trying to extract.”

Referring to the news of Pope Benedict and Pope Francis taking the vaccine, prominent Catholic commentator Deacon Nick Donnelly wrote: “How is this not seen as condoning abortion, in some circumstances, if it produces medically useful products?”

“If the Pope and bishops had stuck with the principle that all abortions are abominable crimes and the Church will have nothing to do with them, maybe a vaccine would have been developed that wasn’t tainted with abortion,” he noted. “But instead they collapsed like a house of cards. Again.”