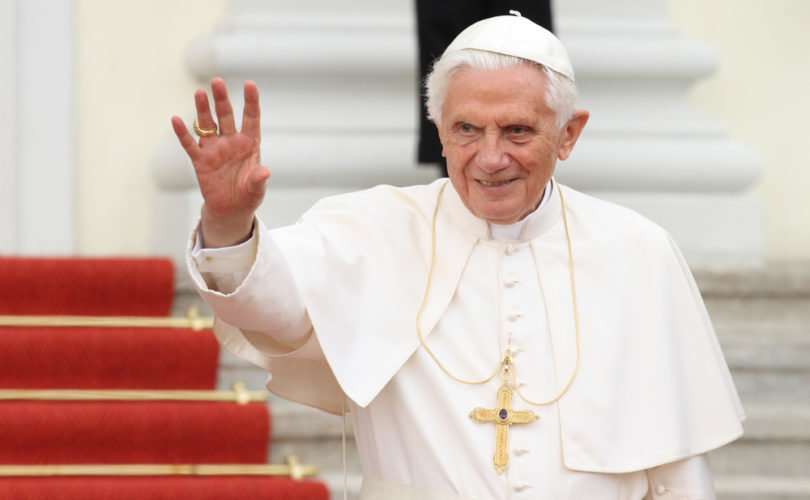 VATICAN CITY, April 11, 2019 (LifeSiteNews) – Pope Emeritus Benedict XVI stated in a letter published yesterday on the abuse crisis that his own works were banned in some seminaries and those caught reading them were considered “unsuitable for the priesthood.”

While discussing how the post-Vatican II “conciliarism” led to a dismissal of the Church’s traditions, the retired pontiff, 91, intimated that men had been barred from the priesthood if they were “caught” reading his books.

“There were — not only in the United States of America — individual bishops who rejected the Catholic tradition as a whole and sought to bring about a kind of new, modern ‘Catholicity’ in their dioceses. Perhaps it is worth mentioning that in not a few seminaries, students caught reading my books were considered unsuitable for the priesthood. My books were hidden away, like bad literature, and only read under the desk,” Benedict wrote.

Benedict's claim is not an exaggeration.

Fr. Christopher Smith, an American Catholic priest who contributes to the liturgical website “Chant Cafe”, wrote in 2011 of a warning he received as he was engrossed in the former Cardinal Ratzinger’s The Spirit of the Liturgy.

“I had just entered the seminary when Cardinal Ratzinger’s book, The Spirit of the Liturgy, came out,” Smith recalled.

“I had an English copy expressed to me and brought it with me into the chapel as my spiritual reading during our daily community Holy Hour. One of the older men knelt next to me as I was engrossed in Ratzinger’s chapter on Rite and whispered, “Do you want to get kicked out of the seminary? Change the book cover now.”

“All of my attempts to not publicise the fact that I actually knew the Old Latin Mass had apparently been blown out of the water by this defiant act of wanton schism,” Smith continued.

“Suddenly seminarians began to knock on my door and counsel me how to survive the seminary, and so I exchanged Ignatius Press’ book cover for one entitled ‘The Pastoral Letters of Paul VI’.”

Smith did indeed survive the seminary although, as he recounted, he was punished by an examining liturgist for knowing anything about the traditional Latin Mass.

Bizarrely enough, although some seminaries punished men who read Ratzinger, at least one seminary was open to showing them pornographic films.

In his discussion of the post-conciliar attitude towards tradition, the Pope Emeritus wrote:

In many parts of the Church, conciliar attitudes were understood to mean having a critical or negative attitude towards the hitherto existing tradition, which was now to be replaced by a new, radically open relationship with the world. One bishop, who had previously been seminary rector, had arranged for the seminarians to be shown pornographic films, allegedly with the intention of thus making them resistant to behavior contrary to the faith.