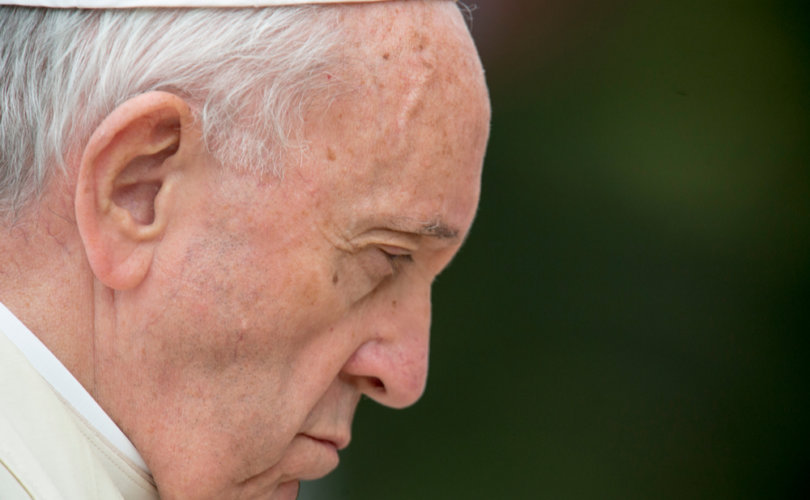 VATICAN CITY (LifeSiteNews) – In a speech penned for the “climate change” COP26 conference currently taking place in Glasgow, Pope Francis has signaled the Vatican’s alignment with the pro-abortion Paris Agreement.

The Pope’s message to the assembled global leaders, politicians, and businessmen called for “greater human, financial and technological resources” to address the “negative effects of climate change and assisting the poorer and more vulnerable nations most affected by it.”

Delivered by Vatican Secretary of State Cardinal Pietro Parolin, who is leading the Holy See’s delegation to the conference, the Pope’s text contained no references to God, the Catholic Church, the Catholic faith or even Christian doctrine regarding man’s stewardship of the earth.

Instead, Francis drew on themes from his “blasphemous” 2020 encyclical Fratelli Tutti and called for “profound solidarity and fraternal cooperation between the world’s peoples” to fight climate change.

The Pontiff urged the conference attendees to pursue the “ambitious goals” outlined in the Paris Agreement on climate change, saying they “can no longer be deferred.”

“There is no alternative. We can achieve the goals set by the Paris Agreement only if we act in a coordinated and responsible way,” he said. “Those goals are ambitious, and they can no longer be deferred. Today it is up to you to take the necessary decisions.”

Pope Francis also asked for “climate finance, decarbonization in the economic system and in people’s lives,” adding that “daily actions and economic and financial investments” must be oriented to “a ‘healthy’ planet.”

Mentioning “a growing ‘ecological debt,’” Francis demanded that there be “a more sustainable and just economic restructuring aimed at meeting the climate emergency.”

As such, he demanded that “developed countries … help pay the ecological debt by significantly limiting their consumption of nonrenewable energy and by assisting poorer countries to support policies and programmes of sustainable development.”

Such language echoes that of Network of Central Banks and Supervisors for Greening the Financial System (NGFS) – a little-known international conglomerate of central banks committed to enforcing the Paris Agreement in line with the Great Reset. All of the NGFS’s green policies and plans align closely with the World Economic Forum’s (WEF) anti-Christian Great Reset.

The WEF, founded and led by Klaus Schwab, has used the COVID-19 virus as an opportunity to present its plan of a Great Reset of complete societal alteration and structural shifts. In June 2020, Schwab wrote that the coronavirus outbreak was exacerbating “the climate and social crises,” and that as a result the world would become “less sustainable, less equal, and more fragile.”

An essay on the WEF website called on “governments” and “regulators” to use “hard dollars and soft power” in order to “mandate and incentivize” the “sustainable investments” necessary for a “cleaner, greener future.”

Similar themes were proposed by Schwab himself, who described how businesses that were deemed to not be “green” enough would be shut down by external protests and withdrawal of financial investors.

The Pope, while still avoiding any mention of a spiritual or moral crisis, compared the “wounds inflicted on our human family by the Covid-19 pandemic and the phenomenon of climate change” with those stemming from a “global conflict.”

“Today, as in the aftermath of the Second World War, the international community as a whole needs to set as a priority the implementation of collegial, solidary and farsighted actions,” he wrote.

Pope Francis continued his warning tone, referring to the pro-abortion Paris Climate Agreement and declaring how “far we remain from achieving the goals set for tackling climate change.”

“We need to be honest: this cannot continue! Even as we were preparing for COP26, it became increasingly clear that there is no time to waste,” he added.

Such terminology has often been used by Pope Francis, who in March called for a “new world order,” saying the “drama of wasting” the COVID-19 “crisis” would be worse than the disruption caused by COVID measures across the globe.

Pope Francis had originally been due to attend the conference in person “for a very short” visit but subsequently decided to remain in Rome and send Cardinal Parolin in his stead.

His address drew swift support from the Catholic Agency for Overseas Development in England and Wales (CAFOD), with the organization’s pro-abortion director praising how Pope Francis was “highlighting how the current global economic models, policies and industrial systems are disastrous to the planet, and the cause of untold suffering and injustice to the world’s most vulnerable communities.”

“The Church is at the forefront of the climate issue because the Church is there in communities; those very communities that are facing the impact of climate change,” CAFOD’s Christine Allen said.

Pope Francis has been focused on the COP26 conference in recent days, delivering an entirely non-spiritual BBC Radio address on October 29, calling for “radical decisions” to respond to “the unprecedented threat of climate change.” Two days later, at his Sunday Angelus, the Pope asked for prayers for the global leaders to hear and respond to the “cry of the earth” and “of the poor.”

Furthermore, Vatican News has released the text of a book forward Pope Francis has written “in conjunction with COP26,” which reflects on the ecological encyclical Laudato si and features a special commentary from UN Secretary General António Guterres. The work deals with the “ecological crisis” and a “failure to care for our common home.”

However, the start of COP26 has been marked by controversy, with media outlets highlighting the hypocrisy of global leaders taking private jets to attend a climate conference.

Scotland’s Daily Record noted that more than “400 private jets” were being used to transport the more than 1,000 global leaders, staff and businessmen. Such a number of planes, wrote the Daily Record, would “produce more global warming gas than 1,600 Scots burn through in a year.”

Meanwhile, the Daily Mail produced a graphic detailing the flight plans of 52 of the planes, containing politicians and businessmen, some of who “will be urging others to cut down on air travel and eat less meat.”