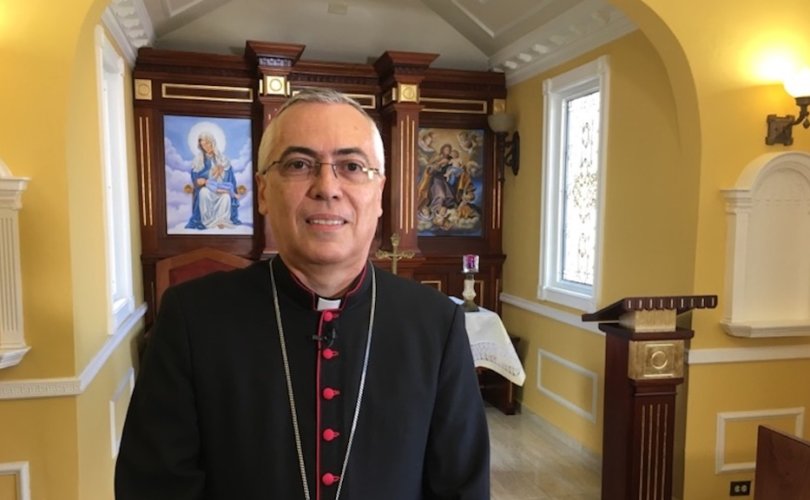 The Holy See announced that Pope Francis “relieved” the Arecibo bishop from pastoral care of his diocese in a March 9 notice.

Bishop Fernández Torres, 57, a staunch defender of life and family and an opponent of COVID vaccine mandates, protested his removal as “totally unjust” in a statement Wednesday.

The bishop, who led the Diocese of Arecibo for nearly 12 years, noted that Pope Francis’ apostolic delegate to Puerto Rico verbally requested that he resign, but said that he refused to do so, as he “did not want to become an accomplice of a totally unjust action.”

“No process has been made against me,” Bishop Fernández Torres wrote, “nor have I been formally accused of anything, and simply one day the apostolic delegate verbally communicated to me that Rome was asking me to resign.”

“However, I did not resign because I did not want to become an accomplice of a totally unjust action and that even now I am reluctant to think that it could happen in our Church.”

“I deeply regret that in the Church where mercy is so much preached, in practice some lack a minimum sense of justice,” he continued. “I express my communion in the Catholic faith, with the Pope and my brothers in the episcopate, despite my perplexity at an incomprehensible arbitrariness.”

The Vatican also summoned Bishop Fernández Torres for a meeting in Rome, he said, but he declined, citing COVID-19. The bishop had resisted sending seminarians to the Interdiocesan Seminary of Puerto Rico, which the Vatican approved in 2020, according to Catholic News Agency.

Pope Emeritus Benedict XVI initially appointed him as auxiliary bishop of the Archdiocese of San Juan in 2007, before naming him to the Diocese of Arecibo in 2010.

Bishop Fernández Torres’ dismissal came after he declined to join a statement issued by Puerto Rico’s six other bishops in August announcing that the faithful would be segregated at Mass based on their COVID-19 vaccination status.

The August letter also imposed a strict vaccine mandate for clergy and Church employees and claimed that “there is no basis” in Catholic teaching to reject compulsory vaccination.

Bishop Fernández Torres had released a separate statement the week before, stressing that Catholics can indeed refuse COVID-19 shots in good conscience. He noted that all available COVID vaccines were produced or tested with cells derived from aborted babies.

“Respect for the conscience of the person is also Catholic doctrine,” the Puerto Rican prelate wrote, citing The Catechism of the Catholic Church. “Conscience, and its freedom, cannot be considered only as a civil right but is something intrinsic to our Catholic faith.”

“We remember that the value and defense of life, as well as the seriousness of the sin of abortion, are part of our religious beliefs as Catholics,” he added. “Therefore, it is possible for a faithful Catholic to have conscientious objection to the alleged mandatory nature of the Covid-19 vaccine.”

The bishop additionally authorized priests in his diocese to sign religious exemption letters for parishioners facing jab requirements. Puerto Rican Gov. Pedro Pierluisi Urrutia, a Democrat, had recently issued a series of vaccine mandates targeting hundreds of thousands of workers and students across the island.

Bishop Fernández Torres’ position echoes that of several other Catholic leaders, including the bishops’ conferences of South Dakota and Colorado, and does not contradict the Church’s doctrinal statements on vaccination.

But Pope Francis has aggressively pushed the COVID-19 jabs as a “moral obligation” in recent months and mandated the shots for Vatican priests and employees, the Swiss Guard, and travelers to Vatican City.

Along with his defense of conscience rights, Bishop Fernández Torres has been known for strong stands in support of Catholic teaching on life and the family.

In a March 2021 interview with LifeSiteNews, the bishop slammed a proposed bill in Puerto Rico that would have criminalized “any effort or treatment” to reduce or eliminate same-sex attraction or gender confusion in children, pointing out that many young people begin to identify as homosexual or transgender after sexual abuse. The bill would have effectively outlawed Catholic moral teaching, he warned.

“Is it a crime to be a Christian in Puerto Rico?” the Arecibo bishop wrote in a letter to the Senate of Puerto Rico last year. “Indeed it is when it is intended to impose, under penalty of accusations of ‘institutional abuse,’ that our religious institutions teach something that is intrinsically contrary to faith, biology and human reason.”

Puerto Rican Catholic organization Fieles a la Verdad thanked him in an open letter for his “example of faith, courage and integrity” and “for helping us distinguish between dogmas of faith and indoctrination by the state and false prophets.”

At least one prelate has already offered his support to Bishop Fernández Torres. Archbishop Héctor Aguer, Archbishop Emeritus of La Plata in Argentina, published a statement Wednesday praising the ousted bishop’s leadership and blasting the Vatican under Pope Francis for “adhering to the principles of a New World Order.”

“Progressivism imposed by the Holy See advances relentlessly, without caring that it makes victims of men of God whose action leads the Church to flourish,” said Archbishop Aguer. “The bishop of Arecibo, Puerto Rico, Monsignor Daniel Fernández Torres, has been deposed from his diocese for defending conscientious objection, in the face of the ridiculous ‘moral obligation’ to be vaccinated imposed by the Holy See.”

“The current Church is no longer concerned with God, or with Christ’s mandate to evangelize, but only with imposing ‘new paradigms’ and adhering to the principles of a New World Order, alien to natural law and Christian revelation,” he continued. “The case of Monsignor Fernández Torres is a very clear example of how the Church works in reverse of what its mission should be.”

“A couple of years ago I was invited by Bishop Daniel to preach the Spiritual Exercises to the clergy of the diocese. I was then able to see how a particular Church flourishes when its bishop is a man of God, faithful to the great ecclesial Tradition,” he recalled.

“But that does not interest Rome. As never before, Roman centrality is imposed in the name of ‘unity.’ These positions make us yearn for the freedom that the great Popes supported, supporting the episcopate that was committed to the growth of the Church, and the evangelization of those who were still outside of it.”