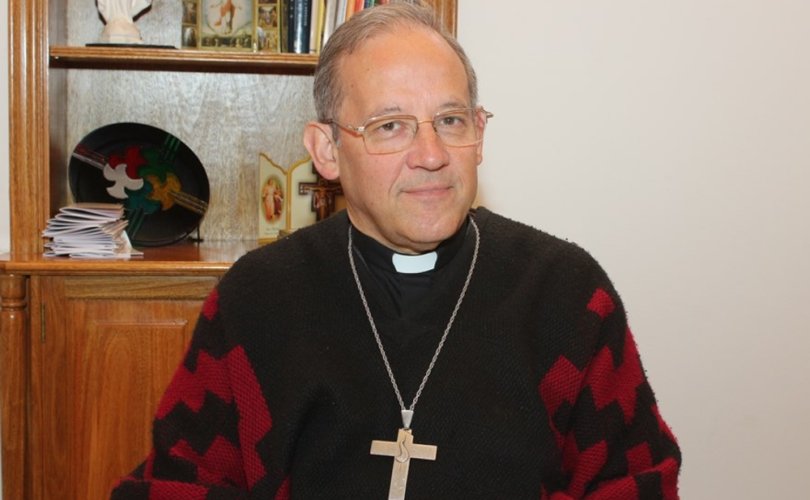 (LifeSiteNews) — Marking the end of 18 months of tension in the Diocese of San Rafael in the province of Mendoza, Argentina, Pope Francis accepted the resignation of Bishop Eduardo Maria Taussig, who had incurred the anger of many of his faithful when he prohibited the distribution of Holy Communion on the tongue as an anti-COVID measure in June 2020.

Taussig also faced the ire of his flock because the diocese’s Holy Mary Mother of God seminary, which was flourishing compared with other seminaries, was closed because its professors and seminarians were also considered favorable to Communion on the tongue.

At the time, diocesan spokesman Father Antonio Alvarez said Bishop Taussig was not responsible for shutting down the seminary in August 2020 but that the decision came from the Congregation for the Clergy in Rome because of the “extent of disobedience” shown by professors and seminarians at “Santa Maria Madre de Dios,” who refused to distribute Communion only in the hand, as Bishop Taussig had ordered.

The news site of the Priestly Fraternity of Saint Pius X (FSSPX) questioned this explanation, suggesting that the real problem was that the seminary was too “traditional” and its faculty (a number of whose members were former alumni) and students did not “fully adhere to the Vatican II Council and to the Ratio Fundamentalis, the official Roman schedule for the formation of future priests.”

This appears to be corroborated by Alvarez’s statement, which said “the Holy See wanted the seminarians to be moved (to other seminaries) in order to be freed from this influence and to receive correct education in view of the priesthood.” It has not been made public how many of the 30 seminarians actually went to other seminaries or whether a number of them decided to halt their studies for the priesthood.

There is more than one paradox in this affair. Strangely enough, it was Bishop Taussig who reversed the order of his predecessor banning candidates to the priesthood from other locations in Argentina from joining the San Rafael seminary, and he was also active in encouraging the professors and clergy to perfect themselves, leading to the academic development of the institution. Some 30 students would go on to take doctorate and postgraduate courses elsewhere in Argentina, Europe and the United States.

Despite having a reputation as a member of a very Catholic family who had received a traditional priestly formation, Bishop Taussig submitted fully to Rome’s directions, in particular in June 2020 when, after a severe lockdown, churches were allowed to receive the faithful for public worship. He also adhered to the decision by Rome to close down the seminary. In late October, after a meeting with Pope Francis, he returned to his diocese with the message that the decision on the seminary was “not up for discussion.”  So why did Pope Francis accept his resignation?

At the same time, the Pope designated an “Apostolic Administrator” to lead the Diocese of San Rafael until a new bishop is chosen. Bishop Carlos Maria Dominguez of the order of the Augustinian Recollects, the Administrator, had been made auxiliary bishop of San Juan de Cuyo in 2019 by Pope Francis with whom he was close in his hometown of Buenos Aires.

According to the San Rafael diocese’s press office, Bishop Taussig repeatedly spoke with Pope Francis about his possible resignation in the face of a situation where many faithful were expressing their opposition to his and to the Pope’s decisions. The Pope is said to have given his full support to the bishop and encouraged him to stay on. It was at the end of 2021 that Taussig decided formally to tender his resignation, which Pope Francis accepted a few days ago, effective immediately, leaving him with the title of “Bishop emeritus” of San Rafael.

Among many confrontations at several demonstrations were people demanding Bishop Taussig’s resignation. A Mass he presided over in Malarguë was interrupted by a group of faithful with an “escrache.” In Argentina and Uruguay, this is a particular form of protest where activists go to a person’s workplace in order to make a public denunciation. Taussig was questioned and insulted and the protesters slashed the tires on his car. Signs were put up in front of the parish church accusing him of being “a wolf in sheep’s clothing.”

At a meeting in December 2020 with a local priest who had been held responsible for having instigated the attacks in his parish of Malarguë, Fr. Camilo Dib reportedly punched Bishop Taussig in the face and, after being held back by other priests, tried to assault his superior, who had fled to a neighboring room. Father Dib had never before shown himself to be anything than a “calm person.” He is the son of Syrian immigrants and had converted at age 11 from Islam to Catholicism.

Fr. Dib’s friends told the press that his outbreak of violence was due to “the extreme tension that arose from the authoritarianism demonstrated by Bishop Taussig over the previous months.” Dib underwent an automatic canonical sanction and was prevented from celebrating Mass or exerting any function of his priestly ministry in public or in private. A canonical process is underway.

At this point, Taussig traveled to Buenos Aires to celebrate Christmas with his mother but also to allow the temperature to go down in his diocese, where tempers were running high, and to “take a step back and reflect.”

But his temporary retirement did not result in the cooling of spirits and the faithful of San Rafael, who were on good terms with their bishop until the beginning of the COVID crisis when their attitude changed toward Taussig for following the rules indiscriminately and leaving them “orphans of a pastor.”

In accepting Taussig’s resignation, Pope Francis took a step that looked like caving in to public pressure on the part of a conservative (but sometimes overly aggressive) section of the faithful, allowing a man who was faithful to him to step down.

Time will tell whether the Apostolic Administrator will in turn irritate the Catholics of San Rafael as he may well show himself to be more progressive than Taussig.

Interestingly, Bishop Taussig’s farewell Mass was filmed and broadcast (together with a segment showing a prayer for Spiritual Communion while the distribution of the Host was underway) on Tuesday. The bishop can be seen distributing Communion mainly on the tongue.