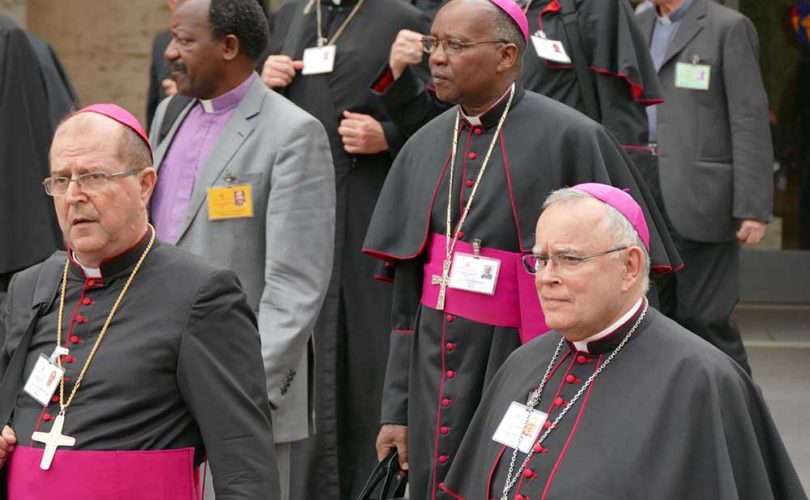 PHILADELPHIA, Pennsylvania, January 23, 2020 (LifeSiteNews) – Pope Francis has accepted the resignation of Philadelphia Archbishop Charles J. Chaput, who submitted the usual request at the age of 75, and appointed the current Bishop of Cleveland to succeed him. Chaput was held in high esteem by faithful Catholics for his outspoken defense of life, marriage, the family, and perennial Catholic teaching.

Chaput’s successor is Bishop Nelson Jesus Perez, 58. He has served as ordinary of Cleveland, Ohio since September 5, 2017. Perez was raised to the episcopate in 2012 by Benedict XVI, who appointed him the Auxiliary Bishop of Rockville Centre, a diocese in New York state. Prior to his episcopal ordination, Perez was chosen by St. John Paul II in 1998 as one of his Chaplains and granted the title of “Monsignor.” He was named “a Prelate of Honor” by Benedict XVI in 2009.

The Archbishop-elect of Philadelphia has a B.A. degree in Psychology from Monclair State University and both a Master of Divinity degree and a Master of Theology degree from St. Charles Borromeo Seminary in Philadelphia. Fluent in English and Spanish, Perez will be the first Hispanic archbishop of the Pennsylvania diocese. His parents took refuge in the USA from Cuba.

Known for his advocacy for migrants, Perez has recently spoken out on behalf of the unborn. In April 2019, he praised the Ohio legislature and governor for passing a pro-life law that outlaws abortion when a heartbeat is detected. Perez said the bill “represents a major step forward in efforts to protect the sanctity of life.” He also asked laity to pray for the end of the “Culture of Death.”

Perez has, however, caused comment by his liturgical preferences. Last March he asked Catholics in Cleveland to stand after receiving communion instead of kneeling in prayer until the “distribution” has been completed. This was in accord with the General Instruction of the Roman Missal (GIRM), which allows bishops some license with the norms. The GIRM stipulates that  “The faithful kneel after the Agnus Dei (Lamb of God) unless the Diocesan Bishop determines otherwise” (n. 43).

Archbishop Chaput, who belongs to the Prairie Band of Potawatomi Indians, was the first Native American to be named an archbishop in the United States. He tendered his resignation, in compliance with canon law, in September on his 75th birthday. His service to the Church as Archbishop of Philadelphia, an office which he has held since September 8, 2011, has been distinguished.

“I began the conversation, asking the Pope what he intended to say to me with the words he had addressed to me when I greeted him the previous Friday. And the Pope, in a very different, friendly, almost affectionate tone, said to me: ‘Yes, the Bishops in the United States must not be ideologized, they must not be right-wing like the Archbishop of Philadelphia, (the Pope did not give me the name of the Archbishop) they must be shepherds; and they must not be left-wing,’” wrote Viganò.

Chaput is a steadfastly pro-life leader. Last year he condemned a pro-abortion Pennsylvania state representative for videotaping himself harassing several pro-life women and teenagers outside a Planned Parenthood facility. Chaput called for “broad participation” of a prayerful rally held outside the facility asking those in attendance to “meet the hateful actions” of Democrat Brian Sims “with the love of Christ.” In 2018, as the referendum to eliminate the pro-life Eighth Amendment to the Irish Constitution loomed, Chaput urged his diocese to pray for the troubled nation. In 2015, he wrote a column in which he stated that there is “no moral exquivalent to abortion” and that the deliberate killing of innocent life is a “uniquely wicked act.”

Chaput has also upheld the sanctity of marriage by interpreting the post-conciliar exhortation Amoris Laetitia  in a manner consistent with the perennial doctrine of the Catholic Church. In July 2016, he issued guidelines that stated divorced and civilly remarried Catholics could not receive Holy Communion unless they “refrain from sexual intimacy.” To allow such persons to receive communion “misleads people about the nature of the Eucharist and the Church,” the guidelines declared. Regarding the Dubia concerning Amoris Laetitia, questions tendered to the pontiff by four cardinals, Chaput told a reporter that he wanted Pope Francis to answer them.

He added that we should take Christ at his word, “and his words about divorce and remarriage, about it being adultery, are very clear.” There’s “just no doubt about what Jesus said in the Gospels.”

In 2018, Chaput urged Pope Francis to cancel the controversial youth synod happening in Rome in light of the sex-abuse crisis that the Church was facing. He also raised alarm over the Youth Synod’s working document for it’s watering down of the faith for young people. He told Pope Francis and members of the Synod of Bishops in October 2018 that “LGBTQ” and other such ideological language should not be used in the Synod document.

Chaput has also promoted Church doctrine related to homosexuality. In 2017 he published a column that rejected many of the ideas expounded in Fr. James Martin’s pro-LGBT book, Building a Bridge. Chaput wrote that “Jesus didn’t come to affirm us in our sins and destructive behaviors — whatever they might be — but to redeem us.”  He also issued diocesan guidelines that state that “under no circumstances” may priests and deacons in the Archdiocese of Philadelphia “take part in, witness or officiate at any civil union for same-sex persons.” Chaput continued by stating that “there is no truth, no real mercy, and no authentic compassion in blessing a course of action that leads a person away from God.”

Perez's Mass of Installation will take place on Tuesday, February 18 at the Cathedral Basilica of Saints Peter and Paul at 2 p.m.