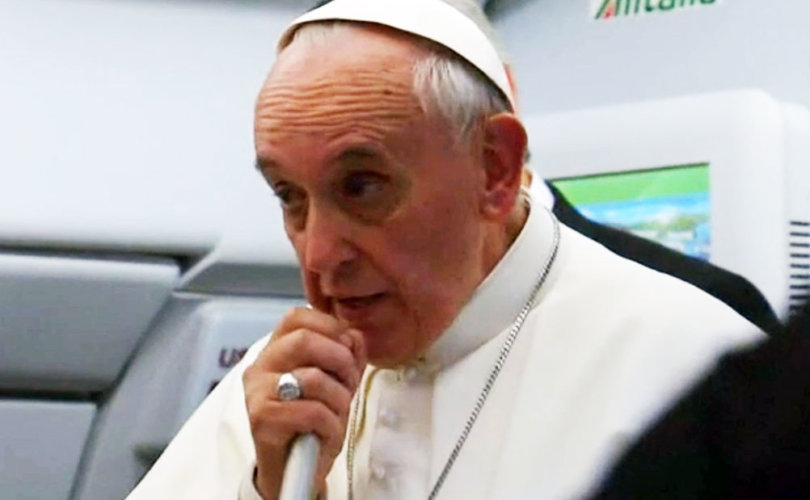 VATICAN CITY, June 16, 2021 (LifeSiteNews) — During a June 10 address to a group of Italian seminarians, Pope Francis urged the future priests to avoid the “perversion” of clericalism, advising that such a misuse of priestly authority leads to a kind of “rigidity,” a term the Pope has often used to malign traditionally-minded clerics and lay faithful alike.

In speaking to the members of the Pontifical Regional Seminary Pius XI of the Marche, Pope Francis first addressed those who are “primarily responsible for the formation of these young men.” he asked them to lead and form those under their instruction by their lives rather than by their words, in supposed imitation of St. Joseph, whom the Pope said formed Jesus in a “school of ‘creative courage.’”

The Pope requested that seminary leaders pass on their example of “obedience … industriousness … and generosity towards the poor” in their work of forming future priests. He then turned his attention to the gathered seminarians, whose role as students, he emphasized, is to follow the example of Jesus by being “docile” to their superiors, which is “a constructive attitude of one’s vocation and also of one’s personality.”

After explaining where he believes this docility should lead seminarians, namely, to becoming “experts in humanity” who “widen the limits” of their hearts, Pope Francis cautioned the group against “experiences that lead to sterile intimacies, of ‘gratifying spiritualism.’” The Holy Father warned that these “experiences” might “seem to give consolation,” but they instead “lead to closure and rigidity.”

While it remains unclear what exactly Pope Francis referred to by using the term “gratifying spiritualism,” the Pontiff did proffer a veiled explanation of what was intended by the phrase.

“Rigidity is somewhat fashionable today; and rigidity is one of the manifestations of clericalism,” the Pope said in what is now recognized as a recurring motif throughout the Argentine’s papacy. “Clericalism is a perversion of the priesthood: it is a perversion. And rigidity is one of its manifestations. When I meet a seminarian or a young priest who is rigid, I say ‘there is something wrong with him inside.’ Behind every rigidity there is a serious problem, because rigidity lacks humanity.”

LifeSiteNews contacted popular Catholic commentator and author Deacon Nick Donnelly, who explained and contextualized the Pope’s use of the term “rigid.”

“Pope Francis reserves the word ‘rigid’ for those who uphold obedience to the doctrines of the Church as a necessary characteristic of being a Christian,” Donnelly told LifeSiteNews, remarking that the Pope employs the moniker as a pejorative, despite it describing a fidelity to the Church’s bimillennial tradition. Donnelly continued by extolling such an obedience to tradition as being “rooted in the teachings of Christ (John 14:15) and the apostolic kerygma (Roman 1:5).”

However, “instead of seeing this as an authentic expression of discipleship, Pope Francis invariably suggests that such ‘rigidity’ is a sign of a sinister moral or psychological problem.”

“This must be the first time in the Church’s history that a pope disparages the honesty and integrity of the faithful for obeying Christ and his apostles,” Donnelly concluded.

Pope Francis has vilified young priests and seminarians as “rigid” on numerous occasions. On one such occasion the Pope suggested that those clerics who opt to don more traditional clerical garb, such as cassocks and clerical hats, possess a “rigid clericalism,” behind which there are “serious problems.” Additionally, young Catholics who love the Traditional Latin Mass have been accused of this same “rigidity.”

By contrast, Francis has consistently suggested that the Church must change herself to meet the people and times in which we live, since “[t]oday we are no longer the only ones who create culture, nor are we in the forefront or those most listened to.”

The Pope has relied on an often misrepresented quotation of St. John Henry Cardinal Newman, canonized by Francis himself, in order to substantiate his argument that the Church must reform in accordance with “epochal changes.” In his Essay on the Development of Christian Doctrine, Newman wrote: “Here below to live is to change, and to be perfect is to have changed often.”

Dr. Peter Kwasniewski, editor of “Newman on Worship, Reverence, and Ritual: A Selection of Texts,” told LifeSiteNews in 2019 that, while a “favorite line with modern Jesuits because for them it means progressivism: continual change, evolution, doctrinal creativity,” Newman himself meant something altogether different.

Kwasniewski explained that Newman was not advocating for justifying actions contrary to traditional morality or any other such reversal of ancient teachings. Instead, “He is talking about how the ‘idea’ (as he calls it) of Christianity expands, develops, diversifies, and enriches itself as it engages and is engaged with the world around it. It becomes more perfect in its self-understanding and self-expression through this interchange.”

“One need only think about how the challenge of heresies brought forth the great Church Fathers to defend the deposit of faith,” Kwasniewski added.