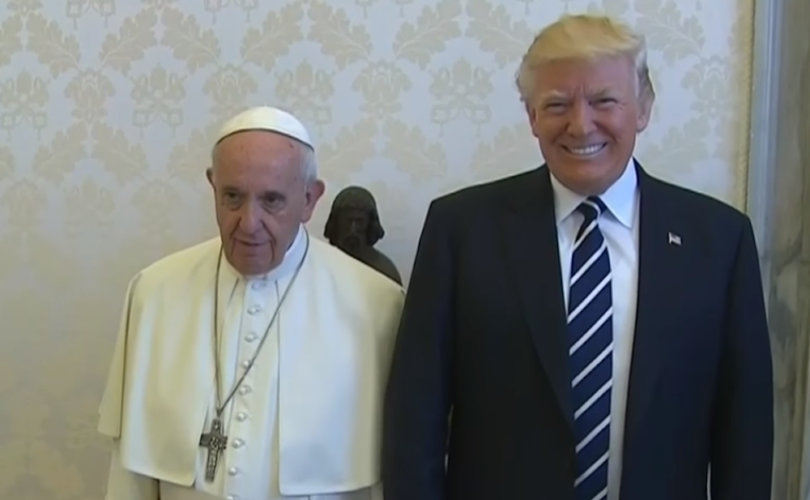 ROME, Italy, May 24, 2017 (LifeSiteNews) – Pope Francis and U.S. President Donald Trump met Wednesday morning and engaged in what the Vatican described as “cordial discussions” regarding U.S.-Holy See relations and a commitment by both to protect life and religious freedom.

Trump and the pope talked for half an hour behind closed doors in a conversation that also touched on healthcare, education and immigration, Vatican radio reported. The Holy See expressed its “satisfaction” with the meeting and said in a statement, “It is hoped that there may be serene collaboration between the State and the Catholic Church in the United States.”

The two leaders also discussed peace and interfaith dialogue, particularly regarding “the Middle East and the protection of Christian communities.”

The meeting took place in the Apostolic Palace. Trump then met with Vatican Secretary of State Cardinal Pietro Parolin and Holy See Secretary for Relations with States Archbishop Paul Gallagher.

Much was made in the media of their differences in the weeks leading up to the meeting. Numerous media outlets focused Wednesday on the pope giving Trump a copy of his environmental encyclical Laudato Si.

Pope Francis’ regular gifts to world leaders, which Trump received, include Laudato Si, along with his two apostolic exhortations, Amoris Laetitia and Evangelii Gaudium, and a signed copy of his World Day of Peace Message for this year.

Trump and Pope Francis disagree on the contested issue of manmade climate change and immigration, but they share similar stances on abortion, gay “marriage,” gender ideology and religious freedom.

The pope had said while traveling back from Fatima, Portugal, recently that he would not proselytize Trump on climate change. He said he would focus on common ground between them rather than differences on climate ideology or immigration. He said as well in regard to Trump that common ground could always be found.

“I never make a judgment about a person without listening to them,” Pope Francis stated. “I believe that I shouldn’t do this.”

Also, as with other world leaders, the Pope presented a large bronze medallion of an olive tree.

“It’s by a Roman artist, of an olive tree which is a symbol of peace,” the Pope said, according to National Catholic Register blogger Edward Pentin. “This is one of my great desires, that you can be an olive tree for peace.”

Trump replied, “We can use peace.”

Trump gave the pope a boxed set of books from Martin Luther King Jr., telling him, “I think you’ll enjoy them, I hope you do.”

Trump tweeted his reaction to the meeting afterward:

Honor of a lifetime to meet His Holiness Pope Francis. I leave the Vatican more determined than ever to pursue PEACE in our world. pic.twitter.com/JzJDy7pllI

The pope, who is also active on Twitter, had not responded to the meeting on the social media platform as of press time.

Trump’s meeting with Pope Francis was his third stop in a nine-day foreign trip during which he has met leaders of Muslim nations in Saudi Arabia and toured holy sites in Jerusalem.

Pentin reported that Trump made a point of greeting six American priests and sisters at the Vatican who work in the Secretariat of State, before he and First Lady Melania Trump were taken on a tour of the Sistine Chapel and St. Peter's Basilica.

Mrs. Trump had asked the pope to bless a religious item, Pentin wrote, likely a rosary.

Also greeting the pope after the private meeting were Ivanka Trump and her husband Jared Kushner. Other members of the president’s 12-member delegation on the trip followed, including Secretary of State Rex Tillerson, National Security Adviser H.R. McMaster, and Louis Bono, chargé d'affaires at the U.S. embassy to the Holy See.

As the Vatican visit concluded, Trump told Pope Francis, “Good luck,” and then added, “Thank you, thank you, I won’t forget what you said.”

After the meeting, Trump was set to meet with Italian President Sergio Mattarella and with Prime Minister Paolo Gentiloni.

Ivanka Trump also met with human trafficking victims at the Sant'Egidio lay community in Rome, and Melania Trump stopped at the Vatican-run Bambino Gesu pediatric hospital. Mrs. Trump visited children in the intensive care unit there, and she spent time praying alone in the hospital chapel, and laid flowers at the feet of the hospital’s statue of Our Lady.

Below the full statement on the Trump-Francis meeting from the Holy See press office:

This morning, Wednesday 24 May 2017, the Honorable Donald Trump, President of the United States of America, was received in Audience by the Holy Father Francis and subsequently met with His Eminence Cardinal Secretary of State Pietro Parolin, accompanied by His Excellency Msgr. Paul Richard Gallagher, Secretary for Relations with States.

During the cordial discussions, satisfaction was expressed for the good existing bilateral relations between the Holy See and the United States of America, as well as the joint commitment in favour of life, and freedom of worship and conscience. It is hoped that there may be serene collaboration between the State and the Catholic Church in the United States, engaged in service to the people in the fields of healthcare, education and assistance to immigrants.

The discussions then enabled an exchange of views on various themes relating to international affairs and the promotion of peace in the world through political negotiation and interreligious dialogue, with particular reference to the situation in the Middle East and the protection of Christian communities.