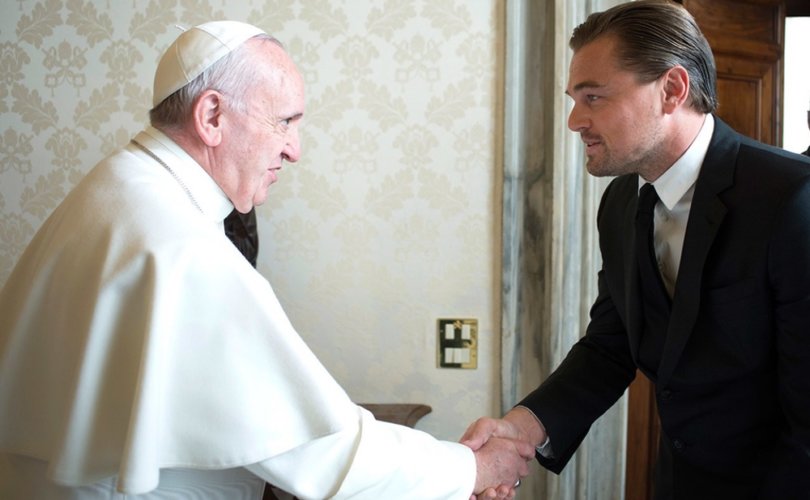 ROME, April 21, 2017 (LifeSiteNews) — Pope Francis made a climactic appearance in a National Geographic film about “global warming” that was narrated by Hollywood star Leonardo DiCaprio and released on DVD this week.

The film's climactic ending shows DiCaprio, the United Nation’s Messenger of Peace, being received at the Vatican by Pope Francis. According to the film, they spoke about the necessity of the “world community” accepting the “science” behind so-called climate change. The meeting took place in January 2016.

“One of the most important spiritual leaders on the planet…has now called upon the world community to accept the modern science of climate change. A pope has never done anything like this in history,” related DiCaprio in the film.

“He feels we all need to be speaking out about this issue as loud as we can, that we must immediately take action,” he said.

DiCaprio described Francis’ leadership on climate change as “inspirational and essential” in the inscription of a book that he gave to the pope during their visit.

Francis' 2015 encyclical Laudato si' called for a “broad cultural revolution” to reverse the effects of human activity on the planet. He has called upon Catholics to have an “ecological conversion,” telling them to confess sins against creation, such as using “plastic and paper,” not “separating refuse,” and not “turning off unnecessary lights.”

Under Francis’ watch, the Vatican has hosted numerous conferences on topics such as the environment, sustainability, and population, involving some of the Church’s most vocal opponents to Catholic teaching on life, marriage, and family. Some of these speakers include Bernie Sanders, Ban Ki-Moon, Jeffrey Sachs, Paul Ehrlich, and John Bongaarts.

The Vatican’s most recent conference, titled Biological Extinction, featured the pro-abortion population controller Dr. Paul Ehrlich. He told LifeSiteNews in an exclusive interview just days before the March conference that he was “thrilled” with the direction Francis is taking the Church.

Carleton University professor Michael Hart argued in his 2016 book Hubris that the climate change advocacy is based on “poor science.”

Hart made the case that “climate change” has become the Left’s new Trojan horse for ramming through its social agenda on an unsuspecting population.

Hart quoted philosopher of science Jeffrey Foss whom, he says, sees how environmental science has become the new religion with its own god, its own unique sins, and its own ultimate solution.