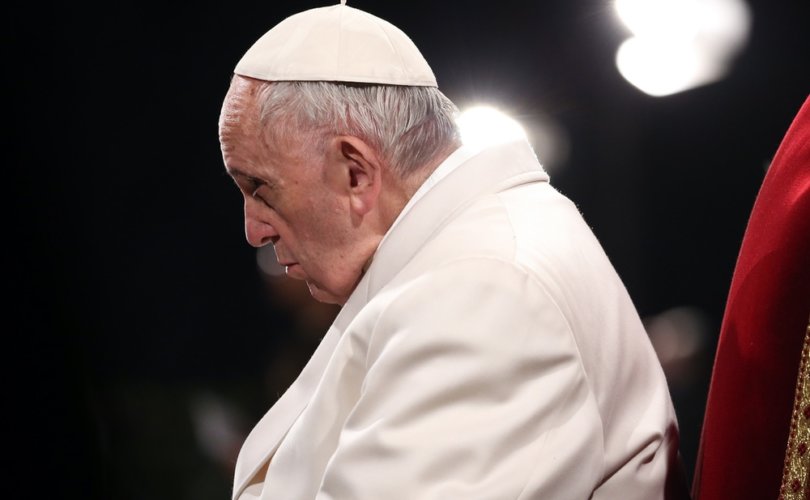 December 9, 2019 (LifeSiteNews) – Pope Francis has drawn a comparison between the separation of children and parents by border authorities and the actions of “Herod,” in what appears to be a criticism of U.S. President Donald Trump.

“I must admit that I am shocked by some of the narratives I hear in Europe about borders,” the pontiff said. “Populism is gaining strength. In other parts there are walls that even separate children from parents. Herod comes to mind.”

The Pope did not elaborate further. The name “Herod” is most commonly associated with “Herod the Great,” who is best known for what is referred to as “the slaughtering of the Innocents,” an event described in the Gospel of Saint Matthew. King Herod gave the order to execute all the male children two years old and under in Bethlehem and surrounding regions in an effort to kill the newly born Jesus Christ.

Many in the pro-life movement draw a parallel between those innocent slaughtered children and innocent unborn children killed in the womb by abortion.

Pope Francis made his “Herod” comment last week at a meeting with Jesuits from Southeast Asia during his visit to Thailand and Japan. In response to a question about extending hospitality to refugees, he said:

The phenomenon of refugees has always existed, but today it is better known because of social differences, hunger, political tensions and especially war. For these reasons, migratory movements are intensifying. What is the answer the world gives? The policy of waste. Refugees are waste material. The Mediterranean has been turned into a cemetery. The notorious cruelty of some detention centers in Libya touches my heart. Here in Asia we all know the problem of the Rohingya. I must admit that I am shocked by some of the narratives I hear in Europe about borders. Populism is gaining strength. In other parts there are walls that even separate children from parents. Herod comes to mind. Yet for drugs, there’s no wall to keep them out.

Trump has been widely criticized in the mainstream media for allegedly separating children from their parents as families are caught trying to enter the U.S. illegally. He is also well-known for emphasizing the need to stop illegal immigration and has spoken repeatedly about the need to “build a wall” on the U.S. southern border. Trump has repeatedly mentioned stopping the smuggling of drugs across the U.S.-Mexico border in his calls for a wall.

Pope Francis has not given any explanation about why borders and “walls that even separate children from parents” bring “Herod” to his mind. He also did not clarify what specifically about Herod came to his mind, or indeed whether he was referring to the murderous “Herod the Great,” who ruled a part of Judaea at the time of the birth of Jesus Christ, or to his son “Herod Antipas,” to whom Jesus was brought before shortly before his Crucifixion.

Herod is not commonly associated with either the construction of border walls or the imposition of strict immigration laws.