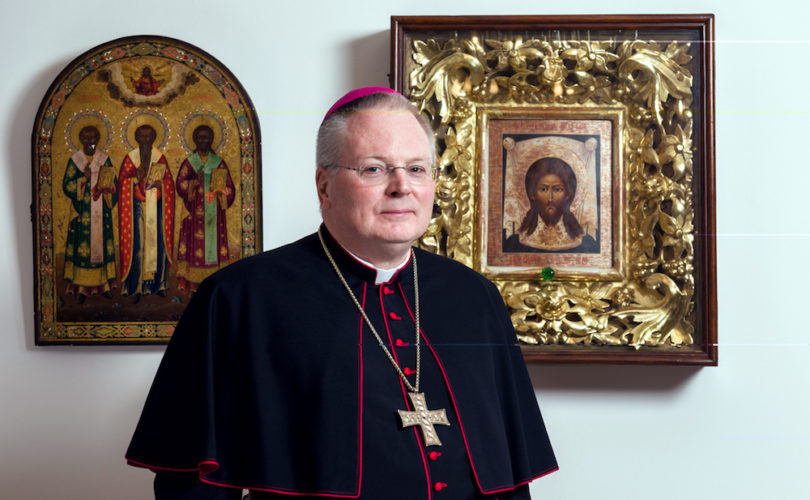 BERN, Switzerland, February 15, 2016 (LifeSiteNews) – Swiss Catholics – or at least, the progressive fringe of Swiss German-speaking Catholics – are angry at the recent nomination of a new papal nuncio to Bern, and they are making themselves heard. In an open letter to the new ambassador of the Holy See, the canon and co-dean of Bern, Fr. Christian Schaller, hoped that Archbishop Thomas Gullickson would show enough “sensitivity in order to perceive the realities of the Church in Switzerland” and accused him of “pastoral imprudence” in proposing to shut down parishes without priests. Behind a pleasant appeal to a “meeting” and an end to mutual “prejudice” lurks a condemnation of Archbishop Gullickson’s purported preference for the traditional teachings of the Church, especially in the moral sphere.

The letter was the last in a series of critical moves against the American nuncio whose previous post, in Ukraine, had put him in touch with starker realities.

A group of lay Catholic “reformers” formed an alliance called “Enough!” in the wake of articles in the Swiss media in January portraying Gullickson’s latest actions proving that he is an “anti-liberal.” Things got even worse from their point of view last week, when he retweeted an article in which Cardinal Juan Luis Cipriani Thorne, archbishop of Lima, Peru, called UN bureaucrats promoting the legalization of abortion because of the Zika virus scare “Herods in suits and ties.” Gullickson has never hidden his preference for reverent liturgy, the Latin Mass, and other signs of traditionalism that have led his Swiss detractors to accuse him of being a follower of the Priestly Fraternity of St. Pius X.

The twelve Catholic groups forming the alliance claim to be working for a “liberating and inclusive Church.” Late last month, “Enough!” wrote an open letter to the president of the Swiss Federal Council, Johann Schneider-Ammann, asking him to intervene in order to obtain Archbichop Gullickson’s revocation, accusing him of “hate speech” and of constituting a menace for the unity of the Swiss Church.

Markus Arnold, head of the Religious Education Department of Lucerne University, signed the letter asking the Swiss president “not to allow Gullickson to have a long-term, poisonous effect on the climate in Switzerland”: “We have enough problems with religious fanaticism as it is. We do not need a nuncio who wants to revive this fanaticism in the Catholic church,” he wrote. He accused Gullickson of “radical 19th century preaching.”

All accuse the archbishop of opposing the Second Vatican Council which “condemned,” they say, the anti-liberalism of the Pius popes.

What authority would the Swiss president have to intervene in affairs that are so very clearly internal to the Catholic Church?  Archbishop Gullickson calls himself an “ultramontanist” – that is, a Catholic faithful to Rome. But why should the president of a lay country be angry about that? The unity of Catholics in Switzerland is all the less a concern of Schneider-Ammann that Switzerland is decidedly multi-denominational. The presence of more traditionally-minded Catholics would merely be one more variety of Christian beliefs.

But Archbishop Gullickson has been critical of the pope, according to “Enough!” Erwin Koller, president of the Herbert-Haag-Foundation for Freedom in the Church, called the nuncio’s supposed attitude toward Pope Francis “offensive”: “If a Swiss diplomat had said such things about the Swiss government, he would long since have been dismissed.” But Gullickson’s attitude to Rome – which is sometimes critical, but certainly not offensive towards the pope – is obviously no business of the Swiss government.

What a number of Swiss Catholics don’t like is in fact the way in which Gullickson portrays several problems in the Catholic Church in Switzerland: he “disseminates blogs which accuse the German bishops' conference of being heretical and has a predilection for linking ultra-conservative texts in his blogspot,” complained the former Abbot of Einsiedeln,  Benedictine monk Martin Werlen, shortly after the new nuncio took up his new functions in October.

The Swiss Catholic Women’s League also asked for the support of Parliament member Doris Leuthard, who is a member of their association, in asking for Gullickson’s removal.

One of the main reasons for all this agitation is that the conservative-minded Bishop Vitus Huonder of Coire will be 75 in 2017 and will have to present his resignation. The papal nuncio has a first-hand role in the nomination of his successor. Swiss progressives are afraid he will be replaced by a prelate who will reiterate Huonder’s statements on the sinfulness of homosexuality. Archbishop Huonder went on record as saying that homosexuals – as well as couples living together outside marriage – may not receive Holy Communion.

Coupled with fears that Gullickson will destroy “ecumenical” relations with Swiss Protestants, these concerns are putting German Swiss Catholics very much in line with the mainstream media. They are apparently very happy with their own situation, as depicted by the new nuncio – dwindling vocations, progressive morality, empty churches and priestless parishes.

A Dominican priest, Viktor Hofstetter, wrote a comment in the press asking Gullickson to read Pope Francis’ catalogue of sins as exposed to the Curia last year.