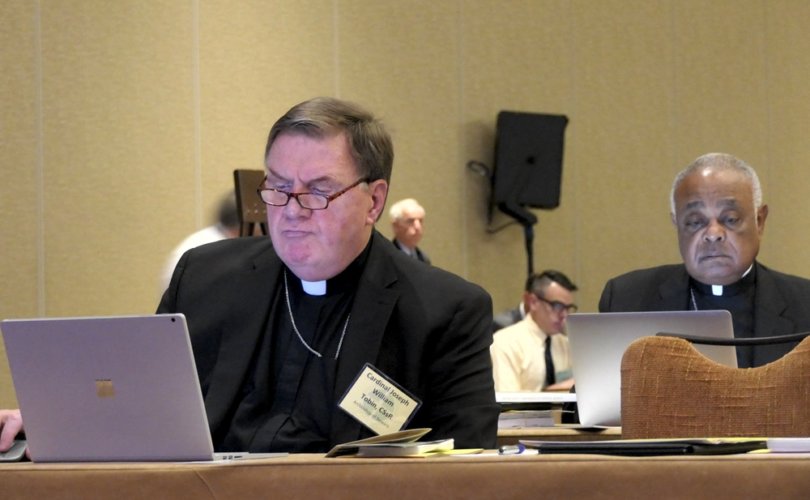 NEWARK, New Jersey, June 6, 2019 (LifeSiteNews) — Newark archbishop Cardinal Joseph Tobin, who has come under fire for statements at odds with Church teachings about sexuality, was named by Pope Francis as a member of the Congregation for Catholic Education.

In addition to Cardinal Tobin, Cardinals Luis Ladaria and Désiré Tsarahanzana and Bishop Joseph Ðình Ðúc Ðao were named to the congregation. The Congregation for Catholic Education is responsible for communicating and ensuring the implementation of the directives of the Holy See at Church-affiliated schools, institutes, colleges, and universities.

Cardinal Tobin said in a nationally televised program in April that Catholic teachings on same-sex attraction are “disordered” and “unfortunate” and use “hurtful” language. On NBC’s Today show, Tobin suggested that the Church is about to change its teachings: “The Church, I think, is having its own conversation about what our faith has us do and say with people in relationships that are same-sex. What should be without debate is that we are called to welcome them.”

In the interview, show host Anne Thompson introduced discussion about homosexuality by praising Tobin, saying his “outreach to the LGBTQ community is in the mold of Pope Francis, despite some Church teaching.” She asked Tobin, “But how can you welcome people that you call ‘intrinsically disordered’?” Tobin answered, “Well, I don’t call them ‘intrinsically disordered.’”

She countered, “But isn’t that the Catechism of the Catholic Church?”

“That is,” Tobin said and added, “It’s very unfortunate language. Let’s hope that eventually that language is a little less hurtful.”

Just before assuming leadership of the Newark archdiocese, Tobin welcomed homosexual activists to the Cathedral-Basilica of the Sacred Heart, who came on a so-called “LGBT Pilgrimage.” Fr. James Martin, S.J., whom many have criticized for his statements supportive of homosexuality, congratulated Tobin on his participation in “LGBT Pilgrimage,” tweeting, “Bravo!” Tobin was one of four American bishops who endorsed Martin’s controversial book Building a Bridge. Martin suggested in 2018 that Tobin is one of the “gay-friendly” prelates appointed by Pope Francis.

Cardinal Joseph Tobin, notoriously known for having kept Italian actor Francesco Castiglione in his New Jersey chancery, along with tweeting out “Nighty-Night, baby” (supposedly to his sister), has just been given a position by @Pontifex overseeing the education. https://t.co/Dc4tjEiW8I pic.twitter.com/L53sqPlLGz

Under Tobin’s authority is Our Lady of Grace in Hoboken, which will hold what it touts as its “2nd Annual Pride Mass in Support of Our LGBTQ Brothers and Sisters.” Scheduled for June 30, the morning Mass is being advertised in LGBTQ media. The parish is encouraging those attending the Mass to participate in the gay pride march in New York City later that day.

Speculation has swirled since last year regarding a tweet Tobin posted and later deleted that read, “Nighty-night, baby. I love you.” Tobin claimed that the tweet was meant for his sister. He was later the focus of rumor when he reportedly confirmed that he had recently housed a young Italian actor in his residence for a period of time.

Archbishop Carlo Maria Viganò, a former papal ambassador to the United States, stated in his famous letter last year: “The appointments of Blase Cupich to Chicago and Joseph W. Tobin to Newark were orchestrated by [disgraced ex-cardinal Theodore] McCarrick, [Cardinal Oscar Rodríguez] Maradiaga and [recently deposed Washington, D.C. archbishop Cardinal Donald] Wuerl, united by a wicked pact of abuses by the first, and at least of coverup of abuses by the other two. Their names were not among those presented by the Nunciature for Chicago and Newark.”

They are contrary to the natural law. They close the sexual act to the gift of life. They do not proceed from a genuine affective and sexual complementarity. Under no circumstances can they be approved.

In addition, the Church teaches that homosexual inclinations are “objectively disordered” and a “trial” for the persons so inclined.