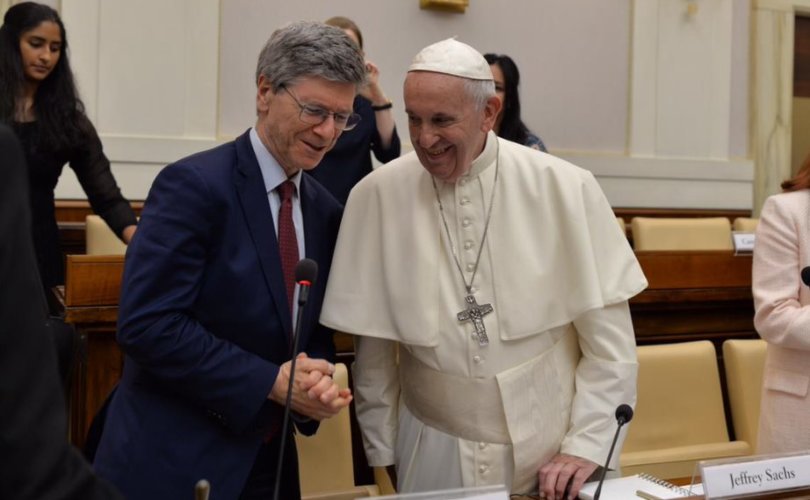 Sachs and Pope Francis at the Vatican in 2019. UN

VATICAN CITY (LifeSiteNews) – Pope Francis appointed prominent abortion advocate and supporter of the United Nations’ climate change-oriented policies Jeffrey Sachs as an ordinary member of the Pontifical Academy of Social Sciences in a move that has drawn significant criticism from concerned Catholics.

Announced October 25, the Vatican described Sachs, having been a regular visiting figure at the Academy for some time, as a “distinguished” professor while highlighting his work in “sustainable development” but avoiding any mention of his support for abortion.

The appointment prompted numerous Catholics to protest, with Bishop Joseph Strickland calling for the Pope to clarify his actions, and Restoring the Faith Media telling LifeSiteNews that Sachs’ “‘expertise’ is reduction of the global human population, an aspiration which squares perfectly with the naturalist worldview driving the radical, superstitious COVID agenda.”

Currently serving as director of the Center for Sustainable Development at Columbia University in New York, the 66-year-old has been a favorite of Pope Francis since the early days of the current pontificate.

In 2015, Sachs notably partnered with the Vatican to host and moderate a conference on climate change, a shared passion of both the Pope and the highly influential U.N. figure. However, as Elizabeth Yore noted at the time, the economist’s 2015 address was but the latest of “over nine appearances and speeches at the Vatican’s Pontifical Academy in the last three years.”

Since then, Sachs has continued as a regular visitor at the Vatican, including for key events such as the 2019 Amazon Synod, a 2019 Vatican youth conference based on the SDGs, a 2020 online conference on “a new world economy,” and the Pope’s 2020 launch of his partnership with the U.N. for education.

In a 2017 Vatican conference, Sachs yelled out at LifeSite’s John-Henry Westen, “You’re disgusting, you’re disgusting, disgusting,” in response to an article Westen had written in which he described Sachs as a “pro-abortion globalist.”

A former special adviser to current U.N. Secretary-General António Guterres on the U.N.’s SDGs, and for Ki-Moon when he was Secretary-General, Sachs has made no secret of his anti-life views.

In his 2009 book “Commonwealth: Economics for a Crowded Planet,” he called for the legalizing abortion as a cost-effective way to eliminate “unwanted children” when contraception fails to achieve that end. “To accelerate the decline in fertility … abortion should be legalized,” Sachs wrote.

Among the SDGs for which Sachs is heavily responsible, Goal 3.7 explicitly calls for “universal access to sexual and reproductive health care services,” terms that were defined by the U.N. in 1994 as meaning providing women with “modern contraception” for “family planning” and with “safe abortion” where it is legal.

Meanwhile, Goal 5.6 reads, “Ensure universal access to sexual and reproductive health and reproductive rights as agreed in accordance with the Programme of Action of the International Conference on Population and Development and the Beijing Platform for Action and the outcome documents of their review conferences.”

Sachs has even previously praised the Pope’s controversial encyclical Laudato Si for having “made possible” the passage of the SDGs.

Sachs’ membership of the Academy

In 2020, Catholic News Agency questioned Bishop Marcelo Sánchez Sorondo, the chancellor of the Pontifical Academy of Social Sciences, as to why Sachs appeared “with such frequency at Vatican conferences.”

Bishop Sorondo replied that it was “because he integrates the magisterium of the Church and of Pope Francis into economics by putting the human person and the common good at the center.” Sachs will now enjoy a 10-year period as an ordinary member of the Academy, after which he could be reappointed by the Pope following discussion with the President and the Council of the Academy.

Under the statues of the Pontifical Academy of Social Sciences, founded by Pope John Paul II in 1994, candidates must be “proposed to the President by at least two members,” and a “secret vote” is then held “to indicate the order of preference in which the candidates are to be proposed to the Supreme Pontiff.”

The Academy’s proclaimed aim is the “study and progress of the social sciences, primarily economics, sociology, law and political science,” in order to allow the Church to develop “her social doctrine,” and the implementation of this doctrine. The Academy works closely with the Pontifical Council for Justice and Peace.

News of the appointment sparked instant consternation from Catholics, with U.K. blogger Mark Lambert noting that Francis “maintains the facade of faith while perverting the contents. He’s been ‘incremental’ and a lot of folks are frogs wondering why the water is getting so warm.”

The Spectator’s Damian Thompson called for “prominent Catholic defenders of unborn life and Chinese democracy to criticise the Pope for this. If they don’t, they are complicit.”

Bishop Strickland of the Diocese of Tyler, Texas, also wrote to ask for prayers and imploring the Pope to “clarify this confusion.”

Speaking to LifeSiteNews, a spokesperson for Restoring the Faith Media said that “Sachs hates human beings. He wishes we were far fewer – billions fewer, in fact.”

“His lifelong ‘expertise’ is in the reduction of the global human population, an aspiration which squares perfectly with the naturalist worldview driving the radical, superstitious COVID agenda,” continued Restoring the Faith’s spokesman.

“This nomination furthers the already festering mistrust faithful Catholics have in this pontificate and widens the gulf between those earnestly seeking to practice the faith and the clerical consultant class, whom for the next two years it seems, are turning their gaze inward in an attempt to discover how vague notions of synodality, participation, and ‘mission’ can obfuscate the obvious collapse of the physical institutions,” he warned.

Similar concerns were shared by author and catechist Deacon Nick Donnelly, who highlighted the confusion created by the Pope’s actions. “Last week, Francis told pharmacists that they must not become accessories to the homicide of abortion, but this week appoints to the Pontifical Academy of Social Sciences one of the world’s leading proponents of abortion as a tool of population control,” he told LifeSiteNews.

“What are we to make of this contradictory behavior? Yet again Francis’s words and actions are at profound variance with each other.”