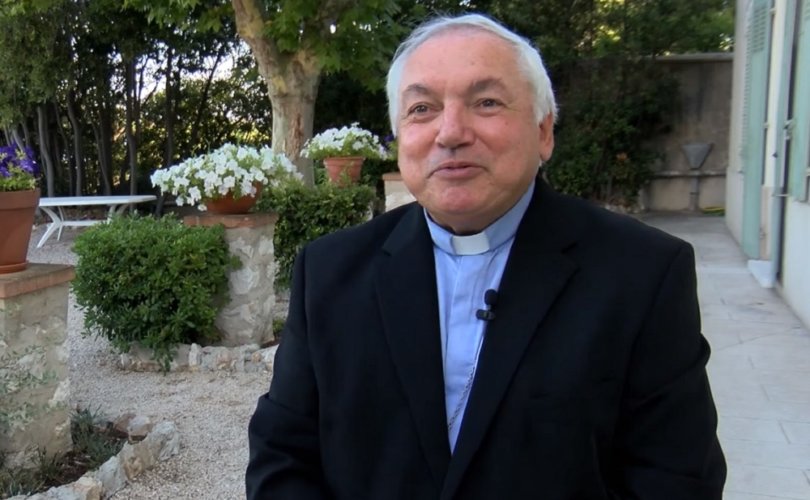 Bishop Jean-Marc Aveline, appointed in August 2019 by Pope Francis to be archbishop of Marseille, France.KTOTV / YouTube

August 16, 2019 (LifeSiteNews) — Pope Francis recently named a new archbishop for the major French city of Marseille on the Mediterranean coast: Bishop Jean-Marc Aveline, 60, best known for his commitment to “islamo-christian dialogue.” His nomination is a clear message to the large Muslim community of Marseille, both North African and Sub-Saharan. The northern districts of the city are infamous in France for their poverty and insecurity, violent crime, and drug-trafficking.

Jean-Marc Aveline was since 2013 auxiliary bishop of Marseille; before that, he was its vicar general. He succeeds Bishop Georges Pontier, who was archbishop for 13 years and who will be formally replaced on September 15, when the new archbishop is installed at the Cathedral of La Major.

In 2017, Aveline was named president of the Council for Interreligious Relations of the French Bishops’ Conference.

He was born in Sidi Bel Abbès in Northern Africa in 1958, Algeria, still being a French colony at the time. He studied in the south of France and at the modernist Institut Catholique de Paris before being ordained for the diocese of Marseille in 1984.

Aveline would soon found the Institut de sciences et théologie des religions (ISTR, Institute of sciences and theology of religions), which he also directed from 1992 to 2002. The said institute clearly promotes a relativistic view of religions, putting the Christian faith and Islam on the “same plane,” according to comments by Catholic journalist Yves Daoudal, who made an in-depth study of the case of the “martyred” monks of Tiberihine: Father Christian de Chergé and six of his companions were killed by Islamists-cum–political opponents in this desert region of Algeria in 1996 and were beatified last December, despite their more than welcoming attitude toward Islam, its beliefs, and the Koran.

Aveline chose as a referent “thinker” for his ISTR a certain Fr. Christian Salenson, who succeeded him at the head of that institute in 2002.

Salenson, who was also former director of the Seminary of Avignon near Marseille, illustrated his religious syncretism in 2010 when he published a homage to Fr. Christian de Chergé, who among other things had placed the Koran in the chapel of his monastery and used it for the lectio divina of the community.

Lectio divina, or divine reading, is the traditional monastic practice of prayerfully reading and meditating on sacred texts in order to promote communion with God and to increase the knowledge of His word. It is normally done by reading the Bible. Substituting the latter with the purportedly “sacred” texts of a false religion, such as the Koran, is antithetical to its purpose.

But this sort of exercise is at the heart of modernist “Islamo-Christian dialogue,” as it is officially practiced in France’s mainstream Catholic bodies, which, instead of promoting friendship and understanding between Catholics and Muslims in view of facilitating conversions to the true Faith, place their efforts in illusory “sharing” between the Islamic and the Catholic faith as such, where theological discussions are presented as searching the truths and convergences in both, not taking into account their radical incompatibility.

In his 2010 text, Salenson explained that “through personal experience,” Christian de Chergé “knew that Islam is a way that can accompany men and women on the path to God.” “Vatican II confirms him in this opinion,” he added, underscoring the “sincere respect” for the “rays of truth” in other religions recommended by Nostra aetate. However, this text speaks of “esteem” for Muslims and not for “Islam.”

But he went even further, saying: “The Church would be hard put today to say what is precisely the place of Islam in God’s design, but she is just as unable to reject this religious tradition on principle.” Salenson went on to explain that Fr. de Chergé thought that “in the bosom of the Father, Muslims remain ‘His children of Islam.’ They are children of the Father not despite their religious belonging but as believers of Islam,” he wrote — as if Muslims could accept the concept of the Fatherhood of God.

Archbishop Aveline is very much in this line, which he condoned as founder and director of the ISTR.

La Croix, the unofficial daily of the French episcopate, also presents Jean-Marc Aveline as a “faithful craftsman of interreligious dialogue” who will fit in well as head of the diocese of a “plural city especially marked by the rise of rigorist currents of Islam.” It quoted Aveline as speaking of “this atypical small Church which resembles that of the Maghreb.” It also indicated that Aveline has meetings with the imams of Marseille every six weeks.

The new archbishop especially noted the “very strong economical disparities between poor and rich parts of town, which endanger social bonding,” seemingly less interested in the challenge of announcing Christ’s truth to the Muslim population.

A self-proclaimed French progressivist blog was quick to hail Aveline’s nomination as proof of Rome’s and Pope Francis’s preference for “interreligious and ecumenical dialogue” in an “open Church.”

It is clearly in line with the “Document on Human Fraternity for World Peace and Living Together,” signed last February in Abu Dhabi by Pope Francis and the Grand Imam Al-Tayeb of Al-Azhar University, Cairo.