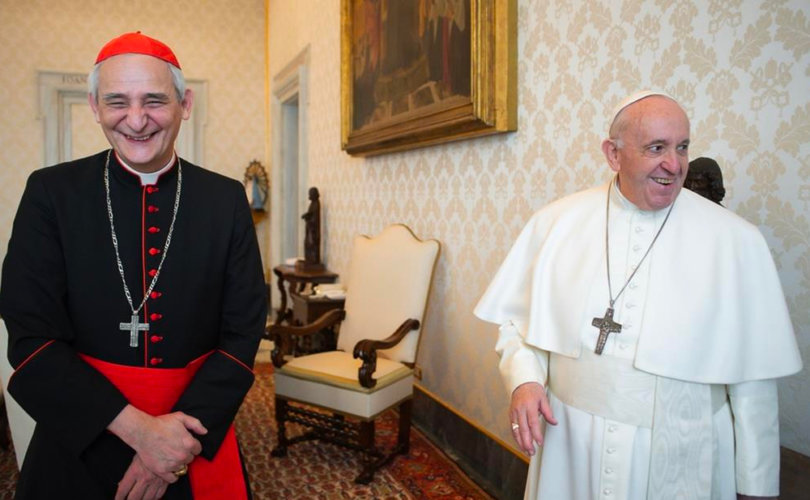 VATICAN CITY (LifeSiteNews) – Pope Francis has appointed a pro-LGBT cardinal to be the new president of the Italian Bishops Conference, two years after a Masonic Grand Master praised him as a potential Pope.

On the second day of the 76th General Assembly of the Italian Bishops’ Conference (CEI), Pope Francis chose Cardinal Matteo Maria Zuppi, the 66-year-old Archbishop of Bologna, to lead the CEI for the next five years.

Cardinal Zuppi had received the most votes from the assembled bishops, followed by the assembly’s second and third choices – Cardinal Augusto Paolo Lojudice and Bishop Antonino Raspanti.

Due to the intimate link between the CEI and the Roman Pontiff, the assembly of bishops vote for three candidates as president, and the Pope then selects the president from these three.

Zuppi was made cardinal on October 2019 by Pope Francis. He had previously been an auxiliary bishop of Rome from 2012 – 2015, before being appointed Archbishop of Bologna in December 2015.

Pope Francis, prior to the General Assembly, declared that he wanted “an authoritative cardinal” as leader of the CEI. Zuppi is considered by Vatican observers as a possible future Pope, or papabile, and is a familiar figure on Italian television networks.

Zuppi is widely regarded as a liberal in ecclesiastical circles, being a public proponent of LGBT ideology. In 2018 Zuppi penned an essay for the Italian translation of Father James Martin’s widely condemned pro-LGBT book, saying that the work was “useful for encouraging dialogue, as well as reciprocal knowledge and understanding, in view of a new pastoral attitude that we must seek together with our L.G.B.T. brothers and sisters.”

He also quoted Cardinal Kevin Farrell’s commendation of the book, noting “it will also help L.G.B.T. Catholics feel more at home in what is, after all, their church.”

Zuppi also praised another pro-LGBT work, written by an employee of the CEI in 2020, which called for a change in the Church’s teaching on homosexuality. Writing a preface for the work: “When in our communities we really begin to look at people as God looks at them, then homosexual people, and everyone else, will also begin to feel, of course, part of the ecclesial community, on the way.”

“Sexual orientation, which no one ‘chooses,’ is not separable from the identity of the person; in welcoming the person we cannot prescind from his or her orientation,” wrote Zuppi.

But even in the case where a person leads a lifestyle contrary to God’s law, should we not welcome him or her? What does it mean to welcome? Does it mean to justify? If Jesus had this criterion, before entering Zacchaeus’ house he would have demanded his conversion.

News of his appointment as CEI president was subsequently welcomed by notorious pro-LGBT priest Father James Martin SJ and the pro-LGBT site “gay.it.”

Gay.it wrote how Zuppi has “often made statements in support of the LGBT community, frontally attacking homophobia and misogyny.”

Zuppi has also received praise from a surprising quarter, when in 2020 a Masonic Grand Master spoke in support of Zuppi as a future Pope, or papabile.

Speaking in an interview in October 2020 Gioele Magaldi – a former Venerable Master of the prestigious Roman Masonic lodge “Monte Sion” and later the grand master of the Democratic Grande Oriente – revealed that Zuppi had performed Magaldi’s marriage and also backed the cardinal for the Papacy.

“However, I know the Vatican world and among the cardinals the one I respect most is Matteo Zuppi, who by the way married me. He would be a very good pope,” said Magaldi.

Reporting in 2019 on Zuppi’s rise to the cardinalate, Diane Montagna noted that Italian traditionalist blog “Messa in Latina” noted in then-archbishop Zuppi’s defense that he “has always, when asked, celebrated the Tridentine Mass.”

However, Zuppi has long been intimately linked the charismatic and pro-Muslim Sant’Egidio Community, having served as a parish priest at Rome’s Santa Maria in Trastevere parish from 1981-2010, and then as ecclesiastical general to the community.

The Community has been involved in organizing prominent ecumenical meetings in Rome, styled after the inter-religious 1986 meeting in Assisi.

The 2021 meeting organized by the group was described by the Lepanto Institute’s Michael Hichborn as “another form of idolatry in the form of a human brotherhood without Christ.”

Sant’Egidio is also noted to have a favorable position in Pope Francis’ Vatican, as signified recently by appointing Zuppi as cardinal as well as Matteo Bruni – a long-time member of the Community – as the Holy See Press Office director.