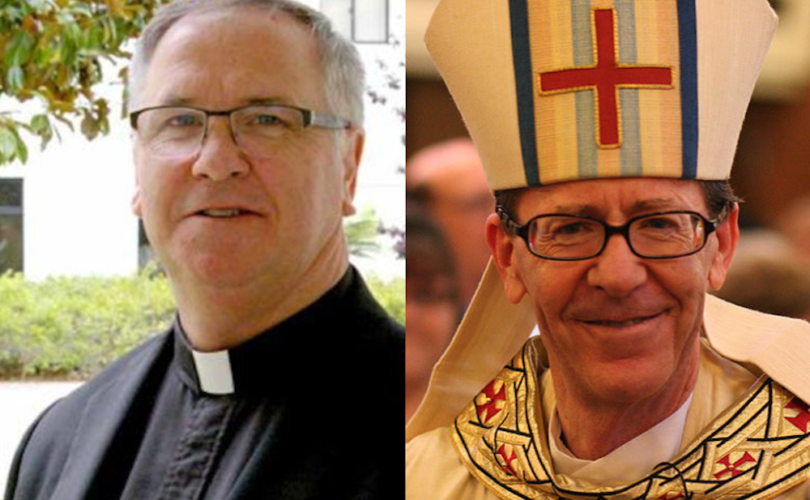 PHOENIX (LifeSiteNews) – Pope Francis has announced he is replacing the beloved pro-family Bishop of the Diocese of Phoenix, Arizona, with an avowedly pro-LGBT auxiliary bishop from San Diego.

“The Holy Father has accepted the resignation from the pastoral care of the diocese of Phoenix, United States of America, presented by Bishop Thomas James Olmsted,” reads the Vatican press release dated June 10.

“The Holy Father has appointed Bishop John Patrick Dolan, until now titular of Uchi Maius and auxiliary of San Diego, as bishop of Phoenix, United States of America,” adds the presser.

The decision has already been met with controversy among Catholics online, with many expressing their disproval with what has been felt as a purely “political” move.

“When I see the pope play such obviously political games with the episcopate, it makes me think of a misbehaving boy who’s so proud of himself b/c he thinks his father is unaware of his misdeeds. All the while, the father knows and will act in due time,” reacted Crisis Magazine editor-in-chief Eric Sammons.

When I see the pope play such obviously political games with the episcopate, it makes me think of a misbehaving boy who’s so proud of himself b/c he thinks his father is unaware of his misdeeds. All the while, the father knows and will act in due time. https://t.co/WJgGneFoTM

Very sad for the faithful in Phoenix 👇 https://t.co/miZzwsKSZK

While Dolan has been named by LifeSiteNews editor-in-chief John-Henry Westen as one of “America’s top 10 homosexuality-promoting Catholic bishops,” Olmsted has been a strong voice against the subversion of the Catholic view on marriage and sexuality for decades.

Olmsted has consistently called for Catholics to “authentically love” homosexuals by acknowledging the Church’s teaching that homosexual acts are “disordered,” making reference to both the natural law and the revealed Divine law.

Olmsted has also been on the forefront of the anti-pornography movement, encouraging young men to leave such vices behind and reclaim their true manhood.

Dolan, on the other hand, has taken a radically different stance on the Catholic moral teachings Olmsted has ardently defended throughout his time as bishop.

RELATED: US Bishop issues major call for men to join the battle for life and family: ‘We need to get off the sidelines’

In fact, when Dolan was first promoted Auxiliary Bishop of San Diego by Pope Francis in 2017, LifeSiteNews noted that as a priest he was the pastor of a scandalously pro-LGBT parish within the diocese that consistently defied the Church’s teaching on homosexuality.

His parish at the time, St. John the Evangelist in Hillcrest, employed an openly homosexual man as pastoral associate and director of young adult ministry and parish’s social media pages displayed “a cross superimposed on a rainbow flag.”

Dolan’s replacement of Olmsted as bishop of the Diocese of Phoenix is one of many appointments made by Francis in recent weeks that have been criticized as being intentionally anti-Catholic.

One of the 21 new cardinals appointed by Francis earlier this month was Dolan’s own superior bishop in the Diocese of San Diego, Robert McElroy.

McElroy, like Dolan, has a history of being a pro-LGBT prelate and has even claimed that “The deposit of faith is not an inert and abstract body of teaching,” but rather that changes can be made to so-called “reformable Church doctrine.”