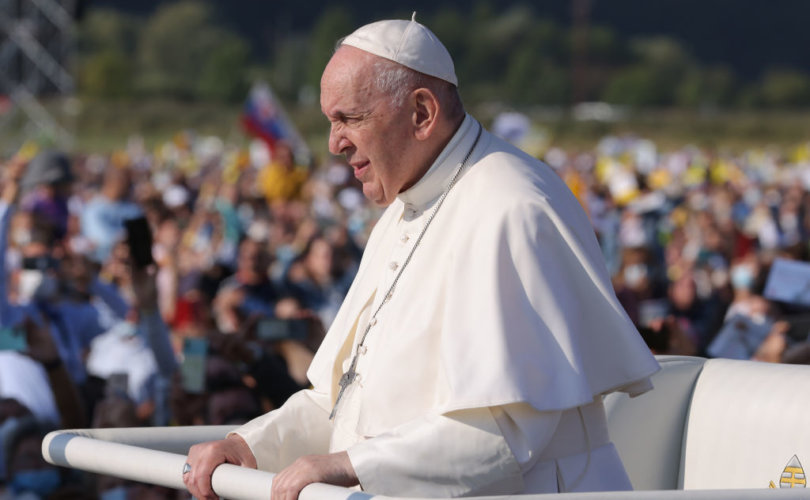 VATICAN CITY (LifeSiteNews) – Pope Francis has appointed three women to the Dicastery for Bishops, the Catholic Church’s office for appointing the world’s bishops.

It is a historic first.

On Wednesday, Francis announced that three women will take their places on the previously all-male Vatican Dicastery for Bishops, including two religious sisters and one laywoman in what marks another novel appointment by the Holy Father.

According to the Holy See Press Office, the three women are Franciscan Sister Raffaella Petrini, F.S.E., who currently serves as the Secretary General of the Governorate of the Vatican City State; Sister Yvonne Reungoat , F.M.A, a former Superior General of the Daughters of Mary Help of Christians; and finally Dr. Maria Lia Zervino, current President of the World Union of Catholic Women’s Organizations.

Zervino, who also serves as a consultant to the Pontifical Council for Interreligious Dialogue, is the first laywoman to take on a leading role in the Dicastery.

In addition, several high-ranking clergymen were appointed alongside the three women, including Cardinal Mario Grech, Secretary General for the Synod of Bishops, and Cardinal Arthur Roche, the Prefect of the Dicastery for Divine Worship and the Discipline of the Sacraments.

While the members of the Dicastery for Bishops play an important role in evaluating episcopal candidates, presenting their analyses to the Pope for his consideration, the decision on who becomes a bishop ultimately rests with the Pope.

The Pope alluded to today’s announcement in comments  he made during his July 2 interview with Reuters Vatican reporter Philip Pullella. At the time, Francis explained his vision of expanding the leadership role of women within the Vatican, stating that “things are opening up a bit.”

Continuing, the Pontiff revealed that he is “open to giving (women) and opportunity,” adding that at least two “women will be appointed for the first time in the committee to elect bishops in the Congregation for Bishops.”

Francis’ appointment of both women and laypersons to leadership roles within the Catholic Church follows from his apostolic constitution Praedicate evangelium, published March 19. The constitution reformed the Roman Curia to newly allow positions of governance to be assumed by laypeople, male or female, while removing the traditional hierarchy of the various departments, now all known as Dicasteries.

Pope Francis has a record of appointing women to notable roles within the Vatican, last year having raised Petrini to the high-ranking position of secretary-general of the Vatican City State. Last year also saw Francis appoint French Sister Nathalie Becquart to the position of under-secretary of the Synod of Bishops, an office previously only ever held by ordained men. The role gives her the right to vote at upcoming synods, the first time a woman has had the power to do so.

The new appointees are joined in the Vatican’s corridors of power by Dr. Raffaella Vincenti as office head, but not prefect, of the Vatican Apostolic Library and Prof. Antonella Sciarrone Alibrandi as a member of the Financial Information Authority board.

In addition to his opening of the Roman Curia to laymen and laywomen, the Pope released a motu proprio, Spiritus Domini, in January last year in which he changed canon law to permit the liturgical institution of female lectors and acolytes.