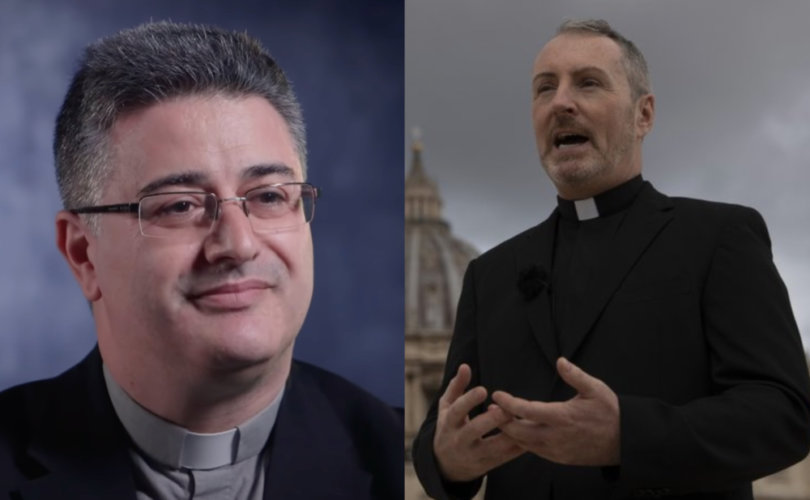 VATICAN CITY (LifeSiteNews) – The Vatican has announced Pope Francis’ appointments for the two secretaries of the newly divided and restructured Congregation for the Doctrine of the Faith (CDF), as well as confirming the leadership roles in the Dicastery for the Service of Integral Human Development.

In an announcement made April 23, the Holy See Press Office wrote that Italian Monsignor Armando Matteo, currently a deputy undersecretary in the CDF, would now lead the Doctrinal Section. Meanwhile the Irish priest, Monsignor John Joseph Kennedy will lead the Disciplinary Section, having served as head of office in this department since 2017.

The new appointments come on the back of February 2022 changes made to the CDF, when Pope Francis officially split the doctrinal and disciplinary elements of the CDF into two separate parts, by virtue of the motu proprio Fidem servare.

At the time MessainLatino, warned that the motu proprio was “dismantling” the CDF, and that the appointments “promise to be very negative.” The blog predicted that the Doctrinal Office’s Secretary would be Monsignor Armando Matteo.

The CDF – now known as a Dicastery, as explained below – is currently led by 78-year-old prefect, Cardinal Luis Ladaria Ferrer, with strong suggestions that the prominently pro-LGBT Archbishop Charles Scicluna of Malta could replace Ladaria as the CDF’s Prefect by the summer. Scicluna is already an adjunct secretary at the CDF.

51-year-old Msgr. Armando Matteo has been described as “highly esteemed by Pope Francis.” He previously taught Fundamental Theology at the Pontifical Urbanian University before entering the CDF in April 2021 to fill a role Pope Francis had newly created for him.

Under the terms of Fidem servare, his office will cover the “promotion and protection of the doctrine of faith and morals,” and will have care of “studies” aimed at increasing the “understanding and transmission of the faith at the service of evangelization,” particularly with regard to the “questions posed by the progress of the sciences and the development of society.”

As LifeSiteNews has reported previously, Matteo’s Doctrinal Section will also deal with examining Curial documents, as well as other writings that “appear problematic for the correct faith,” being told to “encourage dialogue” with the authors in order to propose “suitable remedies.”

The Doctrinal Section of the CDF is also directed to study “questions relating to the Personal Ordinariates instituted by the Apostolic Constitution Anglicanorum Coetibus,” namely, the Anglican Ordinariates. The office that examines marriages, and their potential dissolution, is now moved to the Doctrinal Section.

Should the Vatican rumors prove true and Archbishop Scicluna assume the role of Prefect this year, it would effect a fundamental shift in the CDF, with its new governance being strongly opposed to the stance taken by Ladaria on LGBT issues. It remains to be seen whether Msgr. Matteo would co-operate with Scicluna’s pro-LGBT stance, and approval of Holy Communion for divorced and civilly remarried Catholics.

53-year-old Msgr. John Kennedy has been an official in the CDF since 2003, and has led the CDF’s disciplinary office since 2017. As such, he has been in charge of dealing with reports of clerical sex abuse from across the world, and told the Associated Press in 2019 that the case load was four times as large as it had been in 2009.

“We’re effectively seeing a tsunami of cases at the moment, particularly from countries where we never heard from,” Kennedy said, of the numbers of sex abuse reports. He urged journalists to keep exposing sex abuse, saying the “topic of the clergy abuse crisis is front and center in our culture.”

Kennedy has also been praised by Pope Francis as “a very good person, very efficient, and swift.”

Speaking to Vatican journalist Diane Montagna in 2017, Kennedy praised the work of the CDF as having “its own importance because through it many can learn to know the beauty of truth and have their faith restored knowing that the Church is striving to confront various realities, in particular that of the abuse of minors, through the search for truth and the bringing about of justice.”

Kennedy will continue in a similar vein as Secretary, as the newly divided Disciplinary Section attends to “crimes reserved to the Congregation and dealt with by it through the jurisdiction of the Supreme Apostolic Tribunal established there,” including “grave” crimes such as sexual abuse.

Under his leadership, the Disciplinary Section is to promote “appropriate formation initiatives” to be offered to local bishops and canon law practitioners “in order to foster a correct understanding and application of the canonical norms relating to its own sphere of competence.”

Restructuring of CDF and then the Roman Curia

Francis’ February changes to the CDF came amid rumors that he is altering the Congregation to become more LGBT friendly, and the dissident National Catholic Reporter described the move as “the most significant organizational changes to the office in over 30 years.”

Since the CDF’s March 2021 note issuing a ban on blessings of homosexual relationships, and calling them “illicit,” Pope Francis has made numerous public statements praising and supporting both advocates of LGBT ideology and same-sex civil unions.

He recently fired the CDF’s Secretary, the second-in-command, Archbishop Giacomo Morandi, the driving force behind the CDF’s 2021 ban on homosexual blessings. Vatican observers believe Morandi’s firing to have been almost a punishment for this document, as well as being linked to Morandi’s opposition to Pope Francis’ restrictions on the Latin Mass contained in Traditionis custodes.

Then on March 19, Pope Francis made the surprise promulgation of his reform of the Roman Curia, 9 years in the making, with his apostolic constitution Praedicate evangelium. Effective June 5, 2022, the document restructured all the Congregations into newly named “Dicasteries.”

A new hierarchy appeared to emerge from the constitution’s text, placing the Secretariat of State highest, with the Dicastery for Evangelization next, and the Dicastery for the Doctrine of the Faith third. The CDF has previously been listed first among the Vatican Curia departments.

Notably, Praedicate evangelium also elevated the role of the laity in the governance of the Vatican Curia, and by extension, in the wider Church. The laity — male or female — must have “roles of government and responsibility,” ordered Pope Francis. Praedicate evangelium thus decrees that “any member of the faithful can preside over a Dicastery or an Organism, given the particular competence, power of governance and function of the latter.”

Dicastery for the Service of Integral Human Development

As part of the same bulletin, the Holy See announced the appointment of the Prefect, Secretary, and Under-Secretary of the Dicastery for the Service of Integral Human Development, although no great change is seen in the appointments.

Cardinal Michael Czerny, S.I., the current ad interim Prefect, has been made the official Prefect. Czerny served as the special secretary for the Amazon Synod, and has signaled his openness to female ordination.