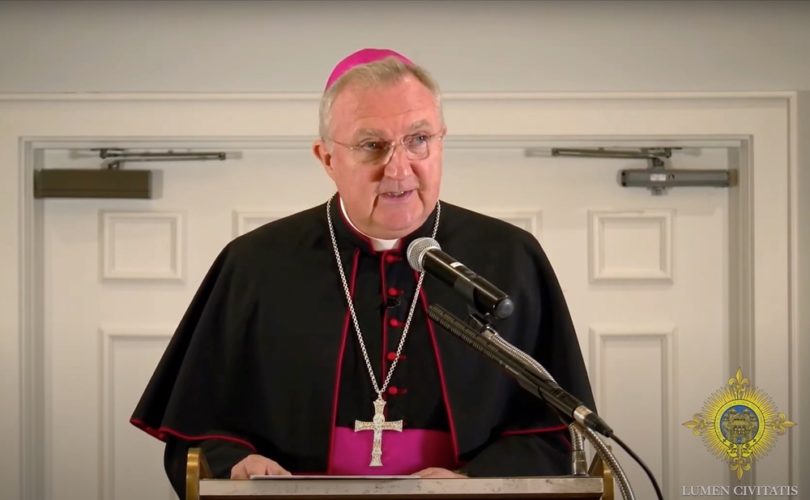 VATICAN CITY, May 27, 2021 (LifeSiteNews) – Pope Francis appointed Archbishop Arthur Roche as the new Prefect of the Congregation for Divine Worship and the Discipline of the Sacraments (CDW), replacing Cardinal Robert Sarah and potentially ushering in a new era of active opposition to the Extraordinary Form of the Mass.

The press release from the Holy See, issued May 27, announced the news of Roche’s appointment, alongside that of the new Secretary and under-Secretary of the Congregation.

Archbishop Roche, formerly bishop of Leeds, U.K., served as Secretary of the Congregation from 2012 through this year, having been appointed to it by Pope Emeritus Benedict XVI.

Roche previously served as bishop of Leeds from 2004 through 2012, and auxiliary bishop of the Archdiocese of Westminster from 2001 through 2002, under Cardinal Cormac Murphy O’Connor.

Commenting on the news, CNA Europe editor Luke Coppen wrote that Roche’s appointment demonstrated the level of influence that was enjoyed by Cardinal O’Connor, who was one of the group of clerics dubbed the “St. Gallen mafia,” a group that wished to radically change the Church and make it “much more modern.”

The appointment of Roche comes in light of fears that Pope Francis is about to restrict the celebration of the Extraordinary Form of the Roman Rite (also referred to as the Traditional Latin Mass, or the Tridentine Mass). Reports have emerged in recent days stating that Francis has spoken to the Italian Bishops Conference, telling them that he has finished the third draft of a document that will restrict the offering of the Extraordinary Form.

Vatican journalist Diane Montagna announced today that Messa in Latino, the original source of the news, had confirmed to her that the information was trustworthy and had come to them from three bishops and two high ranking members of the Roman Curia, who were all present at the event.

Indeed, Pope Francis recently initiated a peculiar investigation into the CDW. Archbishop Roche sought to downplay the news, but Rome sources confirmed to LifeSiteNews at the time that it was far from a regular event. Italian newspaper Il Messagero has called it a “decidedly unusual extraordinary act personally ordered by the Pope to ‘straighten out’ the Congregation of Divine Worship.”

Given that it came shortly after the announcement of new restrictions being placed on celebrating the traditional Mass in the Vatican, the news has led to speculation that it is part of an effort by Francis to remove from the Congregation those members who are more sympathetic the traditional Latin liturgy and its theology.

Roche’s history on the Latin Mass and Vatican II

Various commentators have noted that Archbishop Roche has taken action several times to limit the celebration of the traditional Catholic liturgy.

Following Pope Benedict XVI’s Summorum Pontificum, which gave priests permission to offer the traditional Mass without seeking permission from their bishop, Roche swiftly declared that the power of the bishops to prevent the Latin Mass was still in effect, and issued guidelines on the matter.

In 2020, he penned a letter to the bishops of the world attacking the traditional Mass and praising the Second Vatican Council’s paradigm shift in its view of the Church, hailing the fact that the Council had removed the notion of the Church as a “perfect society and a world power to be contended with,” and instead was viewed as “constantly open to reform and conversion.”

The 71-year-old prelate styled the new rite of the Mass, the Novus Ordo, as the “good fruit from the tree of the Church.” He called it an “ecclesiastical duty” to implement the Novus Ordo, criticizing how the Extraordinary Form did not promote the community celebration by the laity, and how the Extraordinary Form had “the priest alone as celebrant.”

He also strongly advocated the community celebration over the priestly celebration, condemning the so-called “passive” role played by the congregation at the Traditional Latin Mass.

The Novus Ordo was a result of the “dawning consciousness” that moved away from the “solely clerical version of the liturgy,” wrote Roche.

However, traditional theologians have warned of the dangers of such language around community celebration, warning of a blurring of the lines between priest and people. In his work on the liturgy, The Destruction of the Roman Rite, Don Leone warns that with this teaching, “the congregation no longer unites itself spiritually with the unfathomable mysteries of the Mass, but usurps the functions of the clergy.”

Indeed, in his encyclical Mediator Dei, Pope Pius XII warned of the dangers of Roche’s view, describing as erroneous the position that “they look on the eucharistic sacrifice as a ‘concelebration’ in the literal meaning of that term and consider it more fitting that priests should ‘concelebrate’ with the people present than that they should offer the sacrifice privately when the people are absent.”

The “good fruit,” which Roche proclaims, has previously been described by liturgy expert Dr. Peter Kwasniewski as responsible for diminishing belief in the Real Presence. Kwasniewski stated that the “liturgical reform cruelly diminished” the liturgical gestures of love and reverence for the Blessed Sacrament, “and introduced other practices, now habitual to the point of being immovable, that suggest we are dealing with common food and drink.”

Commenting on Roche’s 2020 letter, Una Voce Scotland described it as “a feeble attack on the Extraordinary Form of the Mass.”

Aside from promoting the new style of liturgy, Archbishop Roche has also declared that Vatican II, described as “pastoral” in the opening address of John XXIII, was in fact of far greater weight, perhaps even than any council before.

“The Second Vatican Council for the first time ever solemnly proclaimed a body of doctrine on the Church which is now part of the Church’s Magisterium,” Roche wrote in February 2020.

While acting as Secretary for the CDW, Roche gave his name to a controversial letter sent from the CDW, which supported a U.S. bishop in his decision to ban the faithful from receiving Holy Communion on the tongue during the COVID-19 disruption.

“As has already been enunciated in the circular letter of Card. Robert Sarah of August 15, 2020, and approved for publication by His Holiness Pope Francis, ‘in times of difficulty (e.g., wars, pandemics), Bishops and Episcopal Conferences can give provisional norms which must be obeyed’, even clearly, as in this case, to suspend for whatever time might be required, reception of Holy Communion on the tongue at the public celebration of the Holy Mass,” the letter states.

While missing the all-important signature of Cardinal Sarah, the letter bore the signature of Archbishop Roche instead.

As reported by LifeSiteNews at the time, Roche’s letter contradicted a 2009 letter from the same Congregation regarding the same question in the midst of the H1N1 influenza pandemic. At that time, the Vatican under Pope Benedict, wrote that Church law on the subject stipulates, “each of the faithful always has the right to receive Holy Communion on the tongue” and that it may not be abrogated.

Furthermore, Roche was acting in violation of the 2004 instruction Redemptionis Sacramentum, which holds that “each of the faithful always has the right to receive Holy Communion on the tongue.”

Speaking to LifeSiteNews at the time, Kwasniewski mentioned that Roche’s letter “undermines the universal norms and tradition of the Church, reiterated many times, concerning the most appropriate and reverent manner for receiving the Holy Eucharist.”

A new era of anti-traditionalism in the Vatican

With the appointment of Archbishop Roche to head the CDW, the Vatican appears set to begin a renewed campaign against the traditional movement in the Church.

The upcoming Vatican conference, entitled “For a fundamental theology of the priesthood,” due to take place in early 2022, is also set to discuss one of Roche’s key interests – the relationship between the ordained priesthood and the priesthood of the faithful. It is expected by many that the conference may well further undermine traditional teaching regarding the sacrament of holy orders, clerical celibacy, and female deacons.

The conference will take place with the Church is in the midst of Pope Francis’s newly announced Church-wide two-year synod on synodality, following the German example of the synodal church, which has been described by concerned traditional Catholics as “Vatican III.”

Noting his concerns to LifeSiteNews, Kwasniewski called the upcoming “Vatican III” a “continual submersion in bureaucracy, a surrender to the modern mentality of administration as the cure for all evils, which keeps the Church busy gazing at its navel while real evangelization withers and the pews empty out.”

Speaking to LifeSiteNews, Deacon Donnelly, a U.K. author and catechist, commented on the danger that Roche’s position posed for the celebration of the traditional liturgy by many clergy.

“Archbishop Arthur Roche’s appointment as the Church’s top liturgist is bad news for those who love the Latin Mass. His recent essay defending the Roman Missal of Pope Paul VI, sent to all the world’s bishops, is a negative caricature of the Latin Mass,” Donnelly told LifeSiteNews.

“He repeats propaganda that the laity had been reduced to a state of unengaged passivity,” continued Donnelly.

“If only he’d read ‘The Small Person’s Mass Book’ written by Cecily Hallack in 1932. It reveals the depth of ‘active, conscious, pious participation’ expected even of pre-First Holy Communion children in the Mass, let alone the richness of the conscious engagement expected from the adults. Cardinal Sarah appreciated this truth, clearly Archbishop Roche doesn’t.”