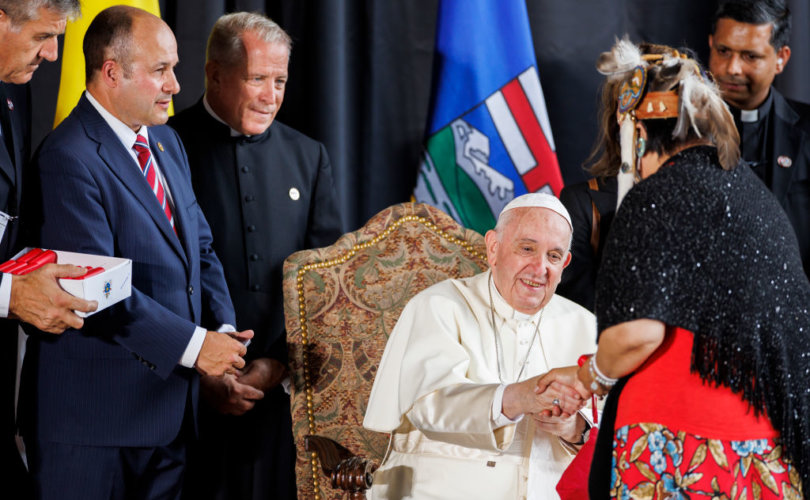 Pope Francis greets indigenous dignitaries as he arrives in Canada, on July 24, 2022 in Edmonton, CanadaPhoto by Cole Burston/Getty Images

After touching down at Edmonton International Airport at around 11:09 a.m. local time, the Pope was greeted by numerous Church, state, and indigenous dignitaries, including George Arcand Jr. – the Grand Chief of the Confederacy of Treaty Six First Nations – Prime Minister Justin Trudeau, Governor General Mary Simon, and Lieutenant Governor Salma Lakhani of Alberta.

Welcoming the Pope to Canada, a drum ensemble from Alexis Nakota Sioux Nation performed “a traditional welcome song in an autochthonous language,” according to the Holy See Press Office, while Arcand Jr. gifted the Pontiff a beaded medallion, CTV News reported.

Francis will make stops in Edmonton, Quebec, and Iqaluit over the course of his visit.

Faithful Catholics have been given cause for concern regarding the Pope’s intention to participate in a native “smudging” ritual during his visit, which will see the earthly head of the Catholic Church perform a “ritual of purification” in which “mother earth” is prayed to as a kind of pantheistic deity.

As noted by LifeSiteNews reporter Louis Knuffke, the ritual, which apes the use of Catholic sacraments and sacramentals, “is a clear act of pagan superstition,” reminiscent of the Holy Father’s veneration of the pagan pachamama idol at the Vatican in 2019.

Francis has also been criticized for the close ideals he shares with Prime Minister Trudeau on matters relating to the climate, the “Great Reset” economic agenda, COVID-19 and the related abortion-tainted “vaccines,” and relations with China.

Ahead of his arrival in Canada, the Pope announced on Twitter his hope that the trip “might contribute to the journey of reconciliation,” in reference to the allegations of abuse against indigenous children as well as the apparent discovery of unmarked graves at once Catholic Church-run residential schools.

Dear brothers and sisters of #Canada, I come among you to meet the indigenous peoples. I hope, with God’s grace, that my penitential pilgrimage might contribute to the journey of reconciliation already undertaken. Please accompany me with #prayer.

Francis again confirmed his conviction that the visit “is a penitential journey” in comments to reporters aboard the papal flight into Canada on Sunday morning.

— Article continues below Petition —
CANCELED: Stand with Fr. JesusMary after he was BARRED from Priestly Ministry for Criticizing Pope Francis!
Show Petition Text
9804 have signed the petition.
Let's get to 10000!
Thank you for signing this petition!
Add your signature:
Show Petition Text

The Pope is expected to deliver an apology relating to the Catholic Church’s supposed involvement in the abuses at Canadian residential schools, echoing his plea for forgiveness from the indigenous community during his meetings with representatives in April at the Vatican.

“Right now, many of our people are skeptical and they are hurt,” Arcand Jr. told the Associated Press, adding that a papal apology “could begin our journey of healing … and change the way things have been for our people for many, many years.”

However, since the reported discovery of graves at the Kamloops Residential School, evidence has continued to emerge which undermines the mainstream narrative of a Church which secretly buried children. Kamloops itself was financed by the state, and historic reports noted how the Canadian government ignored reports from 1907 that the schools were in “prime conditions” for the “outbreak of epidemics.”

More recent investigations from January 2022, found that despite the allegations of “physical genocide” on the part of the Church, no graves have actually been found.

Despite the lack of evidence over the existence of the “mass grave,” Canadian Catholic prelates swiftly complied with mainstream media pressure to issue public statements of apology.

Indigenous leaders are expected to demand financial reparations over the alleged abuses as well as the return of artifacts housed in the Vatican Museums once gifted by the indigenous peoples.