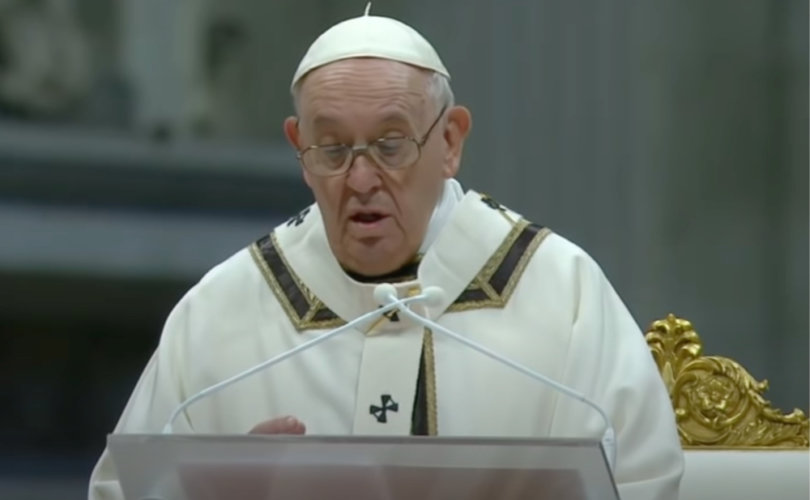 VATICAN CITY (LifeSiteNews) — In his homily for the feast of the Epiphany on Thursday, Pope Francis once more attacked Catholics attached to the tradition of the Church. He also seemed to contradict the words of St. Paul when describing the Catholic faith.

Delivering his homily for the Epiphany in St. Peter’s Basilica, Pope Francis used the journey of the three Magi as a basis for promoting his personal concept of Catholicism, and for issuing one of his trademark criticisms of traditional Catholics.

The pontiff directly rejected St. Paul’s language of the “shield of faith,” urging Catholics instead to view faith as “a constant and restless movement.”

‘Desire’ must carry Church ‘forward’ away from ‘formal religiosity’

Speaking of the Magi’s “desire” which fueled their journey, Pope Francis attacked Catholics who did not have a desire which “carries us forward.”

“The journey of life and faith demands a deep desire and inner zeal,” he said. “Sometimes we live in a spirit of a ‘parking lot’; we stay parked, without the impulse of desire that carries us forward.”

“We do well to ask: Where are we on our journey of faith? Have we been stuck all too long, nestled inside a conventional, external and formal religiosity that no longer warms our hearts and changes our lives?”

In comments seeming to allude to the Traditional Latin Mass, Pope Francis attacked the liturgical devotees of a “dead language.” “Do our words and our liturgies ignite in people’s hearts a desire to move towards God, or are they a ‘dead language’ that speaks only of itself and to itself?” he asked.

Instead of such “dead” liturgy, Pope Francis pushed for a style of Catholicism filled with “unsettling joy of the Gospel” and moments of being “startled by Jesus.”

“It is sad when a community of believers loses its desire and is content with ‘maintenance’ rather than allowing itself to be startled by Jesus and by the explosive and unsettling joy of the Gospel,” continued the Pope. “It is sad when a priest has closed the door of desire, sad to fall into clerical functionalism, very sad.”

Presenting a method to follow the Magi’s “school of desire,” Pope Francis appeared to contradict the words of St. Paul in his letter to the Ephesians when referencing faith.

“The Magi teach us that we need to set out anew each day, in life as in faith, for faith is not a suit of armour that encases us; instead, it is a fascinating journey, a constant and restless movement, ever in search of God, always discerning our way forward,” declared the Pontiff.

However, in stark contrast, St. Paul describes faith as the “armor of God,” and calls on Catholics to take up the “shield of faith,” in order to “extinguish all the fiery darts of the most wicked one.”

Therefore take unto you the armour of God, that you may be able to resist in the evil day, and to stand in all things perfect. Stand therefore, having your loins girt about with truth, and having on the breastplate of justice, and your feet shod with the preparation of the gospel of peace. In all things taking the shield of faith, wherewith you may be able to extinguish all the fiery darts of the most wicked one. And take unto you the helmet of salvation, and the sword of the Spirit (which is the word of God).

While the Pope called for Catholics to engage in “a constant and restless movement,” St. Paul urged the members of the Church to “stand against the deceits of the devil” using the imagery of faith as both armor and weaponry.

Francis continued by urging Catholics to imitate the Magi through questioning, doubling down on his concept of a faith which unsettles.

“Yet let us also be unsettled by the questions of our children, and by the doubts, hopes and desires of the men and women of our time,” he said. “We need to entertain questions.”

“God addresses us more with questions than with answers,” added Pope Francis.

Such a faith which undermines or unsettles would allow Catholics to “take new paths,” added Francis, highlighting how his current multi-year Synod on Synodality promoted such “new paths.”

“The Magi return ‘by another way’. They challenge us to take new paths,” he said.

Here we see the creativity of the Spirit who always brings out new things. That is also one of the tasks of the Synod we are currently undertaking: to journey together and to listen to one another, so that the Spirit can suggest to us new ways and paths to bring the Gospel to the hearts of those who are distant, indifferent or without hope, yet continue to seek what the Magi found: “a great joy” (Mt 2:10). We must always move forwards.

The Synod calls on bishops to listen to lapsed Catholics and non-Catholics as part of the “renewal of the Church proposed by the Second Vatican Council.”

Pope Francis reinforced his message of seeking “new paths” in a subsequent message posted to his official Twitter account, quoting from his homily.

The Magi return “by another way” (Mt 2:12). They challenge us to take new paths. This is the creativity of the Holy Spirit who always does new things. #Epiphany

Media attention on the Pontiff’s homily, which also promoted Eucharistic adoration, was focussed on the latest papal attack on traditional Catholics, after a year marked by severe restrictions on the traditional liturgy, in the Pope’s July motu proprio Traditionis custodes and the Vatican’s December Responsa ad dubia.

Reuters reported that the Pope’s homily contained “specific criticism at those who have balked at his decision to restrict the traditionalist Latin Mass,” marking another chapter in the “Church’s ‘liturgy wars’.”

U.K. blogger Mark Lambert blasted the Pope, writing “Does he really think he will convince anyone with this constant self justification?”

Does he really think he will convince anyone with this constant self justification? https://t.co/715UeahfKO