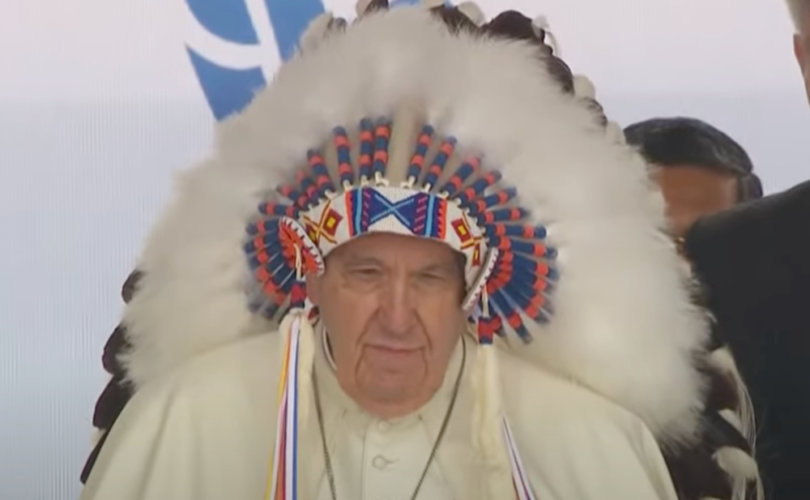 Pope Francis in headgear given to him by representatives of the Canadian Indigenous peoples, July 25, 2022.Vatican News screenshot

MASKWACIS, Alberta (LifeSiteNews) – During the first full day of his visit with Canada’s Indigenous communities, Pope Francis attended a “healing dance” that appeared to direct worship to “Mother Earth.”

Prior the ritual, which took place in Maskwacis, Alberta this morning, the Master of Ceremonies for the event explained that a “healing dance” was about to occur, while outlining that the drum involved is “the heartbeat of Mother Earth, the drum is life.”

Gathered in a circle around a large tree branch, Indigenous people began chanting and playing the drum as people dressed in feathers and other traditional outfits started dancing.

Francis, along with four Indigenous Chiefs donning traditional headdresses and garb, sat on a stage slightly above the dance, giving them a view of the happenings. (Footage of the dance can be found in the Vatican’s livestream of the event, starting at 1:09:00)

The MC for the event spoke about the importance of the number “four” as the ritual continued, referencing the “elements,” the “four directions,” the “four stages of life” and the “four living life forms.”

“We have a sun rising from the east, and we also have, from the south, we have the Thunderbird,” explained the MC.

“Mother Earth, is of course, the Mother of all humanity,” added the ceremonial leader, as the dancing continued with Francis and the Chiefs looking onward at the ritual.

“We are the people of Mother Earth, hi, hi,” concluded the MC.

As extensively reported by LifeSiteNews, this is not the first time Francis has attended or participated in what seems to be pagan-styled worship.

In 2019, Francis allowed the placement of an idol representing the pagan deity of Pachamama (Mother Earth) in the Vatican, drawing widespread outrage by faithful Catholics around the world.

— Article continues below Petition —
Parents' Pledge: We will pull our children out of explicit sex-ed classes
Show Petition Text
4009 have signed the petition.
Let's get to 5000!
Thank you for signing this petition!
Add your signature:
Show Petition Text

The Church has always forbidden the faithful from participating in or supporting non-Catholic worship under the pain of grave sin.

As explained by LifeSiteNews’ Louis Knuffe, the use of terms like “mother earth” and the invocation of such a name for spiritual purposes is not merely a “cultural ritual” but a religious one, and is tantamount to the sin of “superstition” and constitutes a “grave sacrilege.”

“The essential difference between what the Church does in her sacred rites, sacraments, and sacramentals, and the superstitious ceremonies and rituals of pagan religions, is that the Church has a supernatural principle by which grace is communicated when She uses bodily things or performs physical actions, like pouring water over the catechumen’s head in baptism,” explained Knuffe in a piece about Francis’ visit to Canada and his participation in Indigenous rituals.

“That supernatural principle is the spiritual authority that flows from the Person of Christ and the power of His saving death. It is Christ who gives the sacraments the power to communicate grace through bodily actions and things.”