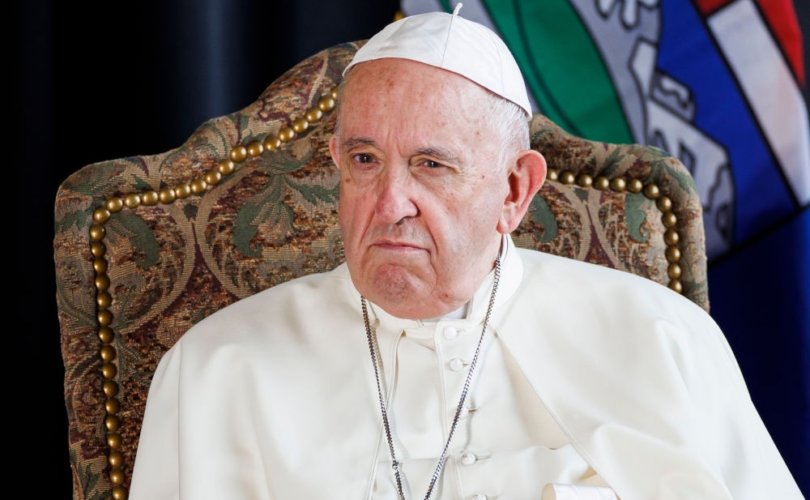 VATICAN CITY (LifeSiteNews) — Pope Francis reportedly authorized secret wire-taps as part of an ongoing Vatican investigation into an Italian financial broker accused of defrauding the Vatican in a real estate venture that turned into a massive corruption scandal.

According to leaked documents reportedly viewed by The Sunday Times, Pope Francis gave his permission for investigators with the Vatican’s Office of the Promoter of Justice to wire-tap phones, intercept emails, and even make arrests without the approval of judges as part of their investigation.

The Times reported that, according to prosecutors, Mincione had “defrauded the Vatican over the purchase of 60 Sloane Avenue, a former Harrods storage building in Chelsea that was earmarked for development into luxury apartments.”

The New York Post pointed out that in April 2021 Pope Francis amended Vatican law to facilitate prosecutions for cardinals and bishops. Days later, the Pontiff reportedly ordered “the adoption of technological tools suitable for intercepting fixed and mobile devices, as well as any other communication, including electronic ones,” according to the leaked documents.

“These powers may be exercised against subjects whose communication activities are considered useful for carrying out the investigations,” the documents state, according to The Times.

Shortly thereafter, Vatican officials and Italian police officers reportedly seized Mincione’s phones and computer while the businessman was on vacation.

According to the Post, Mincione’s attorneys reached out to British officials to request that they not facilitate the Vatican’s investigation.

Mincione has denied the allegations against him.

Mincione is not alone in facing scrutiny over the real estate deal, which became public in 2014 after Pope Francis appointed Cardinal George Pell as the Vatican’s new Secretariat for the Economy to clean up the Vatican’s scandal-ridden finances, LifeSiteNews previously reported.

Cardinal Giovanni Angelo Becciu, a former Substitute for General Affairs in the Vatican Secretariat of State, is among 10 people who face charges, including corruption, forgery, fraud, and money laundering in connection with the scandal.

Becciu, who resigned from his role in 2020 amid the ongoing investigation, stood trial last year for allegedly using Church money — reportedly including charitable donations from the faithful pulled from the Pope’s “Peter’s Pence” fund — to make his investment.

In 2019, London’s Financial Times reported that the Vatican’s investigation centered on Becciu’s dodgy investments, and noted that Vatican police carried out a raid on the Vatican’s Secretariat of State. Five Vatican employees were suspended after the raid, LifeSiteNews reported.

Becciu has denied the allegations against him.

In 2020, Pope Francis finally stripped the Secretariat of State of control over its own accounts. The same year, the pope ordered Cardinal Becciu’s resignation.

Then in 2021, prosecutor Corrado Cappiello suggested that the Secretariat of State had itself violated Vatican regulations in the scandalous financial schemes centering on the London property.

“From the investigations carried out by the IOR [Institute for the Works of Religion, i.e., the Vatican Bank] and the office of the Auditor [of the Holy See], it emerged that the acquisitions of properties for investment purposes cannot be carried out by the Secretariat of State, being reserved for the Administration of the Patrimony of the Apostolic See,” Cappiello said.

As the corruption trial continues, the Vatican last week released a new financial policy that requires investments must align with the Church’s social and moral doctrine, LifeSiteNews reported.

The Vatican recently sold the London building involved in the ongoing investigation, with a reported loss of $200 million.