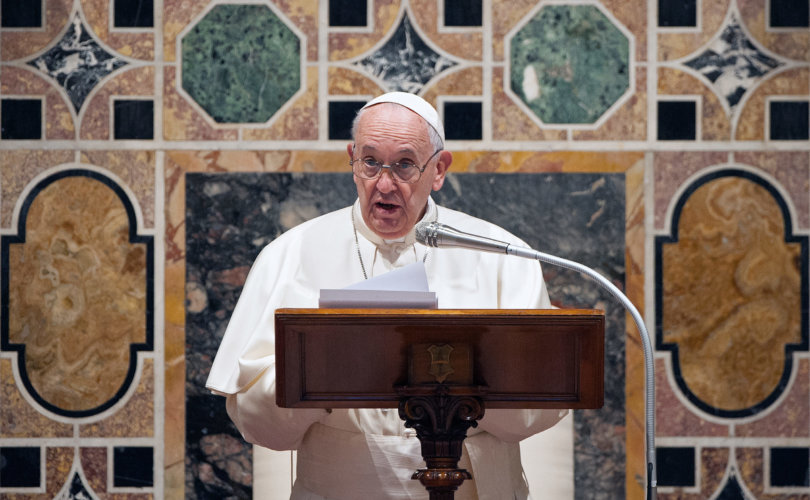 VATICAN CITY, June 25, 2020 (LifeSiteNews) — Pope Francis has indicated that he was not impressed with priests who violated coronavirus lockdown rules to minister to the laity.

In a speech he delivered Saturday to primarily bishops, doctors, nurses, and other healthcare workers from the Italian region of Lombardy, Pope Francis contrasted priests who violated the ban on public worship with priests who ministered to their flock in “creative” ways, like buying their shopping.

“The pastoral zeal and creative solicitude of priests helped people to follow the way of faith and not to remain alone before sorrow and fear,” he said.

“This priestly creativity … overcame … a few, ‘adolescent’ expressions against the measures of the authority having the duty of protecting the health of the people.”

Francis said most priests were “obedient and creative.”

“I admired the apostolic spirit of many priests who visited by telephone, knocked on doors, called by homes (saying): ‘Do you need something? I will do your shopping,’” he added.

“A  thousand things. Closeness, creativity, without shame. … They were a sign of the consoling presence of God.”

He said these priests were “fathers, not adolescents.”

The pontiff said Italian Catholics were able to feel like a community even without public worship.

“These past months, the people could not participate personally at the liturgical celebrations, but they didn’t miss the feeling of community,” he said.

“They prayed alone or with their families, even through means of social communication, spiritually united, and perceiving that the embrace of the Lord goes beyond the limits of space.”

Pope Francis praised doctors and nurses and other people in secular life who brought healing and comfort to the sick during the bleakest days of Italy’s early experience of the coronavirus pandemic. He asked his audience not to forget the “positive energy” generated at that time and said individualism as a guiding principle for society has been, more now than ever, shown to be illusory.

“God has created us for communion, for fraternity,” he said.

Among those present at the lecture were the Archbishop of Milan and the bishops of Bergamo, Brescia, Cremona, Crema, Lodì and Padua.

The coronavirus pandemic hit Lombardy early and hard before spreading throughout the rest of Italy, Europe and the United Kingdom. The first known Italian COVID-19 patient in the region fell ill in mid-February. On March 8, as the virus spread rapidly through northern Italy, Lombardy was placed with other northern and central areas under quarantine. This was only partially effective. As of today, there have been more than 93,000 cases reported for the Lombardy region, and the deaths of more than 16,500 residents have been blamed on the virus.

The quarantine, which included a ban on public worship and most travel outside the home, extended to the entire country on March 10. This left many priests uncertain as to how to minister to the spiritual needs of their people. In some places, authorities turned a blind eye to cautious Eucharistic and other devotional processions; in others, police fined priests for appearing outdoors without sufficient cause or even interrupted Mass.

One aspect of the coronavirus measures that troubled faithful Catholics in northern Italy was that churches were singled out for closure weeks before restaurants, swimming pools and other public venues were made to close their doors. On March 8, shortly after the nationwide ban on public gatherings, even private prayer in the churches of Rome was suspended. This decision was overturned on March 13 after Papal Almoner Cardinal Konrad Krajewski refused to close the doors to his titular church and displayed the Blessed Sacrament for adoration.

“It is the act of disobedience, yes, I myself put the Blessed Sacrament out and opened my church,” Krajewski said.

“This is an act that should bring courage to other priests.”