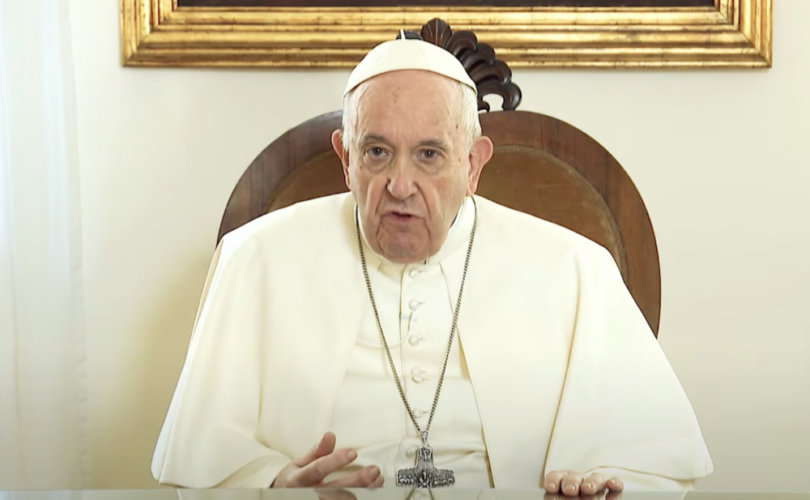 VATICAN CITY (LifeSiteNews) — Pope Francis has noted the “incoherence” of President Joe Biden’s support for abortion as a Catholic, but said that he “leaves it” to Biden’s “conscience” whether to receive Holy Communion or not.

Speaking to the Spanish TV network Univision in an interview segment released July 12, the 85-year-old pope condemned abortion, saying that “scientific data” show that “a month after conception, the DNA of the fetus is already present and the organs are already aligned.”

“Is it fair to eliminate a human life?,” he asked.

As for the position of self-described “Catholic” U.S. President Joe Biden and his prominent promotion of abortion, Pope Francis did not take an authoritative stance.

He stated that he “leaves it” to Biden’s “conscience,” saying “let him talk to his pastor about this incoherence.”

In an interview with Spanish-language TV network Univision, Pope Francis was asked about Pres. Biden’s support for abortion despite being Catholic. “I leave it to his conscience and that he speaks to his bishop, his pastor, his parish priest about that inconsistency.” pic.twitter.com/gV18xZv8lK

Controversy has clouded the Vatican in recent months regarding this issue.

Catholic U.S. House Speaker Nancy Pelosi regularly receives the Eucharist but was recently barred from Holy Communion by her local bishop, Archbishop Salvatore Cordileone of San Francisco. Despite this, Pelosi continued to receive Holy Communion at public Masses since Cordileone’s declaration, including notably at a Papal Mass on June 29.

When asked about this particular instance, by which he defied Cordileone, the Pontiff repeated one of his now familiar phrases, saying “when a pastor loses the pastoral dimension, he creates a political problem.”

Only last week, Pope Francis had weighed in on the recent overturning of Roe v. Wade and the prominent issue of pro-abortion politicians presenting themselves for Communion. Echoing his 2021 comments, Francis spoke to Reuters in an almost identical manner: “When the Church loses its pastoral nature, when a bishop loses his pastoral nature, it causes a political problem. That’s all I can say.”

However, Canon 915 of the Church’s Code of Canon Law instructs: “Those who have been excommunicated or interdicted after the imposition or declaration of the penalty and others obstinately persevering in manifest grave sin are not to be admitted to holy communion.”

Joe Biden himself told reporters last year in Rome that in a private meeting Pope Francis told him to “keep receiving Communion,” despite the politician’s continued, staunchly pro-abortion stance and support for LGBT ideology.

Biden told reporters that the subject of abortion did not come up during the meeting.

President Biden on whether the issue of abortion came up during his meeting with Pope Francis: “No, it didn’t … We just talked about the fact he was happy I was a good Catholic and I should keep receiving communion.”https://t.co/opHdwuWcbj pic.twitter.com/8XWTGXv3ah

Pope Francis has noted his opposition to abortion of late, telling Reuters that the procedure was like “hiring a hitman” in remarks reminiscent of his 2018 condemnation of abortion. However, his record on welcoming pro-abortion personalities to the Vatican undermines this argument. Only a few days ago, the Vatican announced that it would join the pro-abortion Paris Climate Agreement, an agreement of which Francis has long been a supporter.

In addition to his comments on Holy Communion, Pope Francis touched on a wide range of topics, giving an outline of what his life would look like should he retire.

However, he first ruled out the possibility of an imminent announcement regarding his retirement: “I have no intention of resigning. For the moment, no.”

However, in his most revealing comments to date, Francis outlined that a resignation was possibly on the cards at some point, saying that if he became aware of a need, or was advised, to resign, he would do so.

Yet he cast doubts on his longevity, saying that only “if I survive after resignation, it’s possible I might die before.” Should he retire, Francis declared that he wished to be known as “emeritus bishop of Rome,” not as emeritus pope, as Benedict XVI is styled.

In this instance, Francis expressed a wish to live in a Roman church where he would hear confessions.

Francis also praised Benedict XVI’s handling of his resignation but highlighted a desire for things to be done differently in the future, saying “things should be delineated more, or things should be made more explicit.”