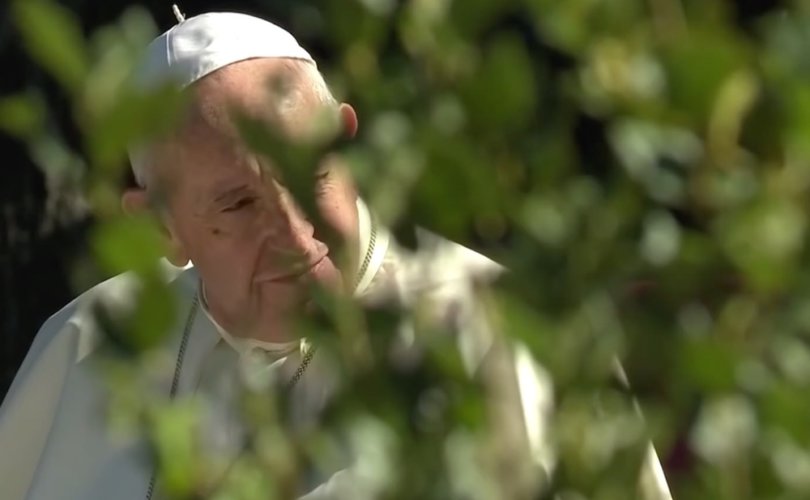 March 24, 2020 (LifeSiteNews) – Pope Francis told a Spanish journalist on Sunday that he believes that the coronavirus pandemic is nature “having a fit” in response to environmental pollution.

Stating that “curiously the planet hasn’t been very clean for a long time,” the interviewer asked, “Is it possible that this is nature’s hour of reckoning with us?”

“Fires, earthquakes . . . that is, nature is having a fit, so that we will take care of nature.”

The expression “having a fit” is a translation of the Spanish word used by Francis, “patalear,” which means to kick or stomp one’s feet, and is often used to refer to outbursts of rage or frustration, sometimes by children having a tantrum.

Pope Francis’ comments were made during an internet video interview with the Spanish journalist and comedian Jordi Évole on the coronavirus pandemic, in which Pope Francis made scant references to God, except to admit that he has sometimes doubted the existence of God in the past. (However, the video is edited, and parts may have been removed.)

“Pardon the question, but in a situation like this one, is it possible to have a crisis of faith?” asked Évole. “Can even a pope doubt the existence of God?”

“Clearly so,” responded Francis. “No one is exempt from existential temptations.”

“You have doubted the existence of God?” asked Évole.

“During my life, yes,” responded Francis. “At this moment no, but during my life, yes, a few times.  I recall that in my life I have had my doubts regarding the faith, my crises of faith, but they have been resolved by the grace of God.”

However, Francis added cryptically: “No one is saved from the common path of the people, which is the best road, the most sure, concrete. And that makes everyone well.”

Francis declined the offer to make a statement to those who are suffering the loss of loved ones, instead saying he wants them to feel his “closeness.”

“These days there have been many people that are suffering, especially the people who are losing their loved ones. What would you tell them?” he was asked.

“The last thing I would do is tell them something,” the pontiff responded. “What I try to do is help them to feel my closeness. Today what is more important is the language of gestures than words. It’s necessary to tell them something, but closeness, gestures, saying hello . . .” His voice trailed off, and Évole continued with another question.

Asked if he was an “optimist” regarding the situation, Francis answered that he had “hope” in people.

The full interview can be found behind a paywall here.

The pope’s attribution of the coronavirus pandemic to environmental damage is in keeping with the strongly environmentalist “eco-theology” he has been promoting during his pontificate since the publication of his encyclical “Laudato si” in 2015, and particularly at the recent Synod of Bishops for the Pan-Amazon Region, which tended to displace spiritual concerns with environmental ones.

The Pope has called on Catholics to have an “ecological conversion,” urging them, at one point, to go to confession for sins of not being respectful of creation, giving examples of examination of conscience such as “avoiding the use of plastic and paper,” “separating refuse” and “turning off unnecessary lights.”

Last October, the Pope published a book titled “Our Mother Earth” which consisted of a collection of his addresses, messages, and homilies where he stresses the protection of the environment. “I sincerely hope for growth in awareness and true repentance on the part of us all, men and women of the 21st century, believers or not, and on the part of our societies, for allowing ourselves to be carried away by logics that divide, create hunger, isolate and condemn. It would be good to ask the poor [and] the excluded for forgiveness. Then we could repent sincerely, including for the harm done to the earth, the sea, the air, the animals,” the Pope stated in an extract of one of his messaged included in the book.

The Pope’s opinion of the origin of natural disasters as nature lashing out against man’s environmental sins is echoed by Leonardo Boff, a dissenting “liberation” theologian who abandoned the Franciscan order and entered into a union with a woman after being censured by the Vatican for attacks on Catholic doctrine. Boff is a strong supporter of Pope Francis and has known him since the 1970s.

In a recent article for a Brazilian magazine, Boff opined that the coronavirus pandemic is the revenge of “Gaia,” a personified planet earth who has become outraged over environmental offenses, and which he also calls the “Great Mother.”

“Not without reason did James Lovelock, who formulated the theory of the Earth as a living, self-regulating superorganism, Gaia, write a book (called) Gaia's Revenge (Intrínseca, 2006),” wrote Boff in his article “The Origins of Coronavirus”.

“I believe that current diseases such as dengue, chikungunya, zika virus, SARS, ebola, measles, the current coronavirus, and the widespread degradation of human relations, marked by deep inequality/social injustice and a lack of minimal solidarity, are a reprisal for Gaia for the offenses we inflict on her without interruption,” he added.

“It is not without reason that the virus has erupted there where there is most pollution,” wrote Boff,  adding: “I would not say, like J. Lovelock, that it is ‘Gaia's revenge’ because she, as the Great Mother, does not take revenge, but gives us severe signs that she is ill (typhoons, melting of the polar ice caps, droughts and floods, etc.) and, finally, because we do not learn the lesson, she makes a reprisal against us like the diseases mentioned,” he wrote, adding “It is a reaction to violent human action.”