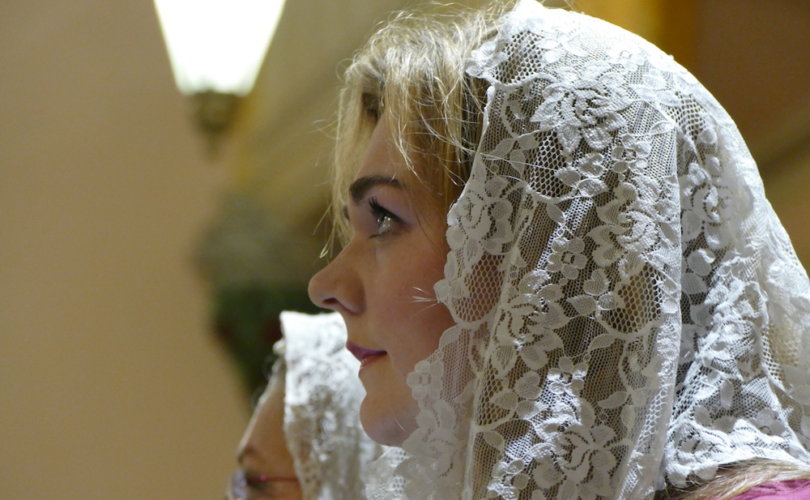 November 11, 2016 (LifeSiteNews) – In a new interview, Pope Francis criticized the “rigidity” of young people who are attached to the Traditional Latin Mass.

“I always try to understand what's behind people who are too young to have experienced the pre-conciliar liturgy and yet still they want it,” the pontiff said. “Sometimes I found myself confronted with a very strict person, with an attitude of rigidity. And I ask myself: Why so much rigidity? Dig, dig, this rigidity always hides something, insecurity or even something else. Rigidity is defensive. True love is not rigid.”

Pope Francis frequently criticizes faithful Catholics using this type of rhetoric. He has blasted the “excessive rigidity” of Catholics who believe in moral absolutes.

“Traditionalists” with their “hostile inflexibility,” fail to allow themselves to be “surprised by God,” he said in 2014.

In the same interview, Pope Francis said Vatican II's major liturgical changes “should carry on as they are.”

“To speak of the 'reform of the reform' is a mistake,” he said.

The “reform of the reform” is an expression inspired by Pope Benedict XVI to refer to a reform of the post-Vatican II liturgy that would make it more closely aligned with Catholic liturgical tradition.

Following the Second Vatican Council, it was widely and errantly believed that the Old Rite of the Mass had been abolished or forbidden. In his motu proprio Summorum Pontificum, Pope Emeritus Benedict XVI clarified that both the Ordinary Form (post-Vatican II Mass) and Extraordinary Form (Mass according to the 1962 missal) of the liturgy are permitted and “there is no contradiction between the two editions of the Roman Missal.”

“In the history of the liturgy there is growth and progress, but no rupture,” Pope Benedict wrote. “What earlier generations held as sacred, remains sacred and great for us too, and it cannot be all of a sudden entirely forbidden or even considered harmful.”

In the new interview, however, Francis describes Benedict's actions as an “exception” that was “magnanimous.”

Pope Benedict extended a “fair and magnanimous gesture to meet a certain mentality of some groups and people who had nostalgia. … But it is an exception,” Pope Francis said.

In an essay on why she likes the Traditional Latin Mass, teenaged Anya Proctor wrote that she was driven to it by “weird” homilies about “other religions, the gospel of Judas, funny stories in the newspaper, irrelevant anecdotes, and even blatant heresies” and “a priest using props on the altar to demonstrate his homily—as if we were all five-year-olds.”

At the Traditional Latin Mass, “I came to know God,” Proctor continued. “I got to fully experience Christ Incarnate in flesh and blood, on my knees, deep in silence and prayer — to meditate on his union with me as he was placed reverently on my tongue by his holy servant. I closed my eyes when I received Jesus. I felt physically, spiritually, and emotionally transformed. Many times in the Cathedral, tears have come to me as I have prayed and focused on Jesus’s love and sacrifice for me.”

“Mass is not intended to celebrate people,” Proctor wrote. “That’s for luncheons, birthday parties, and maybe youth groups—but not Mass. The Mass is for the Lord. The Mass is where the priest is so reverent he faces the Lord, not the people, so that they don’t focus on him, but only on Christ.”

Juventutem (“youth” in Latin), an international federation of young people who attend and promote the Extraordinary Form of the Mass, has chapters around the world.

“We are a group of Catholic young adults who seek to implement Summorum Pontificum in the Archdiocese of Washington,” Juventutem's Washington, DC chapter explains. “We love the traditional Roman liturgy and seek to share it with the Church and the world. Come pray with us!”

Juventutem's Boston chapter “promotes the sanctification of youth by means of the traditions of the Catholic Church, faithful to the Church’s teaching and her authorities, and in spiritual union with those young people throughout the world who share our aspirations…Juventutem Boston also dedicates itself to an intercessory apostolate, praying with and for our Bishops and Priests in union with His Holiness Pope Francis.”