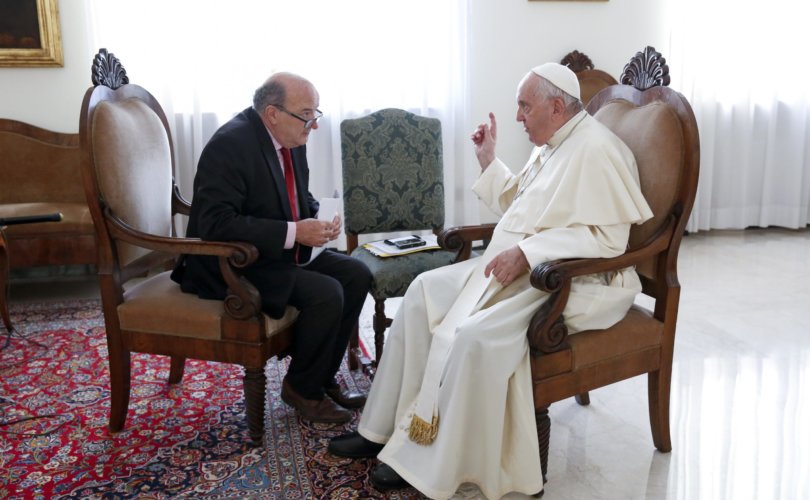 VATICAN CITY (LifeSiteNews) – Pope Francis has broken his silence on the U.S. Supreme Court decision to overturn Roe v. Wade, which grants states the power to outlaw abortion, saying that bishops must be “pastoral” with pro-abortion politicians.

In a 90-minute interview with Reuters’ Vatican correspondent Philip Pullella, published Monday, the Pope said that while he respected the court’s decision to overturn the landmark 1973 ruling which imposed abortion on all 50 states, he cannot “speak about it from a juridical point of view” because he had not studied the law, the report stated.

Although declining to comment on the once purported, and now overruled, “right” to abortion in the U.S., the pontiff did state his opposition to abortion, likening the barbaric practice to “hiring a hitman” in remarks reminiscent of his 2018 condemnation of abortion.

The Pope asked: “Is it legitimate, is it right, to eliminate a human life to resolve a problem?”

Pullella reportedly questioned Francis on the controversial issue of Catholic politicians receiving Holy Communion while openly supporting the “right” to kill children in the womb, especially in light of Catholic U.S. House Speaker Nancy Pelosi regularly receiving the Eucharist. Pelosi has advocated abortion and subsequently been barred from Holy Communion by her local bishop, Archbishop Salvatore Cordileone of San Francisco.

The Catholic Church teaches that the Eucharist is the literal body, blood, soul, and divinity of Jesus Christ and thus also that no-one who has committed a mortal sin is to present himself for Holy Communion until he has repented and confessed in the Sacrament of Reconciliation.

On distributing Communion to pro-abortion politicians like Pelosi, Francis, who spoke in Italian and without aides present, said, “When the Church loses its pastoral nature, when a bishop loses his pastoral nature, it causes a political problem. That’s all I can say.”

The Pope’s remarks echo one he made during a September 2021 in-flight interview. Then Pope Francis told reporters that the question of distributing the Eucharist to pro-abortion politicians must be determined in the “pastoral dimension,” without “condemning,” and also that he has never denied the Eucharist to anyone.

Francis described a “hypothesis” in his earlier interview by which priests may give the Eucharist to pro-abortion politicians, suggesting that priests might be “close, tender, and give Communion.” At the same time he condemned clerics whom he said  “go beyond the pastoral dimension” and “become a politician” by denying Communion to opponents of the Faith.

Pelosi has continued to receive Holy Communion at public Masses since Cordileone’s declaration, including at a Papal Mass on Wednesday.

His intention is clear, he approves the abomination of pro-abortion politicians receiving Holy Communion.

He cares nothing about sacrilege against the Blessed Sacrament or the salvation of the souls of Biden & Pelosi https://t.co/55ovi8mhDT

“His intention is clear, he approves the abomination of pro-abortion politicians receiving Holy Communion,” Donnelly stated.

The Pope also addressed rumors of his impending resignation, resolutely denying any intention to step down from the Petrine office.

Pullella noted that a planned trip to the Italian city of L’Aquila had sparked speculation that the Pontiff would retire, given the city’s association with Pope Celestine V and Pope Benedict XVI, both of whom resigned the papacy, coupled with his declining state of health.

Francis has suffered a sustained knee injury which has confined him to a wheelchair in the last few months. It has resulted in many cancelations in his travel schedule.

However, according to Pullella, when confronted with the proposition of resigning, the Pope “laughed the idea off.”

“All of these coincidences made some think that the same ‘liturgy’ would happen,” the Pope stated, explaining that the thought of resigning “never entered my mind. For the moment no, for the moment, no. Really!”

The day of his interview with Pullella, the Pope had intended to travel to the Democratic Republic of Congo and South Sudan, but was forced to cancel the trip owing to health issues. Doctors have also advised that without adequate rest within the next three weeks, he may also have to cancel his trip to Canada.

Francis nevertheless suggested that he may visit Moscow in the near future – the first time a Pope will have visited the Russian capital – despite the ongoing conflict with Ukraine, a battle which he has condemned as a “cruel and senseless war of aggression.”

Talks between Vatican Secretary of State Cardinal Pietro Parolin and Russian Foreign Minister Sergei Lavrov have so far not been fruitful, Pullella wrote, but the Pope indicated that he “would like to go (to Ukraine), and I wanted to go to Moscow first.”

The Pope said that the trip “is possible, after I come back from Canada, it is possible that I manage to go to Ukraine.”

“The first thing is to go to Russia to try to help in some way, but I would like to go to both capitals,” Francis said.