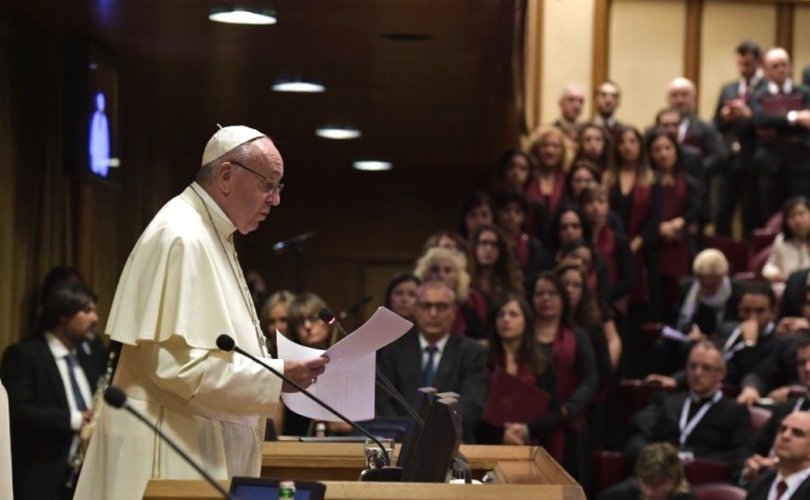 ROME, October 12, 2017 (LifeSiteNews) — Pope Francis has issued his strongest statement yet against the death penalty, calling it “contrary to the Gospel.” He said he would like the Catechism of the Catholic Church to change according to a “new understanding of Christian truth,” saying that only a “partial vision can think of ‘the deposit of faith’ as something static.”

The Pope made his comments in an October 11 speech to the Pontifical Council for the Promotion of the New Evangelization, which gathered to celebrate the 25th anniversary of the release of the Catechism of the Catholic Church promulgated by Pope St. John Paul II.

“The death penalty is an inhumane measure that humiliates, in any way it is pursued, human dignity,” said Pope Francis.

“It is, of itself, contrary to the Gospel, because it is freely decided to suppress a human life that is always sacred,” he added. “In the final analysis, God alone is the true judge and guarantor.”

The Catholic Church, following the Bible and the fathers and doctors of the Church, including St. Augustine and St. Thomas Aquinas, as well as Pope Pius XII, has always viewed capital punishment as a legitimate form of protection of the public from immediate danger and as a legitimate punishment for serious crimes.

Pope Francis has gone beyond the position held by Pope St. John Paul II and Pope Emeritus Benedict XVI who, while opposing capital punishment, never held that it was, in itself, intrinsically evil.

St. Thomas Aquinas, in his classic defense of capital punishment in the Summa Theologica, argued that “if a man be dangerous and infectious to the community, on account of some sin, it is praiseworthy and advantageous that he be killed in order to safeguard the common good.”

Pope Pius XII defended in 1955 the authority of the State to punish crimes, even with the death penalty. He argued that capital punishment is morally defensible in every age and culture because “the coercive power of legitimate human authority” is based on “the sources of revelation and traditional doctrine.”

Both the Old and New Testaments indicate that the death penalty can be legitimate. For instance, Genesis 9:6 states: “Whoever sheds the blood of man, by man shall his blood be shed; for God made man in his own image.” Or again, St. Paul in his Letter to the Romans teaches that the state “does not bear the sword in vain [but] is the servant of God to execute his wrath on the wrongdoer.”

The Catechism of the Catholic Church teaches that the death penalty is morally permissible.

“The efforts of the state to curb the spread of behavior harmful to people's rights and to the basic rules of civil society correspond to the requirement of safeguarding the common good. Legitimate public authority has the right and duty to inflict punishment proportionate to the gravity of the offense…Assuming that the guilty party's identity and responsibility have been fully determined, the traditional teaching of the Church does not exclude recourse to the death penalty, if this is the only possible way of effectively defending human lives against the unjust aggressor,” stated the Catechism [bold added].

Professors Edward Feser and Joseph Bessette have argued that if the Pope were to teach that capital punishment is inherently immoral, then he would be “contradicting the teaching of scripture, the Fathers, and all previous popes, and substituting for it ‘some new doctrine.’” The two published a book on the topic this year titled By Man Shall His Blood Be Shed: A Catholic Defense of Capital Punishment.

“The fact is that it is the irreformable teaching of the Church that capital punishment can in principle be legitimate, not merely to ensure the physical safety of others when an offender poses an immediate danger (a case where even John Paul II was willing to allow for the death penalty), but even for purposes such as securing retributive justice and deterring serious crime,” the authors wrote in a June 2017 article for Catholic World Report titled Why the Church Cannot Reverse Past Teaching on Capital Punishment.

“What is open to debate is merely whether recourse to the death penalty is in practice the best option given particular historical and cultural circumstances. That is a ‘prudential’ matter about which popes have no special expertise,” they said.

“This was the uniform teaching of scripture and the Fathers and Doctors of the Church, and it was reaffirmed by popes and also codified in the universal catechism of the Church promulgated by Pope St. Pius V in the sixteenth century, as well as in numerous local catechisms,” they added in a July 2017 follow-up article titled Why the Death Penalty is Still Necessary.

The authors list five reasons why retributive punishment, which could take the form of the death penalty, “makes the world a safer place and upholds the common good”:

Pope Francis indicated in his speech that the teaching of the Catechism would change according to a “new understanding of Christian truth.”

“Tradition is a living reality and only a partial vision can think of ‘the deposit of faith’ as something static,” he said.

“The Word of God cannot be conserved in mothballs as if it were an old blanket to be preserved from parasites. No. The Word of God is a dynamic reality, always alive, that progresses and grows because it tends towards a fulfillment that men cannot stop.”

This “law of progress,” the Pope said, “appertains to the peculiar condition of the truth revealed in its being transmitted by the church, and does not at all signify a change of doctrine. One cannot conserve the doctrine without making it progress, nor can one bind it to a rigid and immutable reading without humiliating the Holy Spirit.”

The subject of capital punishment “should find a more adequate and coherent space in the Catechism of the Catholic Church,” the Pope said.