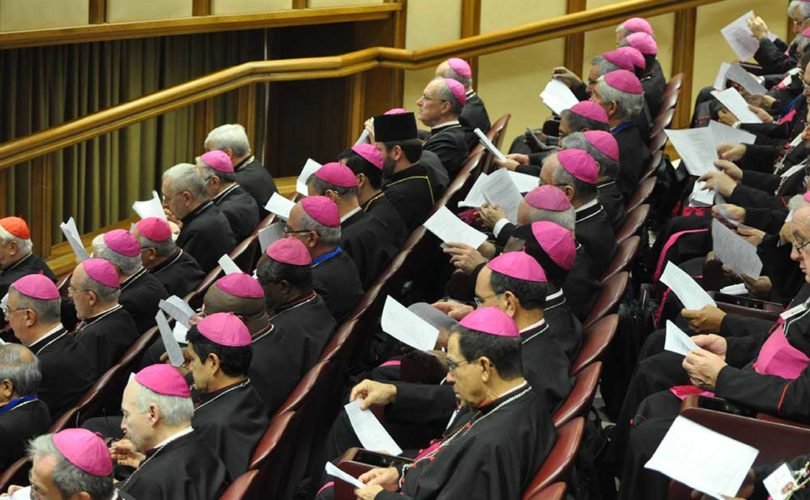 ROME, Italy, March 9, 2020 (LifeSiteNews) – Pope Francis has decided that the next world synod of bishops in October 2022 will focus on “synodality.”

The motto, “For a synodal Church: communion, participation, and mission,” was announced Saturday by Cardinal Lorenzo Baldisseri, the secretary general of the synod of bishops.

Cardinal Raymond Burke criticized the concept of “synodality” in a 2018 interview.

“It’s become like a slogan, meant to suggest some kind of new church which is democratic and in which the authority of the Roman Pontiff is relativized and diminished — if not destroyed,” said Cardinal Burke in an exclusive interview with LifeSiteNews at that time.

“This is typical of a lot of things in the Church today. The enthusiasts for ‘synodality’ keep talking about it, but I can’t find any definition of what it is,” he said.

According to Cardinal Burke, the traditional meaning of the term synod used to be “to find ways to teach the Catholic faith more effectively and to promote the proper discipline in the Church. That’s basically what a synod of bishops is — that’s its definition.”

“It’s a meeting of bishops to assist the Pope to see how to teach the faith more effectively and how to promote a more faithful Christian life in accordance with the discipline of the Church,” he continued. “But now, seemingly, the term ‘synodality’ is being used to suggest that conferences of bishops would have doctrinal authority.”

Cardinal Robert Sarah, the prefect of the Congregation for Divine Worship and the Discipline of the Sacraments, has also been critical of synodality as it has been presented during the current pontificate.

“People are trying to detach the local churches from Rome. People want to be autonomous with regard to Rome and the vicar of Jesus Christ, that is, Peter, he who gives direction to the church of Rome,” Sarah said.

Bishop Athanasius Schneider has also raised concerns about the concept of synodality, saying in a 2018 interview that that phrase was being used by top Church leaders at the time of the Youth Synod as a way to “promote their own agenda.”

“Pushing through the theme of ‘synodality’ in the final document (of the Youth Synod), in disregard for authentic synodal methods — since this topic was not sufficiently debated in the synod hall, and there was not enough time to read the final text, which was given to the bishops only in Italian – is a demonstration of an exasperated clericalism. Such ‘synodal’ clericalism intends to transform the life of the Church into a worldly and Protestant parliament style with continuous discussions and voting processes on matters that cannot be put to a vote,” he said.

Past remarks made by Pope Francis offer some insight concerning the direction the upcoming synod might take. In a 2015 speech, he affirmed, “It is precisely this path of synodality which God expects of the Church of the third millennium.”

The Holy Father pointed out that from the beginning of his ministry “as bishop of Rome” in 2013, “I sought to enhance the synod, which is one of the most precious legacies of the Second Vatican Council.”

He referred to Pope Paul VI, who established the synod of bishops as an institution in the Church in 1965, just before Vatican II came to a close. “For Blessed Paul VI, the synod of bishops was meant to reproduce the image of the Ecumenical Council and reflect its spirit and method,” Pope Francis said.

Francis called synodality a “constitutive element of the Church.” Trying to define the term as the “journeying together” of “laity, pastors, the bishop of Rome,” the Holy Father admitted that synodality is “an easy concept to put into words, but not so easy to put into practice.”

Emphasizing the importance of listening, the Pope said, “A synodal Church is a Church which listens, which realizes that listening ‘is more than simply hearing.’”

“It is a mutual listening in which everyone has something to learn. The faithful people, the college of bishops, the bishop of Rome: all listening to each other, and all listening to the Holy Spirit, the ‘spirit of truth,’ in order to know what he ‘says to the churches,’” he continued.

The Pope identified three steps in the synodal process, beginning by “listening to the people of God, which ‘shares also in Christ’s prophetic office.’”

In a second step, the process of the synod involves listening to the pastors. “Through the synod fathers, the bishops act as authentic guardians, interpreters and witnesses of the faith of the whole Church, which they need to discern carefully from the changing currents of public opinion,” Francis explained.

Finally, the process “culminates in listening to the bishop of Rome, who is called to speak as “‘pastor and teacher of all Christians,’ not on the basis of his personal convictions but as the supreme witness” to the whole faith of the Church.

According to Pope Francis, the hierarchy in the Church is like “an inverted pyramid.”

“Consequently, those who exercise authority are called ‘ministers,’ because, in the original meaning of the word, they are the least of all. It is in serving the people of God that each bishop becomes, for that portion of the flock entrusted to him,” the vicar “of that Jesus who at the Last Supper bent down to wash the feet of the apostles,” he explained.

In his speech, Pope Francis also said there are three levels of synodality, starting with the particular churches, which are the dioceses. In this context, Pope Francis spoke of starting “from people and their daily problems.” Only then, he argued, “can a synodal Church begin to take shape.”

The German bishops have been using the concept of synodality to push their own agenda in their “synodal path” of overthrowing Catholic sexual teaching.

Regarding the second level of synodality, Pope Francis spoke mainly of bishops’ conferences, but also ecclesiastical provinces, namely archdioceses. “We need to reflect on how better to bring about, through these bodies, intermediary instances of collegiality, perhaps by integrating and updating certain aspects of the ancient ecclesiastical organization,” the Holy Father said.

“The hope expressed by the Council that such bodies would help increase the spirit of episcopal collegiality has not yet been fully realized. We are still on the way, part-way there. In a synodal Church, as I have said, ‘it is not advisable for the Pope to take the place of local Bishops in the discernment of every issue which arises in their territory,’” he continued.

It has been speculated that “intermediary instances of collegiality” could be strengthened by the long-awaited reform of the curia. A draft specifically referred to the “genuine doctrinal authority” of bishops’ conferences.

On the highest level of synodality, the synod of bishops is to be found, Pope Francis said. Such a synod represents all the bishops, turning into “an expression of episcopal collegiality within an entirely synodal Church.”

Since 2013, Pope Francis has organized four synods. The first and second, taking place in 2014 and 2015, focused on the family in the Church. Those two synods resulted in the apostolic exhortation Amoris Laetitia, paving the way for “remarried” people living in adultery to receive Holy Communion.

The third synod, in 2018, focused on youth, and the most recent one, often referred to as the Amazon synod, took place in 2019. In that context, Pachamama statues were used in the Vatican during official religious ceremonies, prompting many accusations of idol worship.

Pope Francis, in his 2015 speech, emphasized the importance of synodality for the relationship between the Catholic Church and other Christian communities.

“I am persuaded that in a synodal Church, greater light can be shed on the exercise of the Petrine primacy. The Pope is not, by himself, above the Church; but within it as one of the baptized, and within the college of bishops as a bishop among bishops, called at the same time — as successor of Peter — to lead the church of Rome which presides in charity over all the churches,” Francis said.

No information going beyond the motto of the upcoming synod on synodality has been disclosed. However, Marc Frings, secretary general of the Central Committee of German Catholics and a key player of the Synodal Path, already signaled the German influence that can be expected.

“For now, (Pope Francis) is ‘only’ dreaming of true synodality. By the fall of 2022, (the Synodal Path) will be over, for the time being. German Catholics will be ready to share experiences and concrete results with the universal Church,” he tweeted.