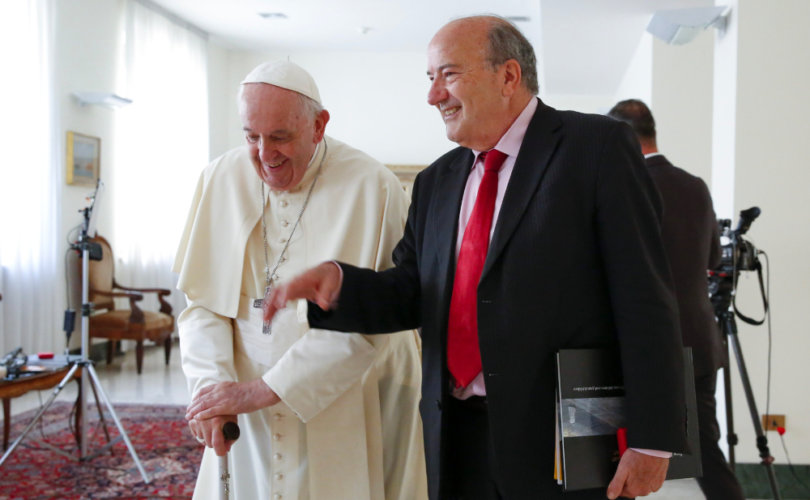 VATICAN CITY (LifeSiteNews) — Pope Francis has stated that there must be “zero tolerance” to sexual abuse within the Catholic Church but remained silent on his own record regarding the protection and cover-up of abuser clerics.

Speaking to Reuters on July 2, in an interview released July 8, Pope Francis stated that “we have to fight against every single case.”

“As a priest, I have to help people grow and save them. If I abuse, I kill them. This is terrible. Zero tolerance,” he said.

The Pontiff made the comments as part of a longer interview which is being released in segments. LifeSiteNews has already reported on the papal comments to Reuters regarding the overturning of Roe v. Wade, Francis ruling out a possible papal resignation, his defense of the controversial Vatican-China deal, and his announcement that women will join the committee appointing Catholic bishops.

In his latest released comments, Francis said that after the explosive exposé of the Boston sex abuse cover-up, the Church “started zero tolerance slowly and moved forward,” a direction which he said was “irreversible.”

While Pope Francis spoke of a “zero tolerance” policy towards abuse, his personal record on the matter has been more permissive.

Pope Francis, friend, promoter and protector of sex abusers, on whose behalf he has lied, digs himself deeper into a hole. https://t.co/vaYIelMBT2

The Pope has blamed the sex abuse crisis of minors on the “plague of clericalism” – while not mentioning clerical homosexuality – but has not commented on his own handling of clerics accused of abuse, including ex-Cardinal Theodore McCarrick and Bishop Gustavo Zanchetta.

The much awaited McCarrick report, released in November 2020, revealed that, contrary to Francis’ statements, he had been informed of the immoral behaviour of Theodore McCarrick but did not act upon them.

As LifeSite’s Dr. Maike Hickson wrote: “Pope Francis did know about the sex abuse allegations against McCarrick and that the Vatican had taken steps, from 2006 on, to remove him from the public, by telling him to move into a more remote residence and to hold back in his public appearances and travels. Pope Francis chose not to follow up.”

Pope Francis has also come under scrutiny for his relationship with disgraced Bishop Zanchetta, who was sentenced recently to four and half years in prison after having been found guilty of sexually abusing two seminarians. LifeSiteNews has provided a detailed timeline of the Francis–Zanchetta relationship.

When Zanchetta was summoned to Rome in 2015 after “nude selfies” of him were found on his phone, Francis accepted the bishop’s claim that he had been the subject of a phone hack.

Following numerous signed sworn testimonies from priests in Zanchetta’s Orán diocese, confirming the existence of the selfies on Zanchetta’s phone and his “strange attitude” towards seminarians, the bishop abruptly left his diocese for “ill health.”

He was soon moved into Francis’ Vatican as an advisor to the Administration of the Patrimony of the Holy See (APSA), ranking third in the Curial department and having jurisdiction over various properties owned by the Holy See. Francis specially created the position for Zanchetta.

When a civil trial was begun against Zanchetta in his native Argentina, it was delayed as the CDF refused to send requested files from its own canonical trial of the bishop. After waiting several months, prosecutors decide to proceed with Zanchetta’s trial in February, without the documents the Vatican was asked to provide.

Francis told Reuters that regarding new Church measures to prevent sexual abuse, “there is resistance, but with each new step there is growing awareness that this is the way to go.” Reuters did not mention whether the pontiff gave any further information about this statement.

In 2019, the 85-year-old Pontiff issued a motu proprio responding to clerical sex abuse, entitled “Vos estis lux mundi,” making the cover up of sex abuse a crime under Canon Law. However the document was nevertheless lacking in that it did not condemn consensual acts of homosexuality by members of the clergy

Despite the reported purpose of dealing with sex abuse, the motu proprio was not received well by all. Writing in First Things Phil Lawler stated that “the motu proprio institutes different procedures, but does not guarantee different results.”

Speaking to German television in early 2019, Cardinal Raymond Burke said that Pope Francis’ response to abuse was “more confusing than anything.”

Pope blames US bishops for ‘crisis of credibility’ on sex abuse