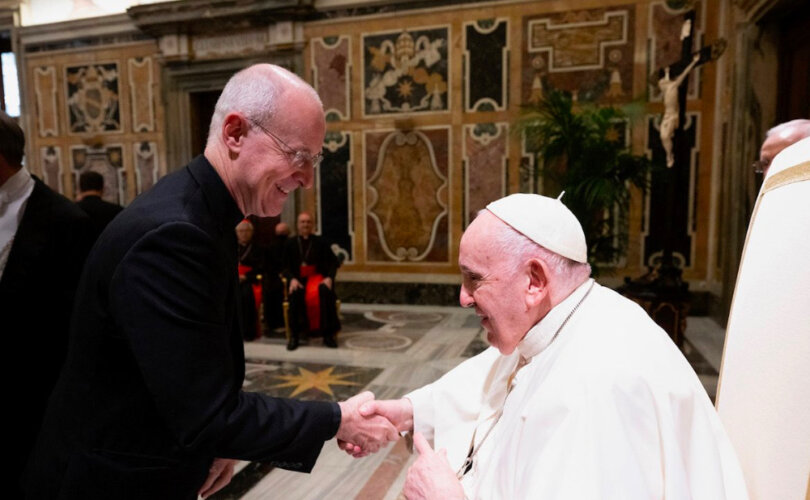 VATICAN CITY (LifeSiteNews) — After meeting privately with Father James Martin S.J. on Thursday, Pope Francis described the pro-LGBT Jesuit as a “man who has values, a communicator who also knows how to teach you the way of communication with God.”

Pope Francis met with Martin on November 10, in a private meeting which lasted 45 minutes, during which time the pair covered topics including “the joys and hopes, the griefs and anxieties, of LGBTQ Catholics.”

In personal comments delivered before his prepared address, Francis referenced the “communication of values” which he urged the Dicastery to perform, highlighting Martin as an example of this.

“We cannot descend to communication without values. We have to communicate with our values,” stated the Pope.

“This does not mean that we have to pray the novena to a saint every day,” he added. “Christian values, the values that are behind, the values that teach us to move forward. The person who plays for human values.”

“For example,” said Francis, “I see James Martin here. ‘Ah, yes, this one works….’ Yes, but this one wrote a book called ‘To Learn to Pray’ [Teach Us to Pray].”

Francis then recommended Martin’s 2021 book to the entire Dicastery, arguing that it would teach them about “communication with God.”

Read it, because this teaches you how to pray. A man who has values, a communicator who also knows how to teach you the way of communication with God. That’s what being a communicator is all about. To go, to walk, to risk, with values, convinced that I am giving my life with my values, Christian values and human values.

Continuing, Francis echoed his oft-repeated remarks against “rigid” Catholics, declaring that he is “wary of aseptic communicators, these who are pure technique, pure.”

“Technique alone doesn’t help, technique helps you if there is a heart behind it,” he said.

Catholics firmly rejected the argument that Martin was a “communicator” of the “values” of God after heterodox outlet The Tablet noted the meeting was “significant,” and claimed Martin faced “attacks…due to his ministry to LGBT Catholics.”

Catholic Family News managing editor Matt Gaspers rejected this, saying that Martin “faces legitimate scrutiny/criticism for refusing to condemn unnatural vice and call those who engage in such wicked behavior to repentance/conversion.”

FACT CHECK: @JamesMartinSJ doesn’t face “attacks … due to his ministry to LGBT Catholics”. He faces legitimate scrutiny/criticism for refusing to condemn unnatural vice and call those who engage in such wicked behavior to repentance/conversion.https://t.co/6Hled97Ocq https://t.co/DyFrbLOceK

Francis and Martin previously met privately in September 2019, in what was reportedly already their third meeting but their first substantial conversation. Both Martin, and America Magazine of which he is an “editor-at-large,” proclaimed the 2019 meeting as being “a public sign” of the pontiff’s “support” for Martin’s work promoting LGBT ideology in the name of Catholicism.

Their latest meeting was again taken as a sign of papal approval of his anti-Catholic and pro-LGBT activism – a sign which is now unmistakable given Francis’ comments to the Dicastery on Friday.

Martin’s favor with Pope Francis comes alongside his longstanding record of promoting LGBT ideology in dissent from Catholic teaching.

The Jesuit priest is described as “arguably the most prominent activist” in the Church for LGBT issues.

Among his most notorious actions, Martin has promoted an image drawn from a series of blasphemous, homoerotic works, showing Christ as a homosexual, promoted same-sex civil unions, and has described viewing God as male as “damaging.”

Despite this, the Vatican invited him to speak at the 2018 World Meeting of Families in Dublin on “Exploring how Parishes can support those families with members who identify as LGBTI+.”

Indeed, in the past 18 months, Francis has made a number of public displays of support for Martin, including sending two letters to Martin and his LGBT Outreach group.

— Article continues below Petition —
Join Bishops in calling out Pope Francis' statement for contradicting the faith
Show Petition Text
5736 have signed the petition.
Let's get to 6000!
Thank you for signing this petition!
Add your signature:
Show Petition Text

In August, Martin published a letter he had received from the Pope which praised Martin’s pro-LGBT conference held in June. The event featured a range of pro-LGBT speakers advocating positions contrary to the Catholic Church’s teaching on homosexuality, but Francis lauded Martin for “working in the culture of encounter,” which, he said, “shortens distances and enriches us with our differences, just as Jesus did.”

Despite Martin’s continued LGBT activism and the public support he receives from Francis, the Catholic Church teaches that “‘homosexual acts are intrinsically disordered’ and “are contrary to the natural law,” adding explicitly that “under no circumstances can they be approved.”

The Congregation for the Doctrine of the Faith’s (CDF) 1986 document “On the pastoral care of homosexual persons” also rebuffs the Pope’s version of “outreach,” writing that a “truly pastoral approach will appreciate the need for homosexual persons to avoid the near occasions of sin.”However, since the CDF’s March 2021 responsum condemning same-sex “blessings,” Pope Francis has made numerous public statements praising and supporting advocates of LGBT ideology and same-sex civil unions.