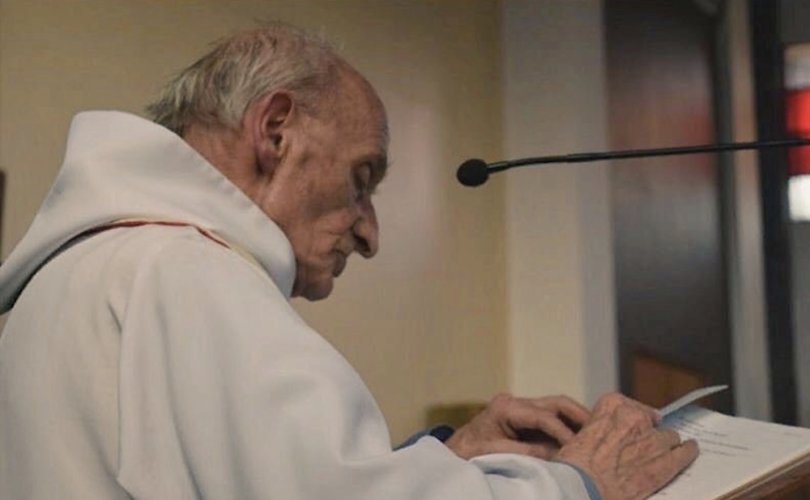 VATICAN CITY, September 14, 2016 (LifeSiteNews) — Father Jacques Hamel is a “martyr and the martyrs are blessed; we should pray to him,” Pope Francis said at a Mass offered Wednesday morning for the soul of the French priest, who was murdered by Islamic State terrorists July 26 while saying morning Mass.

“To kill in the name of God is satanic,” added the pontiff in his homily for the memorial Mass, attended by Archbishop Dominque Lebrun and 80 other pilgrims from the diocese of Rouen.

“Today there are Christians murdered, tortured, imprisoned, and slaughtered because they do not deny Jesus Christ. In this history, we come to our Père Jacques: He is part of this chain of martyrs,” said Francis, according to aleteia.org translation.

“Christians who suffer today — either in prison, or by death or torture — for not denying Jesus Christ reveal the cruelty of this persecution. And this cruelty which demands apostasy — let us say the word — is satanic. And how good it would be for all religious confessions to say: ‘To kill in the name of God is satanic,’” the pope observed.

Francis’s words have led to a general consensus that he intends to canonize Fr. Hamel, and according to the Telegraph, Archbishop Lebrun stated after the Mass that the “Pope had told him that the French priest should from now on be ‘venerated’ – a further indication that his path to sainthood is all but assured.”

Crux also reported that “Lebrun said the pope had told him to put the image of Hamel in local churches, because he’s ‘blessed,’ and that if anyone protests against it, the archbishop could say that he was doing so with the pope’s permission.”

A photograph of the 85-year-old Hamel — slain by two 19-year-old self-proclaimed members of ISIS, themselves fatally shot by police as they came out of the church in Saint-Etienne-du-Rouvray — was on the altar during the Mass, which was broadcast live by the Vatican Television Center.

“Father Jacques Hamel had his throat slit on the Cross, precisely as he was celebrating the Sacrifice of the Cross of Christ. A good man, meek, fraternal, who always sought to make peace, was murdered as if he were a criminal. This is the satanic thread of the persecution,” Pope Francis said.

What “makes me think a lot” were Fr. Hamel’s last words, he said. “In the midst of this tragedy which he saw coming, a gentle man, a good man, a man who fostered brotherhood, did not lose the lucidity to accuse and clearly say the name of the killer, and he said it clearly: “Be gone, Satan!’”

“This is a mystery that becomes martyrdom for the salvation of men. Jesus Christ, the first Martyr, the first to give his life for us. And the entire history of Christian martyrdom, from the first centuries until today, begins from this mystery of Christ.”

Meanwhile, Catholic blogger Fr. John Zuhlsdorf observed that notwithstanding the pope’s remarks, and the evidence that Fr. Hamel was indeed martyred for the faith, it still remains for the Catholic Church to officially declare him blessed, venerable and a martyr.