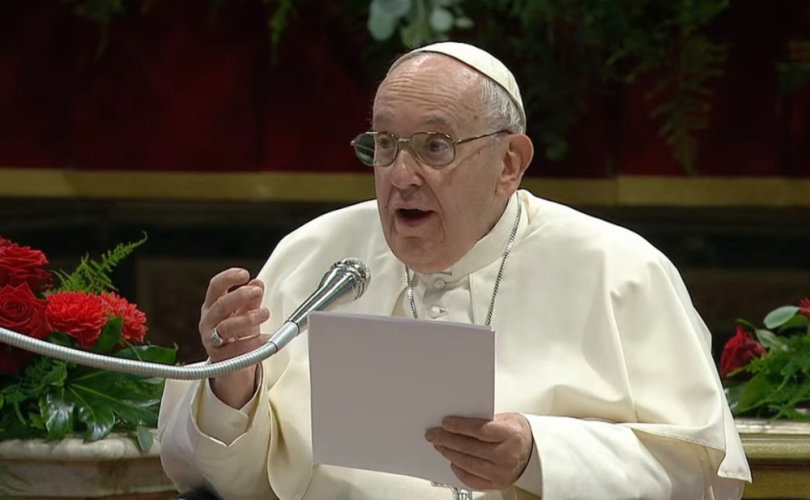 VATICAN CITY (LifeSiteNews) – Pope Francis stated Sunday that the Holy Spirit is an “author of division” in the Church and was subsequently defended by L’Osservatore Romano, which used Francis’ words to explain the “general crisis” in the Church as a sign of a new Pentecost.

Pope Francis delivered his Pentecost homily on June 5 from his wheelchair while Cardinal Giovanni Battista Re, Dean of the College of Cardinals, celebrated the Mass in St. Peter’s Basilica.

Drawing from the Gospel for the Mass, Pope Francis stated that the Holy Spirit “is practical, he is not an idealist.”

“The Spirit leads us to love, concretely, here and now, not an ideal world or an ideal Church, an ideal religious congregation, but the real ones, as they are, seen in broad light of day, with transparency and simplicity,” the Pontiff declared.

The Pope’s most notable phrase from his homily, however, was his depiction of the third Person of the Holy Trinity as the “author of division,” a term Francis explained by saying:

Pope Francis closed by urging Catholics to invoke the Holy Spirit in order to become more “open to the world” as a result. “Let us invoke him each day, so that he can remind us to make God’s gaze upon us our starting point, to make decisions by listening to his voice, and to journey together as Church, docile to him and open to the world.”

The striking phrase “author of division” was subsequently picked up by L’Osservatore Romano, the Vatican newspaper that published an article June 6 entitled “Blessed division,” written by Father Luigi Maria Epicoco, an assistant at the Vatican’s Dicastery for Communication.

Fr. Epicoco wrote that “the Pope enhances a detail that so many times escapes us: On the day of Pentecost, according to the account in the Acts of the Apostles, the Spirit’s action manifests itself as a force that turns the established order upside down; it is an action that undermines the stillness that the apostles had been struggling to recover after the events that had occurred. In a word: The Spirit begins his action by wreaking havoc.”

READ: Half of the traditional Catholics on the Chartres pilgrimage were under 20

Fr. Epicoco likened the Holy Spirit’s descent upon the Apostles to the current “crisis” in the Church, stating that the very existence of a “crisis” is proof that “we are entering a new time of Pentecost.”

Too many times we can fall into the trap of thinking that the general crisis that the Church is also going through is just bad news. Some choices, some decisions, some new styles have also brought disarray, din, to the Church, but this thing instead of being proof that we are going astray is instead the testimony that we are entering a new time of Pentecost.

The columnist used Pope Francis’ homily to contrast the “harmony” of the Holy Spirit with “discipline and tranquility” and the “synchronicity of a barracks parade,” in language that echoed Pope Francis’ regular attacks on “rigid” Catholics. Epicoco wrote:

Certain situations, in fact, force us to look at ourselves with more truth and to divide ourselves, in the sense of “distinguishing ourselves,” that is, to discover what is truly ours, what pertains to a specific charism. Only in this way can the Spirit give us a harmony that is newness and not mere recovery of discipline and tranquility. We must ask the Church for the power of Pentecost, not the synchronicity of a barracks parade.

While the Pope was clearly referring to the miracle of Pentecost by which the Apostles spoke before the crowds in Jerusalem in all the various languages of those present, it was not the Holy Spirit that created the “division of languages,” as Francis suggested. (Acts 2: 3-12) As Scripture recounts, the division of languages among the crowd was already present and the gift of the Holy Spirit enabled the Apostles to speak in the diverse languages.

Pope Francis’ promotion of the Holy Spirit as the “author of division” also places him in contradiction to teachings of his predecessor, Pope Benedict XVI. In his 2012 homily for the feast of Pentecost, Benedict XVI stated “at Pentecost, where there had been division and alienation, unity and understanding were born.”

Indeed, Pope Francis’ recent homily contradicted his address at the Regina Caeli for Pentecost last year, when the Pope described the Holy Spirit as “harmony, it is unity, it unites differences.”