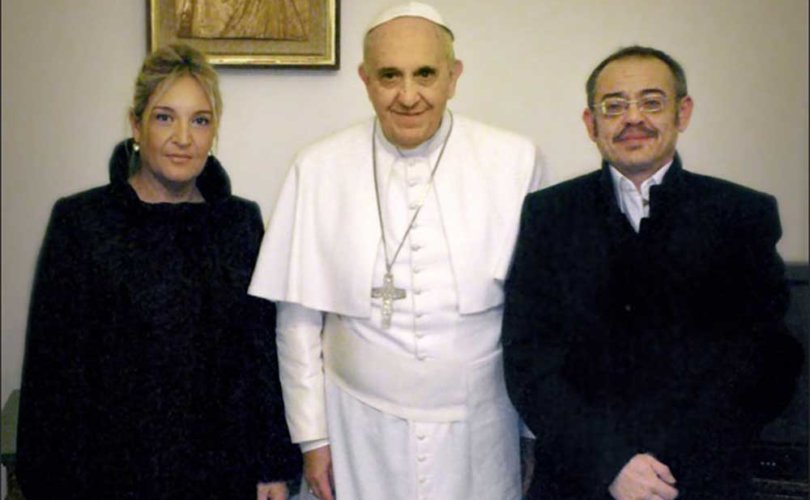 Pope Francis meeting with woman who underwent sex-change surgery (to right of pope) and her 'wife' (to left of pope.)

October 3, 2016 (LifeSiteNews) – Despite the Vatican’s assertion that a so-called sex-change surgery does not alter the sex of a person, Pope Francis has nevertheless chosen to refer to a woman who underwent a sex-change operation as a “man,” and also referred to her as having “married” another woman and admitted to receiving them in the Vatican last year.

As with most of his most controversial remarks, the statements came during an in-flight press scrum. On October 2, on his return flight from his papal visit to Georgia and Azerbaijan, the Pope referred to a woman who “felt like a man” but “was physically a young woman.” After a sex-change surgery in her twenties, Pope Francis said, “he got married.”

“He wrote me a letter saying that, for him, it would be a consolation to come [see me] with his wife,” the pope said. “I received them and they were very happy,” Pope Francis added. Clarifying his use of pronouns, the pope said, “He that was her but is he.” (Translation by Josh McElwee, the NCR reporter who asked the question.)

Pope Francis drew a distinction between his frequent condemnation of teaching ‘gender theory’ to young children in classrooms and welcoming, accompanying, and integrating a person who has “this tendency” and even has “a sex change.”

The meeting of the Pope with the woman with the sex-change surgery and her female partner took place in January 2015 and while it was widely reported in the media with photos, the Vatican refused comment. The woman, now called Diego Neria Lejarraga, said the pope had surprised her by calling her twice out of the blue in December 2014. Neria had written to Francis complaining of rejection from the local parish after she had undergone “gender reassignment.”

Neria said that it was Pope Francis who asked for the meeting, telling her that he would make the arrangement and call her back. Francis welcomed the two into his private suite at Domus Santa Marta to what she said was a “strictly private meeting.”

In her letter to the Pope, Neria had specifically noted that she felt excluded from the Church because of her decision, and that she was now “afraid” to receive Communion. She did not tell the media what the pope said on the matter, only mentioning that he embraced her. However, Pope Francis’ own recollection of the matter deals with Communion.

The Pope spoke of an old retired priest who welcomed Neria and a young new pastor who was harsh. “When the new pastor would see him, he would shout to him from the sidewalk: 'You will go to Hell.'” Francis said. “But when he'd meet his old priest, he would say to him, 'How long has it been since you've confessed? Come on, confess so you can take Communion.'” (Translation by the US Bishops’ Catholic News Service.)

In 2000, the Vatican's Congregation for the Doctrine of Faith issued confidential guidance to bishops noting that ‘sex-change’ procedures do not alter a person’s gender. The document instructed bishops never to alter the sex listed in parish baptismal records and said Catholics who have undergone “sex-change” procedures are not eligible to marry because in the eyes of the Church they would be marrying someone of the same sex.

A literal translation of the Pope’s full remarks and the question issued by Catholic News Agency follows:

Josh McElwee, National Catholic Reporter: Thank you, Holy Father. In that same speech yesterday in Georgia, you spoke, as in so many other countries about gender theory, saying that it is a great enemy and a threat against marriage. But, I would like to ask you, what would you say to someone who has struggled with their sexuality for years and feels that there is truly a problem of biology, that his aspect doesn't correspond to what he or she feels is their sexual identity. You, as a pastor and minister, how would you accompany these people?

Pope Francis: First of all: in my life as a priest and bishop, even as Pope, I have accompanied people with homosexual tendencies, I have also met homosexual persons, accompanied them, brought them closer to the Lord, as an apostle, and I have never abandoned them. People must be accompanied as Jesus accompanies them, when a person who has this condition arrives before Jesus, Jesus surely doesn't tell them 'go away because you are homosexual.' What I said is that wickedness which today is done in the indoctrination of gender theory…a French father told me that he was speaking with his children at the table, he and his wife were Catholics, 'rosewater Catholics,' but Catholics! And he asked his 10-year-old son: 'What do you want to be when you grow up?'- 'a girl.' The father realized that at school they were teaching him gender theory, and this is against the natural things. One thing is that a person has this tendency, this condition and even changes their sex, but it's another thing to teach this in line in schools in order to change the mentality. This is what I call ideological colonization. Last year I received a letter from a Spaniard who told me his story as a child, a young man, he was a girl, a girl who suffered so much because he felt he felt like a boy, but was physically a girl. He told his mother and the mom…(the girl) was around 22 years old said that she would like to do the surgical intervention and all of those things. And the mother said not to do it while she was still alive. She was elderly and she died soon after. She had the surgery and an employee of a ministry in the city of Spain went to the bishop, who accompanied (this person) a lot. Good bishop. I spent time accompanying this man. Then (the man) got married, he changed his civil identity, got married and wrote me a letter saying that for him it would be a consolation to come with his wife, he who was she, but him! I received them: they were happy and in the neighborhood where he lived there was an elderly priest in his 80s, an elderly pastor who left the parish and helped the sisters in the parish. And there was the new (priest). When the new one he would yell from the sidewalk: 'you'll go to hell!' When he (CNA suggests this refers to the new priest but CNS and NCR suggest it refers to the woman) came across the old one, he would say: 'How long has it been since you confessed? Come, come, let's to so that I can confess you and you can receive communion.' Understood? (emphasis LifeSite)

Life is life and things must be taken as they come. Sin is sin. And tendencies or hormonal imbalances have many problems and we must be careful not to say that everything is the same. Let's go party. No, that no, but in every case I accept it, I accompany it, I study it, I discern it and I integrate it. This is what Jesus would do today! Please don't say: 'the Pope sanctifies transgenders.' Please, eh! Because I see the covers of the papers. Is there any doubt as to what I said? I want to be clear! It's moral problem. It's a human problem and it must be resolved always can be with the mercy of God, with the truth like we spoke about in the case of marriage by reading all of Amoris Laetitia, but always with an open heart. And don't forget that chapter Vézelay, it's very beautiful, eh! Very beautiful.

Is Vatican, under Pope Francis, moving away from teachings of John Paul II on life and marriage?

Why I cringe when Pope Francis gets on an airplane