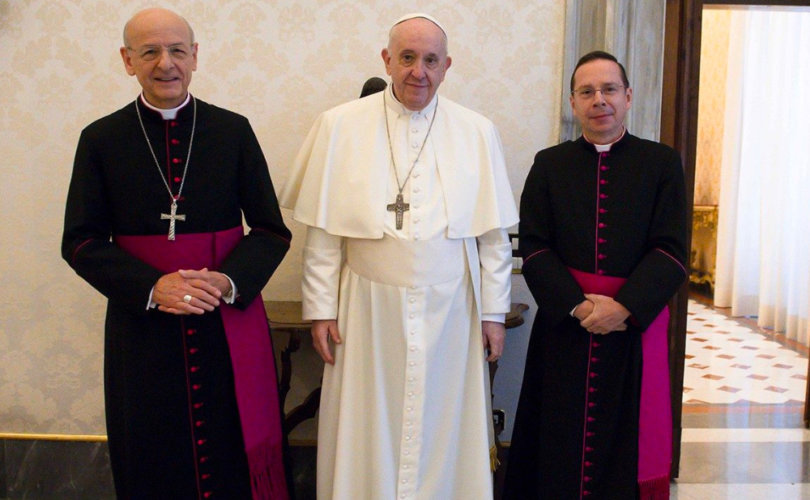 VATICAN CITY (LifeSiteNews) — Pope Francis has issued a motu proprio stipulating that the personal prelature of Opus Dei will no longer be led by a bishop, saying that “a form of government based more on charism than on hierarchical authority is needed.”

The Pontiff’s motu proprio, entitled “Ad charisma tuendum,” was published by the Holy See July 22, having been approved by Francis July 14, and is due to take effect August 4 by publication in L’Osservatore Romano.

Francis wrote that the motu proprio is centered on his recent reforms of the Roman Curia in Praedicate evangelium, and is “intended to confirm the Prelature of Opus Dei in the authentically charismatic sphere of the Church, specifying its organization in keeping with the witness of the Founder, St. Josemaría Escrivá de Balaguer, and the teachings of conciliar ecclesiology about personal prelatures.”

‘Government based more on charism than on hierarchical authority’

In a number of changes to Opus Dei’s constitution, which was issued by Pope John Paul II in 1982, Francis announced that it would no longer be led by a bishop, citing the reason that it was to protect the personal prelature’s “specific charism.” He referenced a need for a “form of government based more on charism than on hierarchical authority”:

With full respect for the nature of the specific charism described by the above-mentioned Apostolic Constitution, it is intended to strengthen the conviction that, for the protection of the peculiar gift of the Spirit, a form of government based more on charism than on hierarchical authority is needed. Therefore, the Prelate will not be honored or insignificant with the episcopal order.

— Article continues below Petition —
CANCELED: Stand with Fr. JesusMary after he was BARRED from Priestly Ministry for Criticizing Pope Francis!
Show Petition Text
9814 have signed the petition.
Let's get to 10000!
Thank you for signing this petition!
Add your signature:
Show Petition Text

While the prelate leading Opus Dei will no longer be a bishop, Francis nevertheless granted “the use of the title of Supernumerary Apostolic Protonotary with the title of Reverend Monsignor” so that he may use “the insignia corresponding to this title.”

Moved to Dicastery for Clergy

The Dicastery for Clergy is currently led by Cardinal-designate Lazarus You Heung-sik, a Korean prelate currently on the rise in the Bergoglian Vatican, having been appointed to the Dicastery for Bishops on July 13 and to the Congregation for Divine Worship on June 1.

Cardinal Heung-sik has defended synodality as “the very form” of the Church and said that “we need to think out the relation between ordained priesthood and baptismal priesthood to find new forms of ‘ministeriality’ allowing the Church to go out to meet the world” in a “renewed” way of evangelization.

Opus Dei responded positively to the motu proprio, writing that “[w]ith the progressive maturation and assimilation of the Council’s teachings on the hierarchical and charismatic gifts, it will become increasingly clear that, far from being in opposition to each other, in Opus Dei they are complementary realities.”

Opinions have been divided about the motu proprio’s intended effect upon Opus Dei. Eric Sammons of Crisis Magazine observed that “having it not led by a bishop will likely further the pope’s goal of centralization of the Church around the Vatican. Now OD [Opus Dei] will need to contact Rome for any episcopal tasks.”

The argument was always “If Opus Dei has a bishop, why can’t the Traditional orders like FSSP or ICK have a bishop?” Francis is fearful that groups with a bishop on top have “break-away powers” like Abp. Lefebvre (not that Opus Dei would break away – they are tight with Francis). https://t.co/4TDAC135Br

Deacon Nick Donnelly suggested that the motu proprio was an attack from Francis. “Their reward for papal sycophancy,” he added. “Does this mean that Opus Dei is now vulnerable to interference by bishops outside the prelature?”

Iconographer and blogger Hilary White also suggested that the motu proprio was something of a punishment for the group. “Now he’s gutting Opus Dei. No more personal prelature for you, bad kids!”

However, not all are of the opinion that the motu proprio is intended as a punitive measure. Indeed, Opus Dei is somewhat different from other groups – particularly traditional orders which have been the recipient of recent papal restrictions – being noted more for its “exaggerated loyalty” to the Pope than for any criticism of him.

READ: Opus Dei have an ‘indirect complicity with the destructive course’ of Pope Francis: psychologist

In recent years, LifeSiteNews has been constantly reporting on doctrinal and moral irregularities which are present in Opus Dei’s ranks.

In 2017, Monsignor Mariano Fazio, the group’s Vicar General and second in common, accused signatories of the filial correction correcting Pope Francis for his “effectively upheld 7 heretical positions,” of launching an “attack [on] the pope.”

In 2021, the Swiss bishop and member of Opus Dei Bishop Joseph Bonnemain declared he supported same-sex “marriage” and that he has “nothing against” it.

Speaking to LifeSite’s Maike Hickson shortly after, Dr. Gerard van den Aardweg, a Dutch psychologist and expert on questions of homosexuality, rebuked Opus Dei for remaining silent in the face of Pope Francis’ own support of civil unions.

Dr. van den Aardweg suggested that Opus Dei’s treatment of the priest “seems to indicate that his superiors, very probably in line with the leadership in Rome, reject criticism of the Pope.”

He accused Opus Dei leadership of an “unwillingness to accept justified criticism of the Pope” which “indicates indirect complicity with the destructive course of this Pope with respect to an essential point of morality.”