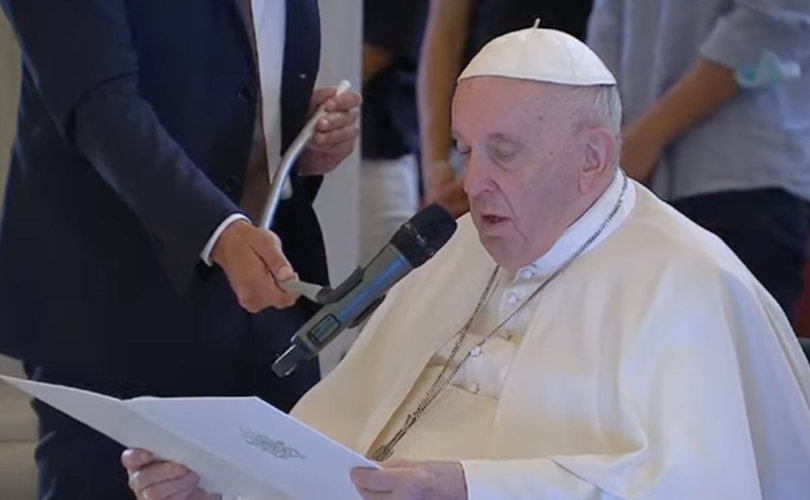 Pope Francis during the global rosary for peace, May 31, 2022, in the Basilica of St. Mary Major.Vatican News

VATICAN CITY (LifeSiteNews) – Pope Francis has attacked “traditionalists” in the Church, saying that the “current problem in the Church is precisely the non-acceptance of the [Second Vatican] council.”

In a wide-ranging interview with Jesuit magazines held on May 19, but published June 14, Pope Francis spoke on the role of the Jesuit order in the Church today and the Russia-Ukraine war, but chiefly attacked “restorationism,” which he said had “come to gag the Council.”

Referring to the Second Vatican Council as the point from which to base evangelization efforts, Francis said that “it is very difficult to see spiritual renewal using old-fashioned criteria.” Instead of such “old-fashioned” methods, he praised the “movements, groups, new bishops who remember that there is a Council behind them.”

“Because the Council that some pastors remember best is that of Trent,” Francis complained.

“Restorationism has come to gag the Council,” he said, before addressing the American Church in particular. “The number of groups of ‘restorers’ – for example, in the United States there are many – is significant.”

Francis mentioned an un-named Argentine bishop who told the Pope “he had been asked to administer a diocese that had fallen into the hands of these ‘restorers’,” saying that “they had never accepted the Council.”

Pope Francis critiqued the “ideas, behaviors” which came from the groups of “restorers,” advising the assembled Jesuits that the Council must be more heavily promoted in order to be accepted:

There are ideas, behaviors that arise from a restorationism that basically did not accept the Council. The problem is precisely this: in some contexts the Council has not yet been accepted. It is also true that it takes a century for a Council to take root. We still have forty years to make it take root, then!

‘Traditionalists’ are making trouble in the Church

Pope Francis cited the account of progressive Jesuit Superior General Pedro Arrupe, who led the Jesuits from 1965 – 1983 and was instrumental in promoting the “spirit” of the Second Vatican Council in the order despite opposition from what Francis called a “conservative reaction” against the “prophetic voice of Arrupe” from other Jesuits.

“Today for us that General is a saint, but he had to endure many attacks,” said Francis, who recounted the example of the Jesuit father in order to tell the assembled Jesuit editors “what the post-conciliar period was like” with regard to pushback from “conservatives” against progressives promoting the post-Conciliar teaching.

“This is happening again, especially with the traditionalists,” said Francis. “That is why it is important to save these figures who defended the Council and fidelity to the pope.”

— Article continues below Petition —
Pope Francis: Don't make Bishop McElroy a cardinal - he knew about McCarrick
Show Petition Text
12644 have signed the petition.
Let's get to 15000!
Thank you for signing this petition!
Add your signature:
Show Petition Text

At the close of his meeting with the Jesuit magazine editors, Pope Francis repeated his open attack on traditionalists, saying: “Sorry if I went on too long, but I wanted to underline the post-Council and Arrupe issues because the current problem of the Church is precisely the non-acceptance of the Council.”

The Pope’s newly-released interview comes days after he criticized the Sicilian bishops for their use of “grandma’s lace” in the liturgy, since it is “sixty years after the Council.”

“It’s good to pay homage to grandma, but it’s better to celebrate mother, holy mother Church, and how mother Church wants to be celebrated,” he said. “Let insularity not prevent the true liturgical reform that the Council sent forward,” he added, doubling down.

In comments to LifeSiteNews, U.K. author and catechist Deacon Nick Donnelly responded to the Pope’s remarks, saying that “Traditionalist Catholics are faithful to the true Council, not to the heterodox ‘spirit of the council’ that has been foisted on the Church, especially by the Jesuits.”

Deacon Donnelly wrote that “traditional Catholics uphold the importance Latin and Gregorian Chant to the worship of God (SC 36 & 116); we teach the truth that there is no salvation outside the Catholic Church (LG 14); we warn that atheism is an evil that must be rejected ‘root and branch’ (GS 21), we defend the sacrament of marriage from the plague of divorce and cohabitation (GS 47).”

Comparing this to the pontiff’s own actions, Donnelly added that “Pope Francis can’t say the same with his antipathy towards Latin, his religious indifferentism, his enthusiasm towards atheism, his acceptance of divorce and cohabitation. Before talking about fidelity to the Council, he needs to look in the mirror.”

Liturgical scholar Matthew Hazell also expressed concern over the pope’s interview, writing “Vatican II will be *made* to take root, no matter how much pastoral damage it causes!”

1. Ugh.
2. What does it mean to “accept” a pastoral Council? This has never been properly explained. 🤷
3. We’re going to keep doubling down on our failures: Vatican II will be *made* to take root, no matter how much pastoral damage it causes! (see TC)

While attacking “traditionalists,” Pope Francis appeared to shy away from supporting Germany’s Synodal Way, which a number of cardinals and bishops have warned is leading to “schism.”

Father Stefan Kiechle of Stimmen der Zeit from Germany asked Pope Francis about the Germany Synodal Way, which he said that while “some think is heretical … in reality it is very close to real life.” Francis replied by saying that he had told Bishop Georg Bätzing, president of the German Bishops’ Conference, that “In Germany there is a very good Evangelical Church. We don’t need two.”

Francis also referenced the Diocese of Cologne, the subject of recent controversy over Cardinal Rainer Woellki’s handling of sex abuse reports. He compared the “conflict” in the diocese to alleged “conflict” in the Diocese of Arecibo in Puerto Rico, whose popular, conservative bishop was recently dismissed by the Holy See, likely due to his opposition to COVID-19 injection mandates.

“I can think of one where the conflict has not yet ended: Arecibo in Puerto Rico, has been in conflict for years,” he said. “There are many dioceses like that.”

The 85-year-old Pontiff also repeated his analysis of the Russia-Ukraine war which he first made in a May 3 interview with Corriere Della Sera. Recalling the words of an un-named head of state, Francis said that NATO was “barking at the gates of Russia. They do not understand that the Russians are imperialists and will allow no foreign power to approach them.”

Mentioning the global arms trade, Francis added that “we do not see the whole drama unfolding behind this war, which was perhaps somehow either provoked or not prevented.”