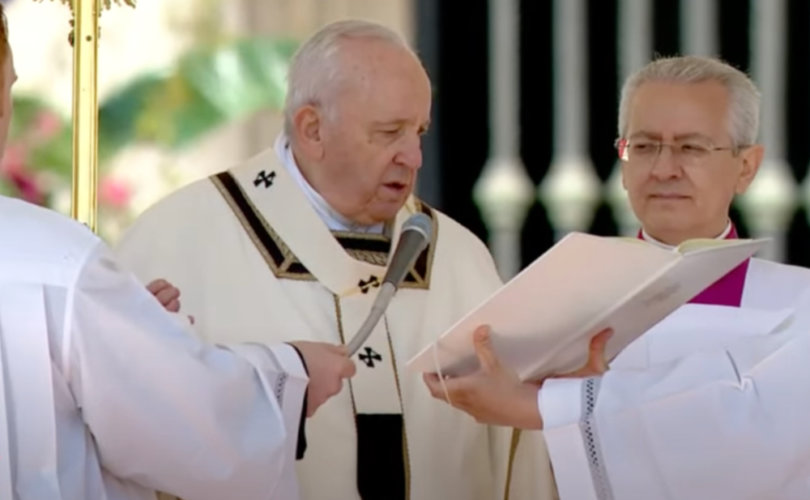 VATICAN CITY (LifeSiteNews) – Pope Francis cancelled all engagements today due to a “necessary medical check up,” the Vatican announced.

In a statement released to media outlets Friday, April 22, the director of the Holy See Press Office Matteo Bruni said: “The pope has slowed down his activity today due to a necessary medical check-up. Therefore, he does not have any appointments on his agenda today.”

Bruni added that medical appointments were taking place in the Vatican’s own facilities, not in any external hospital.

Pope Francis has been visibly beset with health problems in recent months, particularly sciatica and knee issues, with his mobility becoming increasingly difficult. This has resulted in his taking a more reduced role in liturgical and official ceremonies of late.

This has been particularly notable during the recent Holy Week and Easter ceremonies, when Pope Francis often sat during occasions in the liturgy when he should have been standing or kneeling.

Footage from the Pope’s adoration of the Cross on Good Friday also shows him struggling to walk the few paces to reach the cross.

On February 25, the Pontiff notably canceled his planned February 27 trip to Florence due to “acute gonalgia” which also prevented him from presiding over the Ash Wednesday liturgies. Francis had been due to meet with the Mediterranean bishops and mayors, including the Mayors of Jerusalem and Istanbul.

Speaking to reporters on the way back from his brief visit to Malta in early April, Francis said that his sciatica “creates problems for me to walk.” When leaving Rome for Malta, Francis, for the first time, had to resort to using a lift to get into the plane, instead of climbing the stairs. “My health is a bit capricious,” he said.

In an interview with Argentinian paper La Nacion, released April 22, the 85-year-old Pontiff again referenced his health, saying that “at this age one must be satisfied with being told that he is well preserved.”

Rumors and speculation about the true extent of the Pope’s health issues have been growing ever since Francis underwent colon surgery on July 4, 2021. In a note issued at the time, Bruni wrote that the 3-hour surgery was “scheduled,” and was “for a symptomatic diverticular stenosis of the colon.”

Francis was discharged July 14 and returned to the Vatican after his 10-day stay in hospital.

Prominent, dissident Jesuit, Father Thomas Reese, wrote at the time that the surgery marked a turning point in Francis’ pontificate. “But even with the best prognosis, age is catching up to Francis. Barring a miracle, he will only be expected to continue as pope for five or six years,” wrote Reese. “We may look back at his hospitalization as the moment that marked the beginning of the end of his papacy.”

As rumors abound about the Pope’s health, questions have begun to spread regarding the next conclave and a future Pope. Vatican journalist Sandro Magister recently published a memorandum which was reportedly circulating Vatican City since the start of Lent, discussing the problems of the Church under Francis and “the next conclave.”

However, such speculation aside, the Pontiff’s plans for the upcoming months include a number of foreign travels, aside from the normal daily operations at the Vatican. He is due to visit Lebanon in June; Congo and South Sudan in early July; possibly due to visit Canada in late July; and he will attend an inter-religious meeting in Kazhakstan in September.