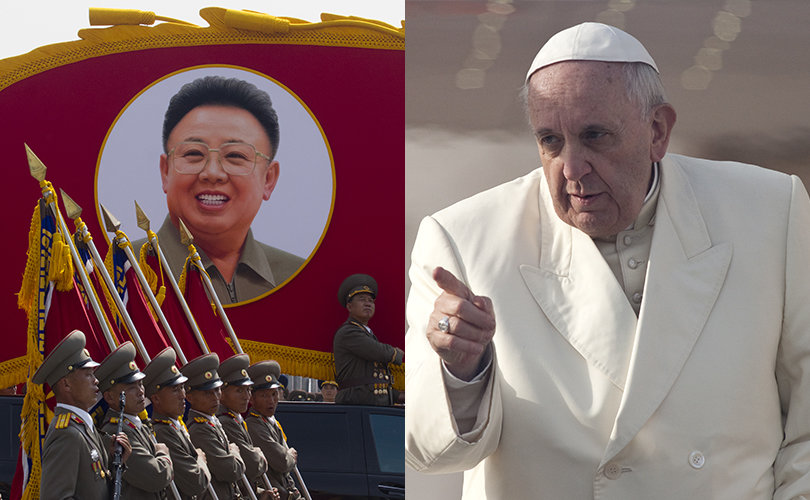 July 14, 2017 (LifeSiteNews) – Pope Francis has given another interview to Italian journalist Eugenio Scalfari, this time in which he compared the United States to North Korea, suggesting both are part of alliances with a “distorted view of the world.”

“I worry about very dangerous alliances between powers which have a distorted vision of the world: America and Russia, China and North Korea, (Russian President Vladimir) Putin and (Syria’s Bashar al-) Assad over the war in Syria,” said Pope Francis. The international news agency AFP translated his remarks to Scalfari, which were published in La Repubblica.

“The danger concerns immigration,” he said. “Our main and unfortunately growing problem in the world today is that of the poor, the weak, the excluded, which includes migrants.” Some countries “fear an invasion of migrants.”

Pope Francis was speaking about the recent G20 summit during which heads of the world's wealthiest countries meet. He has given a number of controversial interviews to Scalfari before. The 93-year-old left-leaning journalist who campaigned for divorce and abortion in Italy admits doesn't take notes of his interviews. Nevertheless, Pope Francis has continued to give him interviews – and the Vatican has published some on the Vatican website as official (and then took them down).

In a letter to the leaders of the G20 summit, Pope Francis said four principles for them to embrace are “time is greater than space; unity prevails over conflict; realities are more important than ideas; and the whole is greater than the part.”

“This tension between space and time, between limit and fullness, requires an exactly contrary movement in the minds of government leaders and the powerful,” he wrote. “An effective solution, necessarily spread over time, will be possible only if the final objective of the process is clearly present in its planning. In the minds and hearts of government leaders, and at every phase of the enactment of political measures, there is a need to give absolute priority to the poor, refugees, the suffering, evacuees and the excluded, without distinction of nation, race, religion or culture, and to reject armed conflicts.”

The pope's letter did not mention pre-born children or abortion.

Something the U.S. and North Korea have in common is both are among the seven countries in the world with the most permissive abortion laws.