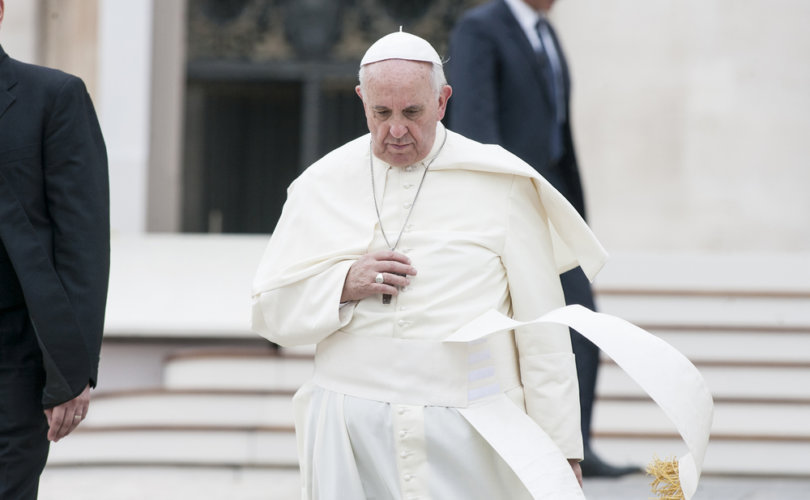 Much of the debate over the document will likely focus on Pope Francis’ treatment of the question of whether the Church can admit divorced and remarried Catholics to the sacraments. The furor over the so-called 'Kasper proposal' to loosen the Church's restrictions had dominated the headlines and discussions during last year's Synod on the Family. In today's exhortation, the pope stakes out a markedly more liberal position on the issue than his precedessors. (Read about that here.)

However, on numerous other hot-button issues, the Pope upholds the traditional teaching, including on abortion, euthanasia, gender theory, gay ‘marriage,’ and more.  The Catholic lay group Voice of the Family has pointed out that even on some of these issues his statements stray from traditional formulations in troubling ways. (Read their analysis here.) Nevertheless, the many liberals who would claim Pope Francis for their side in the controversial moral battles of our day have to contend with the fact that he is explicitly denouncing their views.

Here are some highlights of his statements on such issues.

Hopes in some circles that the Pope would radically alter the Church’s teachings on homosexuality have not been realized. The pope devotes very little space at all to the issue. Much of what he does write amounts to a relatively straight-forward, if not especially aggressive, re-affirmation of Church teaching, although there is possibly the hint of a laxer approach to civil unions than that taken by his precedessors.

The pope first addresses the issue in paragraph 52, writing: “We need to acknowledge the great variety of family situations that can offer a certain stability, but de facto or same-sex unions, for example, may not simply be equated with marriage. No union that is temporary or closed to the transmission of life can ensure the future of society.”

Voice of the Family today expressed concerns about the implication that same-sex civil unions could be included among the “great variety of family situations” and at the positive reference to the “stability” that such unions can offer.

However they also praised the clear affirmation of Church teaching in paragraph 251, which states: “There are absolutely no grounds for considering homosexual unions to be in any way similar or even remotely analogous to God’s plan for marriage and family.”

Te pope adds: “It is unacceptable ‘that local Churches should be subjected to pressure in this matter and that international bodies should make financial aid to poor countries dependent on the introduction of laws to establish ‘marriage’ between persons of the same sex’.”

In paragraph 250, the pope quotes the Catechism of the Catholic Church that “every sign of unjust discrimination” based upon sexual orientation is to “be carefully avoided, particularly any form of aggression and violence.”

Those with a homosexual orientation, he says, “can receive the assistance they need to understand and fully carry out God’s will in their lives.”

At the same time, the Pope notably avoids using any of the stronger language used in the Catechism or other Church documents in reference to homosexuality – particularly the “intrinsically disordered” language that was subject to scrutiny by some Synod fathers at last fall’s Synod on the Family.

Throughout his pontificate the Pope has repeatedly and forcefully condemned so-called “gender ideology” – the radical theory that dismisses intrinsic differences between men and women, and makes gender a fluid reality, subject even to personal choice.

The Pope renews his criticism of gender theory in today's exhortation.

“Yet another challenge is posed by the various forms of an ideology of gender that ‘denies the difference and reciprocity in nature of a man and a woman and envisages a society without sexual differences, thereby eliminating the anthropological basis of the family,’” he writes. “This ideology leads to educational programmes and legislative enactments that promote a personal identity and emotional intimacy radically separated from the biological difference between male and female. Consequently, human identity becomes the choice of the individual, one which can also change over time.”

“It is a source of concern that some ideologies of this sort, which seek to respond to what are at times understandable aspirations, manage to assert themselves as absolute and unquestionable, even dictating how children should be raised. It needs to be emphasized that “biological sex and the socio-cultural role of sex (gender) can be distinguished but not separated”.

In a succinct treatment in paragraph 56, the pope reiterates Church teaching against artificial reproductive technologies.

“On the other hand,” he writes, “‘the technological revolution in the field of human procreation has introduced the ability to manipulate the reproductive act, making it independent of the sexual relationship between a man and a woman. In this way, human life and parenthood have become modular and separable realities, subject mainly to the wishes of individuals or couples’.”

“It is one thing to be understanding of human weakness and the complexities of life, and another to accept ideologies that attempt to sunder what are inseparable aspects of reality. Let us not fall into the sin of trying to replace the Creator. We are creatures, and not omnipotent. Creation is prior to us and must be received as a gift.”

The pope speaks about abortion in paragraph 83.  “Here I feel it urgent to state that, if the family is the sanctuary of life, the place where life is conceived and cared for, it is a horrendous contradiction when it becomes a place where life is rejected and destroyed,” he said.

“So great is the value of a human life, and so inalienable the right to life of an innocent child growing in the mother’s womb, that no alleged right to one’s own body can justify a decision to terminate that life, which is an end in itself and which can never be considered the “property” of another human being.”

On euthanasia he writes, “The family protects human life in all its stages, including its last. Consequently, ‘those who work in healthcare facilities are reminded of the moral duty of conscientious objection. Similarly, the Church not only feels the urgency to assert the right to a natural death, without aggressive treatment and euthanasia’.”

In paragraph 42 he addresses aggressive population control, imposed by states. “The upright consciences of spouses who have been generous in transmitting life may lead them, for sufficiently serious reasons, to limit the number of their children,” he writes, “yet precisely ‘for the sake of this dignity of conscience, the Church strongly rejects the forced State intervention in favour of contraception, sterilization and even abortion.’ Such measures are unacceptable even in places with high birth rates, yet also in countries with disturbingly low birth rates we see politicians encouraging them.”

The pope reaffirms the value of adoption, including as a solution to cases of unintended pregnancy that might otherwise end in abortion. “Adopting a child is an act of love, offering the gift of a family to someone who has none. It is important to insist that legislation help facilitate the adoption process, above all in the case of unwanted children, in order to prevent their abortion or abandonment.”

In Humanae Vitae, Pope Francis writes, Pope Paul VI “brought out the intrinsic bond between conjugal love and the generation of life: ‘Married love requires of husband and wife the full awareness of their obligations in the matter of responsible parenthood, which today, rightly enough, is much insisted upon, but which at the same time must be rightly understood.”

In paragraph 80, he affirms that “the conjugal union is ordered to procreation ‘by its very nature’.”

“The child who is born ‘does not come from outside as something added on to the mutual love of the spouses, but springs from the very heart of that mutual giving, as its fruit and fulfillment,’” he adds. “He or she does not appear at the end of a process, but is present from the beginning of love as an essential feature, one that cannot be denied without disfiguring that love itself.”

“From the outset, love refuses every impulse to close in on itself; it is open to a fruitfulness that draws it beyond itself. Hence no genital act of husband and wife can refuse this meaning, even when for various reasons it may not always in fact beget a new life.”

He returns to the theme in paragraph 82, quoting the final relatio from the Synod on the Family: “The Church’s teaching is meant to ‘help couples to experience in a complete, harmonious and conscious way their communion as husband and wife, together with their responsibility for procreating life. We need to return to the message of the Encyclical Humanae Vitae of Blessed Pope Paul VI, which highlights the need to respect the dignity of the person in morally assessing methods of regulating birth… The choice of adoption or foster parenting can also express that fruitfulness which is a characteristic of married life.”