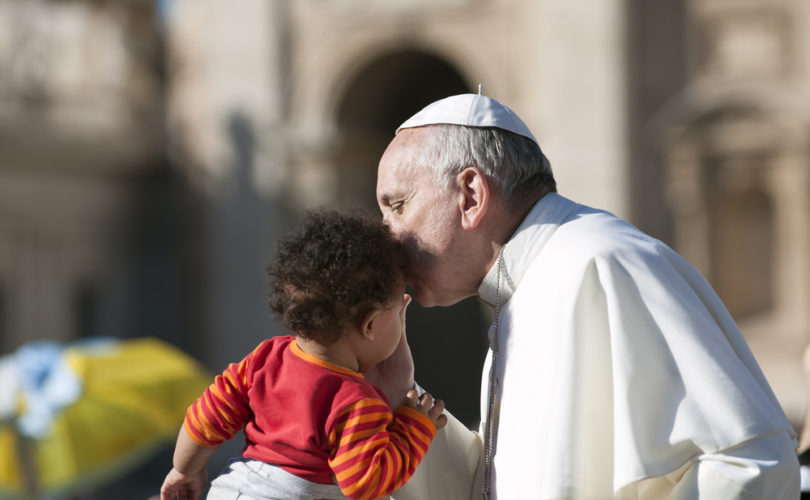 NAPLES, Italy, March 23, 2015 (LifeSiteNews.com) — For at least the third time in his pontificate Pope Francis has used very strong language to condemn the gender theory, one of the intellectual underpinnings of the ‘LGBT’ agenda. Speaking Sunday with young people on his voyage to Naples, Italy, Pope Francis spoke of the “ideological colonization” of families seen throughout Europe and the West.

“Gender theory is an error of the human mind that leads to so much confusion,” he said. “So the family is under attack.” As to how to deal with the “secularization” or the “ideological colonization,” the pope said he does not have the answer. He pointed however to the Synod on the Family, which he called inspired by the Lord.

The comments echo those made in an in-flight interview Pope Francis gave while returning from Manila in the Philippines on January 19, 2015. Francis lamented the Western practice of imposing a homosexual agenda on other nations through foreign aid, which he called a form of “ideological colonization” and compared it to the Nazi propaganda machine.

Asked by a reporter to explain the phrase “ideological colonization,” the pope gave an example from 1995 when, he says, a minister of education in a poor area was told she could have a loan for building schools so long as the schools used a book that taught “gender theory.”

The first comments from Francis along these lines were in an October 2014 interview that was only published in January 2015 in the book “Papa Francesco: questa economia uccide” (‘Pope Francis: this economy kills’).

In it the pope speaks of modern-day “Herods” that “destroy, that plot designs of death, that disfigure the face of man and woman, destroying creation.” Giving examples of these, he says: “Let's think of the nuclear arms, of the possibility to annihilate in a few instants a very high number of human beings. Let's think also of genetic manipulation, of the manipulation of life, or of the gender theory, that does not recognize the order of creation.”

“With this attitude, man commits a new sin, that against God the Creator. … God has placed man and woman and the summit of creation and has entrusted them with the earth. … The design of the Creator is written in nature.”

Pope Francis’ condemnations of gender theory follow in the footsteps of Pope Benedict XVI who explained the “profound falsehood” of gender theory and the “anthropological revolution contained within it.”

Benedict described the gender theory as people disputing “the idea that they have a nature, given by their bodily identity, that serves as a defining element of the human being.” Rather than acknowledging that God created people male and female, the theory contends that these are societal constructs and we now may decide for ourselves.

“When the freedom to be creative becomes the freedom to create oneself, then necessarily the Maker himself is denied and ultimately man too is stripped of his dignity as a creature of God, as the image of God at the core of his being,” Benedict concluded. “The defence of the family is about man himself. And it becomes clear that when God is denied, human dignity also disappears.”