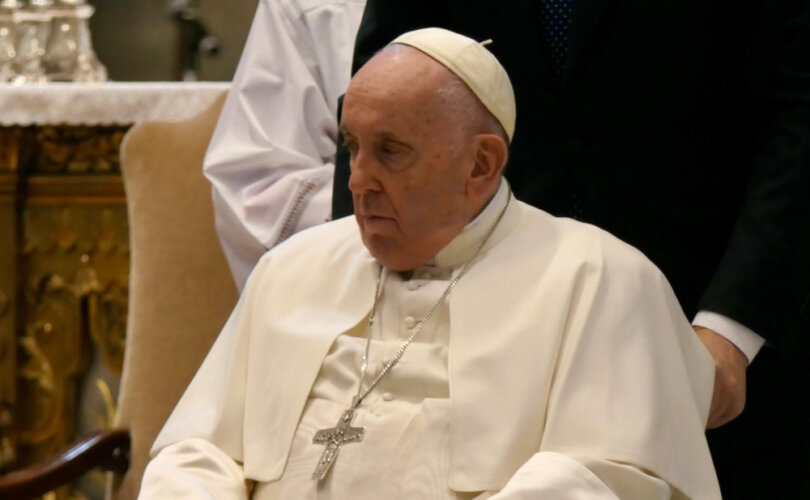 Pope Francis is wheeled out of St. Peter's after Cdl. Pell's funeralMichael Haynes/LifeSiteNews

VATICAN CITY (LifeSiteNews) — Pope Francis has once again condemned Catholic efforts of evangelization, stating that “Catholicism is not proselytism,” while adding he has “no explanation” for the drop in vocations in recent decades.

The Pontiff made the comments in an interview he gave to Spanish language news outlet Mundo Negro back in mid-December, which was published on January 13.

He made the statement while fielding a question about the Second Vatican Council, having been asked whether the Church’s “mission” had changed since the Council and if “the Church and the people need another Mission.”

“Thank God, yes,” replied Francis. “Historians say that it takes 100 years for a council to have a complete result, so it is halfway there. So many things have changed in the Church, so many things for the better…”

The 86-year-old Pope referenced what he described as “two interesting signs.” Firstly he stated that the “first imprudent effervescences of the Council have already disappeared,” clarifying that he was referring to “liturgical effervescences.” His second suggestion that the Council was having an effect on the Church was that “anti-conciliar resistances are emerging, resistances that were not seen before, something typical of every process of maturity.”

Francis welcomed changes which he attributed to the Council, such as an increased “respect for cultures” and the “inculturation of the Gospel” – things which were an “indirect consequence of the Council.”

Highlighting this “evangelization of culture,” Francis expanded by saying that he was talking of “evangelizing, of announcing, and nothing more, with much respect.”

Consequently, he argued that “proselytism” was the “most serious sin that a missionary can have.”

Therefore, the most serious sin that a missionary can have is proselytism. Catholicism is not proselytism.

‘No explanation’ for drop in vocations

Devotees of the Church’s Tradition and of the traditional Mass regularly point to such remarks and policies as exemplary of the crisis afflicting the Church, as seen notably in the drop in vocations. Pope Francis noted the drop of vocations:

Five places: Belgium, Holland, Spain, Ireland and Quebec filled the world with missionaries. Today, these five places have no vocations. It is a mystery: and in less than 100 years. How do we explain this to each other? I see no explanation.

However, when questioned, he expressed no concern for this, stating that it was merely a crisis which “must be experienced and overcome.”

No, I am not concerned in the sense that we are merging, it is a sign of the times that indicates worldliness, that indicates a level of development that puts values elsewhere. This signals crises, there are crises, and crises must be experienced and overcome.

This is by no means the first time that Pope Francis has decried “proselytism”: it has been one of the more consistent themes of his nearly 10-year pontificate. In the first year of his papacy, in an October 2013 interview with La Repubblica, he said, “Proselytism is solemn nonsense, it makes no sense … I believe in God, not in a Catholic God, there is no Catholic God, there is God and I believe in Jesus Christ, his incarnation.”

He has often repeated such argumentation, promoting ecumenical efforts instead of the vocation of Catholics to evangelize. In 2016 he famously rebuked a young Lutheran girl who asked him for advice about how to deal with her non-church-going friends.

Pope Francis answered that the “last thing” the girl has to do is to “speak.” He urged her to, “live like a Christian, like a Christian girl: chosen, forgiven, and on a path.” Then he argued ambiguously: “It is not licit that you convince them of your faith; proselytism is the strongest poison against the ecumenical path.”

READ: Pope Francis tells teens they’re not a ‘disciple of Jesus’ if they try to convert non-believers

Only weeks before he had warned Catholics away from evangelizing efforts, saying that it is a “very grave sin against ecumenism” for Catholics to try to convert Orthodox Christians. Francis stated:

But what should I do with a friend, neighbor, an Orthodox person? Be open, be a friend. ‘But should I make efforts to convert him or her?’ There is a very grave sin against ecumenism: proselytism. We should never proselytize the Orthodox! They are our brothers and sisters, disciples of Jesus Christ.”

His rejection of evangelization efforts have become accentuated in light of the 2019 Abu Dhabi document, and subsequent ecumenical meetings with Muslim leaders.

Catholic teaching on spreading the faith

Despite Pope Francis’ repeated statements, the tradition of the Church says otherwise regarding his condemnation of evangelization. In his 1888 encyclical Libertas, Pope Leo XIII outlined the Catholic Church’s relation with different religions. Leo XIII firmly warned against any promotion of other religions as somehow on a par with Catholicism:

One thing, however, remains always true — that the liberty which is claimed for all to do all things is not, as We have often said, of itself desirable, inasmuch as it is contrary to reason that error and truth should have equal rights.

Leo repeated this when he wrote in his 1896 encyclical Satis cognitum that everyone should become a child of God by taking “Christ Jesus as their Brother, and at the same time the Church as their mother.”

This was similarly taught by Pope Pius XII in his 1928 encyclical Mortalium animos. Explaining why Catholics were prohibited from participating in non-Catholic “assemblies,” Pius XII wrote:

Indeed, Pope Benedict XVI affirmed this teaching in a 2010 address, in which he stated: “The witness of charity, practised here in a special way, is part of the Church’s mission, together with the proclamation of the truth of the Gospel.”