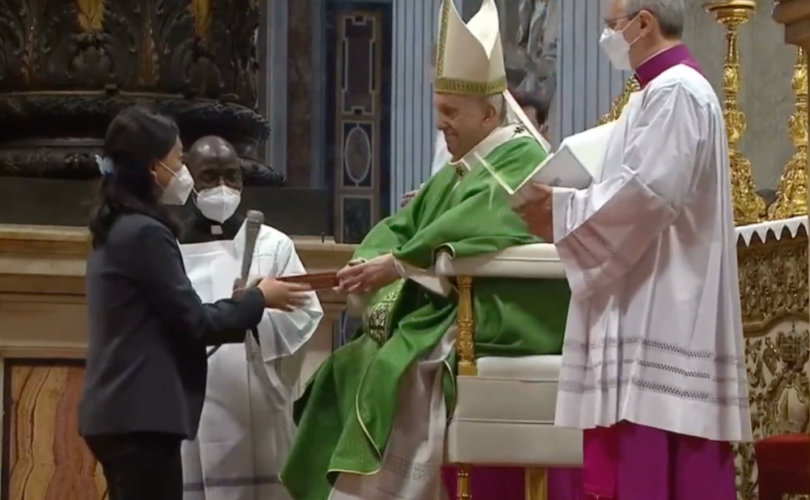 VATICAN CITY (LifeSiteNews) — Pope Francis has for the first time officially appointed women to the liturgical ministries of catechist and lector during a ceremony in the Vatican, in what has been described as a continuation of Vatican II’s “creative work,” and a “heretical attack” on the priesthood.

The ministries of lector and acolyte have been traditionally reserved to men and were stepping stones on the way to the priesthood before the liturgical upheavals of the Second Vatican Council.

But under Pope Francis’ January 2021 motu proprio “Spiritus Domini,” Canon Law was changed to allow the liturgical institution of female lectors and acolytes, both of which are minor orders. This was followed by the May 10 apostolic letter “Antiquum ministerium,” which further drew on texts from Vatican II to establish the lay ministry of catechist for both men and women.

On Sunday — the Sunday of the Word of God, as Francis started calling it in 2019 — the women installed in the ministries of lectors and catechists were told by Pope Francis that they were “called to the important work of serving the Gospel of Jesus, of proclaiming him, so that his consolation, his joy and his liberation can reach everyone.”

Pope Francis gave the lectors a Bible and the catechists a crucifix, pronouncing the words, “May your ministry always be rooted in a profound life of prayer, built on sound doctrine and animated by true apostolic enthusiasm.”

The pontiff also used his homily to warn the new lectors and catechists about his regular topic of “rigidity,” calling it a “perversion” and a “modern pelagianism.”

“Whenever we think that finding God means becoming more rigid, with more rules, right things, clear things … it is not the way,” he said. “When we see proposals of rigidity, let us think immediately: this is an idol, it is not God. Our God is not that way.”

Men and women from South Korea, Pakistan, Ghana, and Italy were installed as Lectors, while laity from Peru, Brazil, Ghana, Poland, Spain, and Italy were made catechists.

While women have regularly taken public, liturgical roles in the Novus Ordo, such actions have not previously been supported by any official installation. The revolutionary nature of Sunday’s ceremonies was noted by Jesuit Fr. John Baldovin, professor of historical and liturgical theology at Boston College’s School of Theology and Ministry, who highlighted the significance of installing women in such ministries.

“Making them official says something very important about the nature of ministry in the Catholic Church today,” he said.

The Pontifical Council for Promoting the New Evangelization also defended Pope Francis’ move, saying that he was building on a “well-established practice in the Church,” which had “confirmed that lay ministries, founded on the sacrament of Baptism, can be entrusted to all the faithful who are suitable, whether male or female, according to what is already implicitly indicated by canon 230 of the Code of Canon Law, which the Pope has modified for the occasion.”

A ‘heretical attack’ on the priesthood

But Deacon Nick Donnelly told LifeSiteNews that such a development under Pope Francis was a “heretical attack” on the priesthood.

“Pope Francis’ commissioning of women as lectors might appear unexceptional as women have been proclaiming Sacred Scripture at Mass for decades. However, formally instituting women into the ministry of lector in the context of the Mass is altogether a different matter,” noted Donnelly.

He observed that “from the earliest days of the Church the ministry of Lector, and the ministry of acolyte,  has been intimately associated with the service of the divine liturgy, and service of the sacred ministers of the liturgy — deacons, priests and bishops. Since the days of the apostles such ministry has been reserved to men, reflecting Christ’s explicit choice of men as apostles. The close association of lector with the diaconate and presbyterate is reflected in the fact that its reception remains a necessary requirement that candidates for Holy Orders receive these ministries.”

“In light of this,” added Donnelly, “the concern is that Pope Francis’ institution of women into the ministry of lectors is the first step towards abolishing the reservation of Holy Orders to men. Ultimately, it is an heretical attack on Our Lord’s institution of the apostolic ministry.”

Writing shortly after the release of Spiritus Domini in 2021, liturgist and theologian Dr. Peter Kwasniewski warned that the Pope’s altering of Canon Law to push women through the liturgical ministries “fits snugly into this larger pattern of rupture from Catholic tradition.”

Calling it a “tectonic shift both in theology and in praxis,” Kwasniewski noted that the move is “intelligible only against the backdrop of the pervasive feminism that has equated the worth of women with their taking-on of roles traditionally reserved to men,” and as such would be used to further argue for women deacons and priests.

Kwasniewski recently wrote a book explaining and defending the traditional Catholic teaching on reserving the liturgical ministries to men only.