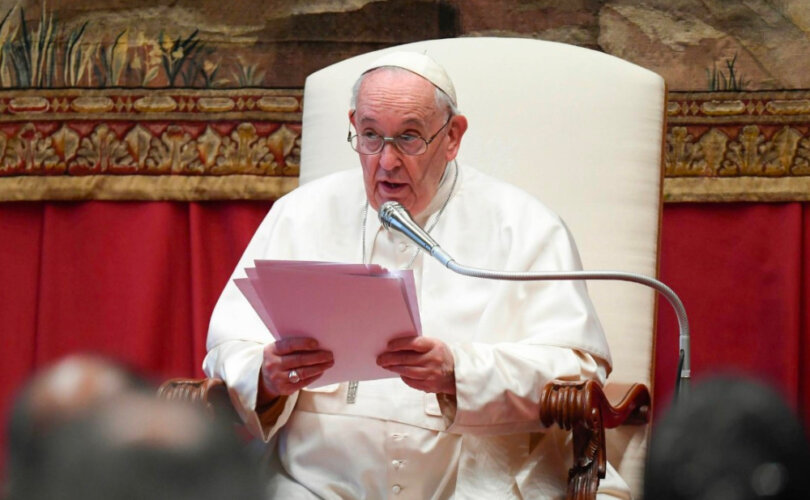 VATICAN CITY (LifeSiteNews) – Pope Francis has once again contradicted Catholic teaching regarding the permissibility of the death penalty, claiming that it is “always inadmissible since it attacks the inviolability and the dignity of the person.”

The 86-year-old Pontiff made the claim in his annual meeting with the diplomatic corps of ambassadors accredited to the Holy See, otherwise known as his state of the world address.

His lengthy speech was divided into sections, with his critique of the death penalty falling under the section entitled “peace in truth.”

Francis made his comments against the death penalty as part of his list of instances where the “right to life” was “threatened.” He stated:

The right to life is also threatened in those places where the death penalty continues to be imposed, as is the case in these days in Iran, following the recent demonstrations demanding greater respect for the dignity of women. The death penalty cannot be employed for a purported State justice, since it does not constitute a deterrent nor render justice to victims, but only fuels the thirst for vengeance.

Continuing, the Pontiff issued a direct call to abolish the death penalty, arguing that it is “always inadmissible since it attacks the inviolability and the dignity of the person.” Francis declared:

I appeal, then, for an end to the death penalty, which is always inadmissible since it attacks the inviolability and the dignity of the person, in the legislation of all the countries of the world. We cannot overlook the fact that, up until his or her very last moment, a person can repent and change.

He also made a comment condemning abortion, stating that the “defense of life” is currently “jeopardized … all too often even in the mother’s womb, through the promotion of an alleged ‘right to abortion’.”

Commenting on Francis’ remarks, Deacon Nick Donnelly noted that “by repeatedly declaring that the death penalty is ‘inadmissible’ Pope Francis is contradicting the commandment of God.”

Divine revelation makes it clear that murderers forfeit their right to life, “Whoever sheds the blood of man, by man shall his blood be shed” (Gen 9:6). Pope Francis has not only claimed authority greater than sacred Scripture and Tradition but has placed himself in the untenable position of claiming to be more moral and just than Almighty God.

Closing his comments provided to LifeSiteNews, Deacon Donnelly warned that “Catholics must be clear that Pope Francis has no authority to contradict divine revelation safeguarded by sacred Tradition.”

This is the personal opinion of Jorge Mario Bergoglio

As it contradicts sacred Scripture and Tradition it is not official papal magisterium https://t.co/uQKH2QgX5y

Dr. Peter Kwasniewski, who has written extensively on Pope Francis’ various statements against the death penalty, responded to the issue of such pronouncements, writing:

It’s important to see not only that Francis is wrong, but that he is dangerously wrong, on this subject…when the pope is wrong about something that touches on the judicial and criminal systems of hundreds of nations and on the foundations and ramifications of their God-given authority, one is dealing with a level of wrongness that threatens the good of political society—the common good that Aristotle and Aquinas describe as something divine.

This is by no mean the first time that Francis has declared the death penalty to be somehow against Catholic teaching. Francis previously made groundbreaking changes to Pope John Paul II’s and Cardinal Joseph Ratzinger’s catechism in 2018, declaring that the death penalty “is inadmissible because it is an attack on the inviolability and dignity of the person.”

However, in changing the text of the Catechism of the Catholic Church (CCC), scholars argued that Francis went against the consistent teaching of “Sacred Scripture, Sacred Tradition, and the Magisterium of the Church” which “for 2,000 years have upheld the intrinsic legitimacy of the death penalty for grave crimes against the common good of Church or State.”

READ: Pope’s change to Catechism contradicts natural law and the deposit of Faith

Less than a year later, Francis redoubled his personal attacks on the death penalty, sending a video message to the 7th World Congress Against the Death Penalty calling it “a serious violation of the right to life that every person has.”

He then repeated his claims only months ago, when in his August 2022 “Pope Video” project he claimed that “in the light of the Gospel, the death penalty is unacceptable.”

Pope Francis’s repeated arguments against the death penalty come in complete opposition to the writings, teaching, and statements of theologians, saints, and the magisterium throughout the history of the Church, as scholars – such as Edward Feser and Joseph Bessette, joint authors of By Man Shall His Blood Be Shed: A Catholic Defense of Capital Punishment – have extensively pointed out.

It is even against the words of Scripture, for in the book of Genesis capital punishment is permitted precisely because murder violates man’s dignity as being made in the image of God: “whosever shall shed man’s blood, his blood shall be shed: for man was made to the image of God.” (Gen 9:6)

This teaching is further proposed by St. Thomas Aquinas, who drew from Scripture himself to teach that the common good is protected, and justice preserved, by observing the death penalty. (Summa Theologiae, 2a 2ae, q64, a2 & a3).

— Article continues below Petition —
PETITION: We won't give any money to liberal bishops who attack the Faith
Show Petition Text
11738 have signed the petition.
Let's get to 12500!
Thank you for signing this petition!
Add your signature:
Show Petition Text

Avery Cardinal Dulles stated in 2004 that “the reversal of a doctrine as well established as the legitimacy of capital punishment would raise serious problems regarding the credibility of the magisterium … the previous teaching had been discarded, doubt would be cast on the current teaching as well.”

In the book-length interview Diane Montagna conducted with Bishop Athanasius Schneider – Christus Vincit: Christ’s Triumph over the Darkness of the Age – the bishop taught that:

Those who deny the death penalty in principle implicitly or explicitly absolutize the corporal and temporal life of man. They also deny to some extent the consequences of original sin. Those who deny the legitimacy of the death penalty also implicitly or explicitly deny the need and value of expiation and penance for sins, and especially for monstrous crimes still in this earthly life.