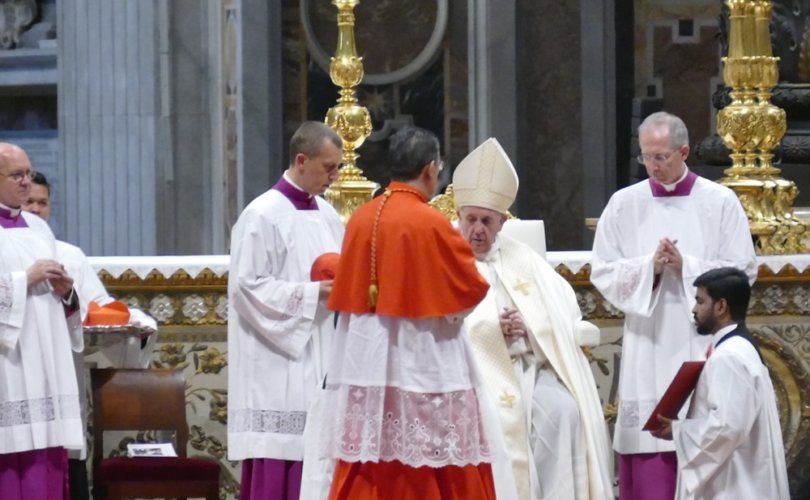 VATICAN CITY, October 7, 2019 (LifeSiteNews) ― Loud cheers greeted one of the 13 bishops elevated to the College of Cardinals on Saturday afternoon.

Fans of Fridolin Ambongo Besungu, 59, the Archbishop of Kinshasa, enlivened an otherwise solemn Consistory in which bishops from around the world received their red hats from Pope Francis.

Many Congolese women present at the ceremony wore colorful dresses emblazoned with Besungu’s image, and crowds cheered when the cardinal elect appeared in St. Peter’s Basilica.

When Besungu received his red hat, the Congolese among the congregation cheered again and waved flags vigorously ― even from a press box hovering over the assembled bishops.

Having attained the age of 80, Cardinals Fitzgerald, Dal Corso, and Tamkevicius are too old to vote in any future conclave.

The celebration, which was conducted partly in Latin, ended with the choir and congregation singing “Salve Regina.”

After the celebration in St. Peter’s, Pope Francis and the new cardinals took a bus to the Mater Ecclesia Monastery for a meeting with Pope Emeritus Benedict XVI. Vatican spokesman Matteo Bruni said that Benedict reminded the cardinals of the “value of fidelity to the Pope,” and then “together with Pope Francis,” gave them a blessing.

Pope Francis then went home to the Casa Santa Marta, and the new cardinals were taken to the Paul VI Hall and the Apostolic Palace for the “Courtesy Visits.” During these audiences, the press had the opportunity to greet and photograph the new cardinals before their guests arrived.

According to Vatican News, the choice of cardinals, eight of whom belong to religious orders, reflects the “missionary vocation of the Church.” However, it also seems to reflect Pope Francis’ interest in migration, Latin America, and interreligious dialogue with Islam.

Three of the new cardinals have critics wondering about their orthodoxy.

Cardinal Matteo Zuppi, the Archbishop of Bologna, is a well-known “street priest” well-liked for his support for the cause of migrants, the elderly, gypsies, and drug addicts, and the peacemaking Community of Sant’Egidio. News that Zuppi would be getting a red hat caused the Italian Left to cry, “We have a Cardinal!” Meanwhile,  Zuppi contributed an essay to the Italian edition of Fr. James Martin’s Building a Bridge: How the Catholic Church and the LGBT Community Can Enter into a Relationship of Respect, Compassion, and Sensitivity, a collaboration Fr. Martin has publicized.

However, according to Edward Pentin of the National Catholic Register, Archbishop Zuppi’s supporters have said “that his position is more nuanced than Father Martin has made it out to be … and that while the archbishop calls for a more sensitive pastoral approach in his foreword, he reasserts the Church’s teaching on the issue and calls faithfully Catholic outreach groups such as Courage ‘instructive.’”

Cardinal José Tolentino Calaça de Mendonça is an award-winning Portugese poet and essayist. He was appointed Vatican Archivist and Librarian to the Holy See by Pope Francis in 2018. But he too is a controversial figure, having written the introduction to a book on feminist theology by Benedictine Sister Maria Teresa Forcades. Labelled as “Europe’s most radical nun” by the BBC, Sister Forcades is known for promoting “queer theology” and supporting abortion and the morning-after pill.

Cardinal Miguel Ángel Ayuso Guixot belongs to the Comboni Missionaries of the Heart of Jesus. He is a renowed expert on Islam and was appointed President of the Pontifical Council for Interreligious Dialogue by Pope Francis this May.

Before his appointment as head of the pontifical council, Archbishop Guixot served as president of the Pontifical Institute for Arab and Islamic Studies in Rome. In this role, he was in charge of overseeing the dialogue between the Vatican and the prestigious Al-Azhar mosque and university in Egypt, considered the Vatican of the Sunni Islamic world. Archbishop Ayuso played a key role in drawing up the “Document on Human Fraternity for World Peace and Living Together” co-signed in early February by Pope Francis and Sheikh Ahmed el-Tayeb, grand imam of Al-Azhar, in Abu Dhabi.

The document has drawn considerable controversy for stating that the “diversity of religions” is “willed by God.” Despite Bishop Athanasius Schneider's appeal to Pope Francis to officially correct the text, last week, the Vatican announced that a “Higher Committee” had been established in the United Arab Emirates to implement the uncorrected document. Members of the seven-member (Catholic and Muslim) commission include Pope Francis’s personal secretary, Fr. Yoannis Lahzi Gaid, and Archbishop Ayuso Giuxot.

The other 10 cardinals have not rung the alarm bells of orthodoxy as loudly.

Cardinal Michael Czerny, SJ, came to Canada as a toddler from Communist-era Czechoslovakia. He is under-secretary of the Migrants and Refugees Section of the Dicastery for Promoting Integral Human Development. He was elevated to the episcopate by Pope Francis on October 4, one day before being created a cardinal.

Cardinal Michael Fitzgerald is an expert in Christian-Muslim relations, a former apostolic nuncio to Egypt, and also a former President of the Pontifical Council for Interreligious Dialogue.

Cardinal Álvero Ramazzini Imeri, Bishop of Huehuetenango, has been described as “dedicated to the poorest people” of Guatemala “for decades” and “to migrants and indigenous people in particular.” The Diocese of Huehuetenango covers almost 3,000 square miles is situated in Guatemala’s remote north-west.

Cardinal Cristóbal López Romero, S.D.B., Archbishop of Rabat, is a Salesian who worked and ministered in Paraguay for decades before moving to Morocco in 2003. During Pope Francis’ 2017 visit, he described his Morroccan archdiocese as multicultural, noting that it serves many migrants from farther south in Africa.

Cardinal Eugenio dal Corso belongs to the congregation of the Poor Servants of the Divine and ministered in both Argentina and Angola. In Angolo, Dal Corso served as the Provincial Superior of his order, then as Bishop of Saurimo and finally as Bishop of Benguela. He retired from the latter post at the age of 78.

Cardinal Ignatius Suharyo Hardjoatmodjo, the Archbishop of Jakarta, has spoken up for the rights of Indonesia’s Christian minority and is a member of the Congregation for the Evangelization of Peoples.

Cardinal Jean-Claude Hollerich, SJ, Archbishop of Luxembourg, is fervently pro-European Union and was elected president of the Commission of the Bishops' Conferences of the European Union (COMECE) in 2018.

Cardinal Juan de la Caridad García Rodríguez has been the Archbishop of Havana since 2016. He is on the Pontifical Council for Justice and Peace.

Cardinal Sigitas Tamkevicius is the Archbishop Emeritus of Kaunas, Lithuania. He was appointed by St. John Paul II in 1996. Persecuted by the Communist authorities in Cold War-era Lithuania, he was arrested in 1983 and sent to prison camps. In 1988 he was exiled to Siberia. He was allowed to return to Lithuania after the political softening that marked the perestroika period under Mikhail Gorbechev.

Cardinal Fridolin Ambongo Besungu has been the Bishop of Kinshasa since November 2018. He has spoken out boldly against political and police violence against Catholics and other pro-democracy protesters in the Democratic Republic of the Congo.