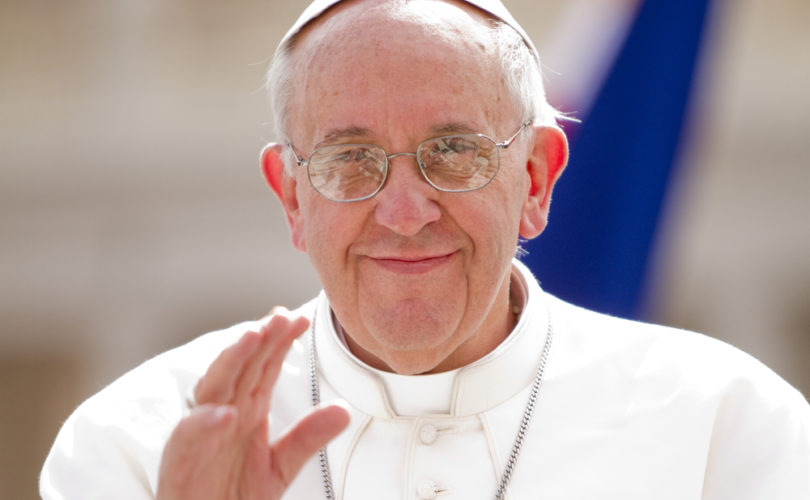 ROME, December 19, 2017 (LifeSiteNews) – Euthanasia has come to Italy, and both jubilant right-to-die activists and heartbroken Catholics are giving Pope Francis part of the credit. Moreover, the law does not provide doctors the right to refuse participation via conscientious objection.

According to Catholic doctrine, the withdrawal of nutrition and hydration is passive euthanasia.

The Italian end-of-life bill was first introduced thirty years ago, but was vigorously opposed at that time by pro-life politicians who blocked its passage by suggesting over three thousand amendments. However, on Wednesday the amendments were voted down, 180 to 71, with 6 abstentions.

The new legislation will be entered in the official record on the 40th anniversary of the passing of the Italian law allowing abortion.

Critics say the resistance of Catholic politicians to the bill was weakened after Pope Francis’ November speech to the Pontifical Academy for Life, in which he indicated that people may refuse life-prolonging medical treatment but failed to note that administration of nutrition and hydration are basic humanitarian care rather than medical treatment. According to Italy’s La Repubblica, and The New York Times, many of the bill’s supporters, and many Catholics, saw Francis’s speech as a “green light” to the new law.

“The words of Pope Francis on the end of life, on November 16 at the Pontifical Academy for Life, were interpreted by all as an ‘open door’ to the form of euthanasia that is the living will,” wrote Roberto di Mattei, Catholic historian and head of Italy’s Lepanto Foundation.

The Pope's words on the topic were necessary, wrote Corrado Augias in La Repubblica, “to overthrow the last resistance of some Catholics and–probably–to convince at least a group of them to give their consent to [the pro-euthanasia law].”

Right-to-die advocate Marco Cappato, a member of Italy’s far-left “Radical Party” praised Francis immediately after his Academy for Life address for placing the wishes of the sick person at the center of the controversy about medical care for the terminally ill. Francis, he thought, was on the side of the bill.

“That we lack a law giving the least respect to the rights of the sick person has been questioned now by the Pope, too,” he wrote at that time. “Who knows if the ‘more Catholic than the Pope’ clericalists in Parliament will ever take a moment to rethink their obstructionism …regarding the living will.”

In his speech to the Academy for Life, Pope Francis said: “(I)t is morally licit to decide not to adopt therapeutic measures, or to discontinue them, when their use does not meet that ethical and humanistic standard that would later be called ‘due proportion in the use of remedies’… It thus makes possible a decision that is morally qualified as withdrawal of “overzealous treatment.”

Pope Francis called for “discernment” when it came to prolonging life but without mentioning the crux of the issue, namely withdrawal of nutrition and hydration. His words seemed on all sides to indicate support for the Italian law.

“To determine whether a clinically appropriate medical intervention is actually proportionate, the mechanical application of a general rule is not sufficient,” the Pope said.

“There needs to be a careful discernment of the moral object, the attending circumstances, and the intentions of those involved,” he continued.

“The patient, first and foremost, has the right, obviously in dialogue with medical professionals, to evaluate a proposed treatment and to judge its actual proportionality in his or her concrete case, and necessarily refusing it if such proportionality is judged lacking,” he added.

De Mattei told LifeSiteNews that the Italian Bishops conference did not speak out against the legislation.

In an interview with La Repubblica, 86-year-old retired Cardinal Ruini, a former president of the Italian Episcopal Conference, mourned the passing of the bill. “This law,” he said, “opens the door to euthanasia, without naming it.”

“It’s a rather hypocritical method of proceeding, similar to that used to legitimate marriage between people of the same sex, without calling it marriage and talking of civil unions when in the end it had all the substance of a marriage,” he said.

Cardinal Ruini said that a lack of provision for conscientious objection on the part of doctors and other medical professionals is “one of [the law’s] most serious defects.”

Among the Italian right-to-die activists photographed celebrating the “living will” bill’s passing was the Radical Party’s abortion pioneer Emma Bonino. She was sitting in the Senate chamber with Piergiorgio Welby’s widow Mina Welby when the voting results were displayed. Bonino is famously considered one of Italy’s “forgotten greats” by Pope Francis.