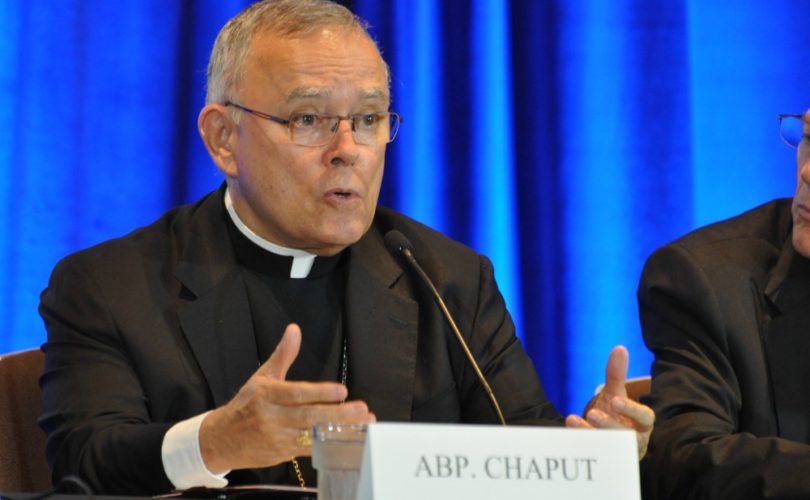 TEXAS, November 10, 2017 (LifeSiteNews) — The “obvious controversy” that surround’s Pope Francis’ exhortation on marriage and family Amoris Laetitia (Joy of Love) has “obscured much of the good in the document,” said Archbishop Charles Chaput of Philadelphia in an address on Wednesday.

But despite “passages of great wisdom and beauty on marriage and on family life,” Chaput said that “persons of fidelity and substance” who have criticized the exhortation for problems such as seemingly opening a door to the divorced and remarried to receive Holy Communion “can’t in justice — be dismissed.”

The Archbishop may have been referring to the four Dubia Cardinals and others, such as the signers of the Filial Correction and Father Thomas Weinandy. He made his remarks at the third annual National Assembly of Filipino Priests in Houston, Texas.

Chaput said that the exhortation has created “pastoral challenges” regarding what it means for priests to accompany straying Catholics and to be merciful to them, especially when it comes to Catholic teaching on marriage and sexuality.

He said that the key for interpreting the exhortation comes from paragraph 2, which reads in part: “The thinking of pastors and theologians, if faithful to the Church, honest, realistic and creative, will help us achieve greater clarity” in addressing the issues that face today’s families.

Commented Chaput: “The key words there are ‘if faithful to the Church.’ Fidelity to the received and constant wisdom of Catholic teaching is paramount.”

The Archbishop said that his own guidelines on implementing the exhortation in his archdiocese were based on this key passage. Chaput’s guidelines, released July 2016, unequivocally state that divorced and civilly remarried Catholics may not receive Holy Communion unless they “refrain from sexual intimacy.” One of Pope Francis’ most outspoken American supporters, then-Cardinal-designate Kevin Farrell, slammed Chaput’s guidelines as causing “division.”

As liberal interpretation swirl about, suggesting that the Church is weakening her teachings about marriage and sexuality under Pope Francis, the Archbishop said in his address to priest that Jesus makes it clear in the Gospels that a valid marriage cannot be broken.

“Scripture’s clearest words about the indissolubility of marriage come from Jesus himself in Matthew 19. They can’t be softened, or reinterpreted, or contextualized. Christian marriage is a covenant between one man and one woman. When valid, it endures until the death of one or the other spouse. And our task as priests is to uphold and advance that truth as a message of liberation, even when it’s difficult,” he said.

The way to proceed amidst “confusion,” said the Archbishop, is to interpret the document and it’s key terms so that it is “consistent with the magisterium of previous popes.”

“Accompaniment” must be interpreted as guiding people “in the right direction – gently but also honestly, speaking the truth with love.”

“It does no one any good if we ‘accompany’ someone over a cliff, or even worse, to a fatal separation from God. We can’t simply confirm people in their mistakes. Scripture is very clear about right and wrong sexual relationships and behavior. We’re very poor disciples if we lack the courage to speak the truth as the Church has always understood it,” he said.

“Mercy,” which “depends on the existence of justice and truth,” must be interpreted as never excluding “careful moral reasoning about right and wrong,” he said.

“Permanent truths exist about human nature, sexuality, behavior and relationships. Those truths apply to all of us, in all circumstances, and justice involves living according to those truths,” he added.

“Marriage” must never be interpreted as “simply an ‘ideal’” — which “tends to open the door to excusing and then normalizing failure” — but as a “permanent, loving bond between a man and a woman open to new life.”

“We need to fight for it, and not collapse – like so many other Christian communities — into the confusion of a society based on compromises, caveats and alibis. That’s the message we need to preach and teach,” he said.

The Archbishop ended his talk by encouraging priests, that even though the Church of the faithful “will very likely be smaller, poorer, and empty of prestige,” they should not lose hope.

“God doesn’t ask us to save the Church or fix the world. That’s in his hands. What he asks is much simpler and more important. He asks each of us as priests to be faithful, and to be his healing presence to his – and to our – people,” he said.

Chaput said that no matter how “intractable or unfixable the problems of a marriage or family might be, the priest who listens and counsels with a spirit of mercy guided by truth is doing what God called him to do: to be the presence of God’s love in the world.”

“There’s no greater mission of mercy than that, and no greater joy in the life of a priest,” he said.