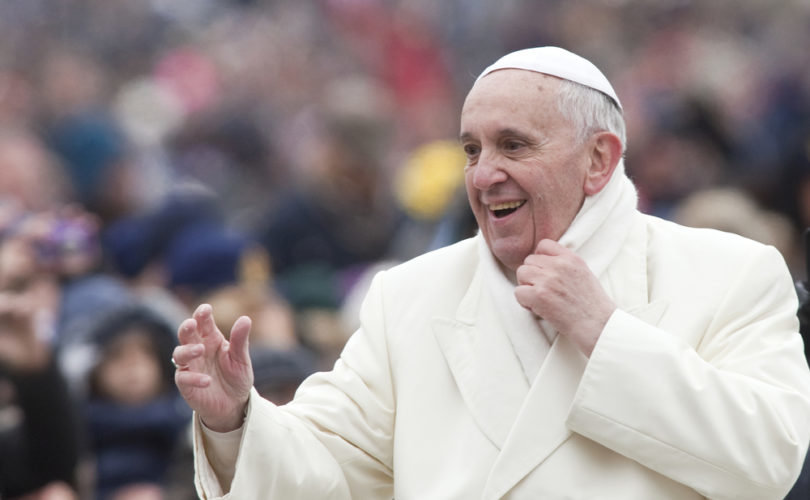 ROME — Pope Francis decried “attacks” on the family and a growing “relativism” regarding the religious understanding of marriage during a meeting with the Schönstatt Apostolic Movement held in the Vatican this weekend.

In his spontaneous remarks, Francis said the many attacks on the family are “very sad” and “very painful,” pointing out that while there are now many “new forms” of unions being proposed, such unions are “not marriage.” “It’s an association but not a marriage. And sometimes we have to say very clear things and we just have to say it.”

During the event married couples asked prepared questions, with Francis answering off the cuff.

The first couple said, “The Synod that has come to an end has helped us to become aware that many cultures no longer have a clear concept of the family.” They asked what advice Pope Francis had for those who want to “accompany our brothers and sisters who still feel unwelcomed in our Church? And to better accompany our young couples and families so they can become an irresistible and living proposition to those seeking a way to fulfillment.”

Without notes or a prepared text, Francis replied that the family “never was so attacked as it is nowadays. Directly attacked or really attacked.”

“Maybe I’m mistaken,” he added. “The historians of the Church would know how to tell us. But the family is under attack.”

As a solution to this crisis, the pope repeated many times that there must be “body-to-body accompaniment” from those in Christian marriages with those who reject the religious concept of marriage. The “pastoral help” the Church must offer to people in irregular situations, he said, “has to be body-to-body.”

“That means accompaniment. That means to lose time. The great master of losing time is Jesus. Jesus who accompanies so that the consciences are cured. To teach, to accompany means to make a way together.”

Pope Francis added that it is “evident” that “the Sacrament of Matrimony has been devalued,” and has been reduced to merely a “rite.” “And then the sacrament is just a social matter, not so much religious but the strong thing is the social [aspect] and not the sacrament.”

He related that many times in his pastoral work he had found that young people showed little interest in the idea of sacramental marriage, focusing only on material and social concerns. Often, he said, he would ask a couple why they don’t get married, and they would respond that they don’t have enough money for the wedding party. “So the social is the most important part and not the sacrament,” he said.

He added that the poor or too brief preparation by parishes for couples entering marriage is a “sin of omission on the part of the pastors.”

“Especially because we want to save families and the sacrament, the accompaniment has to go much, much further. And it has to be body-by-body, to prepare them, to talk to them, to tell them what they are supposed to do because many do not know what they do,” Pope Francis said.

The pope also spoke of the harm done to children when parents separate or divorce. “So we would need to have something to accompany those children… Many of those children have to suffer from one parent talking negatively about the other parent and vice versa.

“So there is a big challenge to accompany those children but also to make the parents conscious of what they do to their children.”

Pope Francis admitted that the acceptance of cohabitation without marriage had even reached into his own family. “In my own family I have seen a couple, who from Monday to Thursday, live together and from Friday to Sunday they live with their parents. And this doesn’t work, because there is no marriage. And the consequence is divorce, separation.”

“And therefore, we have to accompany body-by-body,” he said again. “Not doing proselytism, because it does not work. But to accompany, personally accompany, with a lot of patience. A word today, an attitude tomorrow, that’s what I suggest to you.”

Another couple asked how they could live a “missionary spirit” in an age when few are believers. They said, “The environment in which we live makes it difficult for us to live out this missionary zeal. Often we are surrounded by young people who live out happy lives, they appear to be fulfilled and lead a life of solidarity for others, but lack the experience of an encounter with Christ. They don’t feel the need for faith.”

Francis reiterated his previous warnings against “proselytism,” citing an expression of Pope Benedict XVI: “The Church doesn’t grow by proselytism, but by attraction.”

“The attraction of the testimony. First, counselling, testimony.” The pope received a burst of spontaneous applause when he added, “To live in such a way that others also want to live like us.”

“To live in such a way that others, they want to ask ‘why’. The testimony. The way of testimony. There is no alternative to giving Christian witness,” he said.

“We [Christians],” he added, “don’t save anybody. We are just those who transmit the one who saved us. And that we can only transmit if we in our lives, in our history, if we embody that one who is called Jesus. That means testimony.”