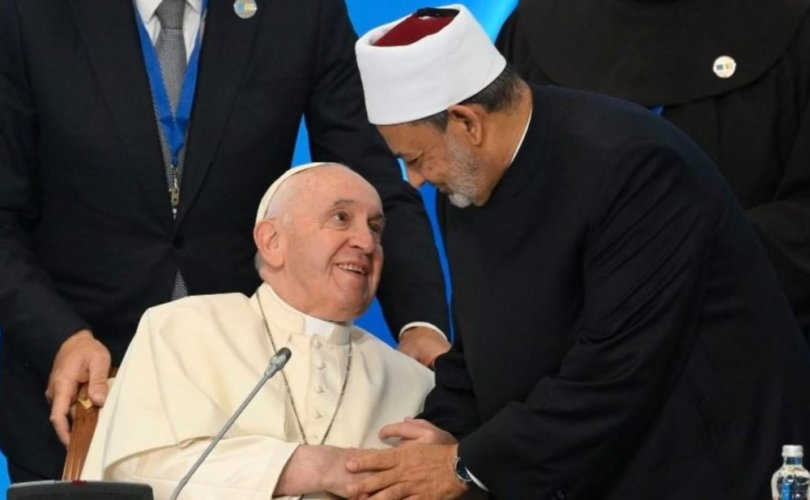 NUR-SULTAN, Kazakhstan (LifeSiteNews) – In an address to the interreligious meeting Pope Francis is currently attending in Kazakhstan, he defended religious plurality and decried “proselytism and indoctrination.” While the Pontiff quoted extensively from a non-Christian philosopher during his speech, he did not reference the Bible or the Catholic faith at all.

Pope Francis delivered his address on September 14 as part of the opening session of the 7th Congress of Leaders of World and Traditional Religions held in Kazakhstan. LifeSiteNews has provided an in-depth analysis of the event, which can be read HERE.

A number of religious leaders were present, including (among many Muslim leaders) the Grand Imam of Al-Azhar, Ahmed el-Tayeb; Sephardi Chief Rabbi of Israel Yitzhak Yosef; and Buddhist, Shintoist, Taoist, and political leaders.

Addressing the Congress participants, Francis ignored the numerous religious differences of the various representatives and stated that their “religions” remind them that they are “journeying towards the same heavenly goal.” “Our shared nature as creatures thus gives rise to a common bond, an authentic fraternity,” he said.

Everyone has ‘right’ to promote his own religion

Employing language and themes of “religious freedom” that have predominated since the Second Vatican Council, Francis declared that such “freedom” was “an essential condition for genuinely human and integral development.”

He also employed numerous quotations from Kazakhstani philosopher Abai Kunanbaev – born into a Muslim family during the 1800s – to defend his concept of “religious freedom.”

“Religious freedom is a basic, primary and inalienable right needing to be promoted everywhere, one that may not be restricted merely to freedom of worship,” Francis said. “Each person has the right to render public testimony to his or her own creed, proposing it without ever imposing it.”

He added that such a form of religious “preaching” was the “correct method,” while claiming people are “called to step back” from “proselytism and indoctrination.”

A “society marked by the respectful coexistence of religious, ethnic and cultural differences is the best way to enhance the distinctive features of each, to bring people together while respecting their diversity, and to promote their loftiest aspirations without compromising their vitality,” he said.

Francis did not mention Jesus Christ by name at all, and predominantly used more ecumenically acceptable synonyms for God, such as “Almighty, Creator, the Divine.”

The Pope closed his address by appearing to argue that the plurality of religions celebrated at the Congress was willed by God. He called on the assembled delegates to “ … firmly maintain our own identities, open to the courage of otherness and to fraternal encounter. Only in this way, along this path, in these dark times in which we live, will we be able to radiate the light of our Creator.”

Yet, Francis’ words come in contradiction to those of his predecessors in the Papal Throne. As noted by Catholic Family News managing editor Matt Gaspers, Pope Leo XIII condemned the theme proposed by Francis in his 1888 encyclical Libertas.

.@Pontifex today in #Kazakhstan: “Each person has the right to render public testimony to his or her own creed, proposing it without ever imposing it.” @religionscongkz

Pope Leo XIII: “…it is contrary to reason that error and truth should have equal rights.” (Libertas, n. 34) pic.twitter.com/Rt7dWvhnHm

Referring to the Church’s relation with other religions, Leo wrote that the Church “does not forbid public authority to tolerate what is at variance with truth and justice, for the sake of avoiding some greater evil, or of obtaining or preserving some greater good.”

The Catholic Church tolerates “certain modern liberties, not because she prefers them in themselves,” Leo wrote, “but because she judges it expedient to permit them, she would in happier times exercise her own liberty; and, by persuasion, exhortation, and entreaty would endeavor, as she is bound, to fulfill the duty assigned to her by God of providing for the eternal salvation of mankind.”

Notably, while Francis liberally promoted the plurality of many religions at the Congress, Leo wrote against such a stance: “one thing, however, remains always true — that the liberty which is claimed for all to do all things is not, as We have often said, of itself desirable, inasmuch as it is contrary to reason that error and truth should have equal rights.”

While the primacy of the Catholic faith was completely ignored in the address, Pope Francis did propose some of his regular talking points, including ecological actions, his much promoted form of “fraternity,” and the promotion of world peace.

— Article continues below Petition —
PETITION: Canonize Navy chaplain Fr. Capodanno for giving his life to save souls
Show Petition Text
6974 have signed the petition.
Let's get to 7500!
Thank you for signing this petition!
Add your signature:
Show Petition Text

In his promotion of global peace, he also appeared to reject the Church’s teaching on just war. God “guides us always in the way of peace, never that of war,” the Pope said. He continued by referencing what he called “the only means blessed by heaven and worthy of man” for resolving conflicts – namely, “encounter, dialogue and patient negotiations, which make progress especially when they take into consideration the young and future generations.”

However, throughout the centuries, the Church has laid out conditions under which waging a war is in fact acceptable. Drawing from Scripture and the Fathers of the Church, St. Thomas Aquinas proposed three factors to be met for a war to be just:

The Pope also made a moderate defense of the unborn, decrying the “throwaway culture” by which “each day children, born and unborn, migrants and elderly persons, are cast aside, discarded.”

“Many of our brothers and sisters die sacrificed on the altar of profit, amid clouds of the sacrilegious incense of indifference. Yet every human being is sacred,” he said.